by augsburgeroberst November 13, 2019
Is that possible?

In Scotland it is! Between leaving home in East Kilbride and arriving at the Craigellachie Hotel near Dufftown we passed through or within one mile of eight battlefields.

The destination was a beautiful Georgian era bridge over the River Spey at Craigellachie on which three famous Highland regiments ended their independent histories in 1994.


In sequence of the Outbound leg:

Bothwell Bridge 1679: Covenanter forces fighting against a Royal army under Monmouth. This resulted in the rout and destruction of Covenanter forces. The A725 cuts right across Monmouth's deployment area.

Bannockburn 1314: The totem engagement of the Scottish Independence Wars. King Robert defeats Edward II's English Army before Stirling Castle. Although the precise location of the two armies is still debated, the M9 is likely to cut or skirt the edge of the battlefield.


Stirling Bridge 1297: Wallace and Moray's forces defeated de Warenne here although the Braveheart version is much tortured and distorted. The M9 crosses the Forth and down river a few hundred metres is the likely spot of the battle.


Sherriffmuir 1715: The Earl of Mar fought with Campbell of Argyll in the indecisive November battle which was the major engagement of the 1715 Jacobite campaign to regain the throne for the House of Stuart. The A9 passes the battlefield which sits upon the high ground south east of the road.


Tippermuir 1644: The Marquis of Montrose's first victory against his Covenanter opponents took place in the open ground to the left of the A9 a couple of miles out of Perth. The road skirts the battlefield on its south east side and the scene of the action (at village now known as Tibbermore) is visible from the road as you pass.


Dunkeld 1689: Site of the Cameronians' first engagement in their desperate struggle against Cannon's Jacobite Army which had shortly before had been victorious at Killiecrankie a few miles north. The A9 passes directly by Dunkeld which lies to the east of the road across the fast flowing River Tay.

Killiecrankie 1689: The infamous A9 passes directly through the area in which General Mackay's Williamite army lined up only to be swept away by Graham of Claverhouse's Gaelic force of Scots and Irish.


Cromdale 1690: The much sung about Haughs of Cromdale on which the remnant of Dundee's Jacobite Army under Thomas Buchan was scattered during an indecisive action against Livingston's Williamite troops from Inverness.

Of course five of these battles are of particualr interest to me and perhaps to visitors to the Blog. It's a while since I ventured up north and it was wonderful to reconnect with the breathtaking beauty of Scotland.

At the end of our trip the beautiful bride and handsome groom tied the knot next to the Spey and he piped her down the aisle by himself playing Dougie Maclean's wonderful ' Caledonia' which I would much prefer as a national anthem to that dirge Flower of Scotland.

With my English surname I rarely pull on the pantomime Scotsman outfit but on this occasion I seccumberd to peer pressure. 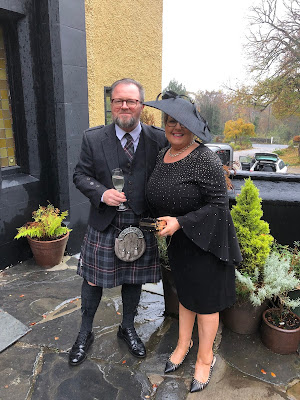