Whilst in Den Haag Toggy spotted an article about the fortress town of Brielle and its capture by the Sea Beggars during the Eighty Years War. Do you know anything about this? he asked. Nope was the unhelpful reply from your truly.


As we were heading south west to Antwerp and it was roughly in the direction of travel, we agreed to visit with no fixed expectation.

Having experienced the unabashed industry and wealth of Europoort's enormous footprint we were astonished to arrive in the tranquillity of Brielle, less than three miles and about 500 years away from the 21st century commerce of Europe's largest commercial hub.


We spent a fascinating day finding out about Brielle and its history There is a great museum giving details of the 80 Years War struggle against the Spanish and famous naval commanders from the town such as Tromp ( the elder) and Witt de Withe.

We walked some of the outstanding defence works and spent time at the Molenbolwerk (Mill bulwark) which is one of the numerous intact bastions with interesting display boards (unfortunately I do not speak Dutch but they were visually informative). Holland's own Menno van Coehoorn (he of mortar fame) was responsible for the upgrading of the Brielle fortifications during the period which is the core focus of this blog.


There was reference to strengthening of the defences during the War of the Spanish Succession by Coehoorn. It would have been easy to spend a full day at Brielle but we had about three hours in which we managed a walk around the north eastern defences, a visit to the museum, a visit to St CatherijneKerke and a nice lunch! The enormous church was once the largest in all Holland but was never finished, partically burned down and finally completed as a Protestant Kerke having started as a Catholic church of cathedral proportions.


In the museum we found some interesting stuff about one of my interests - the Dutch East and West India companies along with some genuine 16th century arms and armour a cannon recovered from a wrecked warship and various other information relating to the arch villain (well from a Dutch perspective anyway, The Duke of Alva).

More references to the Dutch eating people during times of siege/ famine and distress.. a governor offering his body to his town as food during a siege! Maybe everyone did it and the Dutch are the only ones honest enough to admit it. It did become somewhat of a theme after the horrors of the De Witt brothers. 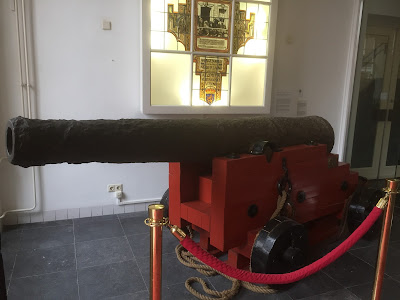 We did get a sense with the story of that late 16th century giant Johan van Oldenbarnevelt that crossing the House of Orange in any way was tantamount to sticking two wet fingers into a live electric socket! Maurice of Nassau (later Maurice Prince of Orange) had him tried and executed in 1618, probably for being too powerful. Taken in conjunction with the fate of Cornelius and Johan de Witt at Den Haag in 1672, also probably executed for being too powerful (this time by our old favourite Willem Prince of Orange later William III) the House of Orange was definitely to be feared even (especially?) if you were Dutch!
Share Share on Facebook Tweet Tweet on Twitter Pin it Pin on Pinterest
Back to The League of Augsburg