A horde of new GNW Russians from Warfare Miniatures 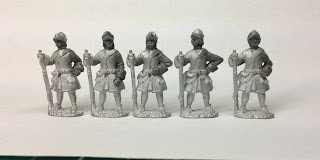 My my! Clibinarium has been very busy since the beginning of the year. The other evening a late email brightened up the wee small hours by offering a large number of photos of new Russina infantry masters.

We now have all of  the existing musketeer code types with the Russian soft hat sometimes called pokalem, sometimes it appears using the name karpus. Whatever it is called, it is NOT in the traditional style frequently modelled on wargaming figures.

Clib has been closely observing Russian GNW re enactor groups to see what they are wearing. This rather stylish and semi Middle Ages/Renaissance style headgear is what has been chosen as the option for our Russian who are not sporting the ubiquitous tricorne.

In addition, Clib has done the defending infantry poses both for pikemen and musketeers with bayonets. These are rather splendid as I am sure you will agree.

As if this is not enough, Clib has worked up the first iteration of Swedish grenadiers. The headgear chosen is not that used on the test sculpt of 18 months ago but the more common tall mitre. 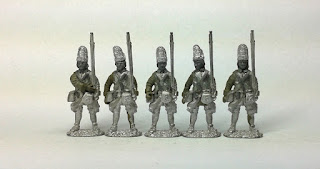