A wee taster.. With Talon and Claw.. news

With Talon and Claw
The reason? Eagles and lions with their talons and claws appear in almost all of the arms of the combatant nations of the Great Northern and Eastern Wars - Swedes, Danes, Saxons, Prussians, Poles, Imperialists and Russians.... they were all tearing at each other for years.
It may seem that I have been at this book for years but we are almost there. As a little bit of hard evidence I wanted to let anyone interested (and it seems that there are a fair few of you) have a shufti at some of the material going into the book. In fact, although the is no official release date I already have pre orders! Some of you were so keen that you got your shout in early. Thanks for that.
The book is effectively laid out and currently awaits the final positioning of some artwork, final proof reading and a few photographs which I have been working furiously to finish.
I can say the final page count looks like 184 making it a fair bit larger than The War of Three Kings. The 3rd edition WTK is required to use the supplement as many of the core rules are not repeated in the new book in favour of including supplementary material and source material for gamers. 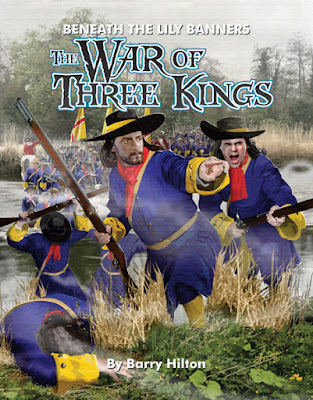 The internal illustrations are up to Clarence's usual excellent standard. The cover was specially commissioned from Neil Roberts who created an outstanding piece of artwork capturing the spirit of the age.


Play testing has continued literally up to the final moments with small tweaks being made here and there as we go to press sometime over the next three to four weeks.
Realistic release date looks like June but that really depends on a couple little variables. The very good news is that it is definitely happening as you can see. For those interested in the period but who don't yet have The War of Three Kings we'll do a bundle deal on the new book's release.

Although we haven't fixed a cover price for With Talon and Claw all pre orders have been taken at £30.