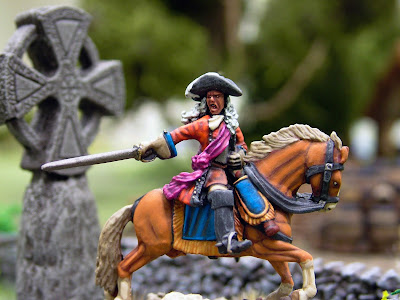 Never did I realize when I started this little review how many painters have actually sent me pictures of there work with Warfare Miniatures.

I should really be surprised because we've sold about 20,000 packs since we started so there are a few out there in Wargames Land.

Dannie Fogleman was one of the people behind getting the GNW range off the drawing board and into production.  He has made a significant volume contribution to painting and displaying his troops as can been seen from these two battle shots.

In this third episode of other painter work we've got some lovely stuff from relatively recently and from way back at the beginning of Warfare.


Peter McCarroll is a very fine brushman and extremely prolific. He completed several squadrons of Williamite Horse for adventures in Ireland.


Pat Connor is yet another outstanding brushman and here are some examples of his talent applied to Warfare Miniatures.


A great customer who is producing some very fine work these days is the enigmatically named 'Gunfreak' aka Truls from the fjords of Norge.


Truls is a very prolific chap and has produced a large number of units in a relatively short space of time.

I have liked everything he has done but I think the Goltz Dragoons are some of his best work to date and am very proud that he has shown them on the internet.

Brian Philips is another excellent painter who has lavished some time on the Warfare range. These models were some of the very first painted about six years ago.