Barry does WSS? Yes, but not as you know it!

Inspired by a post on the Mad for War Facebook Group I created and played the Battle of Punta Cabrita (Marbella) March 10th 1705, within 24 hours of reading the historical background. A French squadron which had been attempting to recapture Gibraltar for the Bourbon cause is attacked as it withdraws from Bahia de Gibraltar, off Punta Cabrita which is literally at the mouth of the bay opposite the Rock. 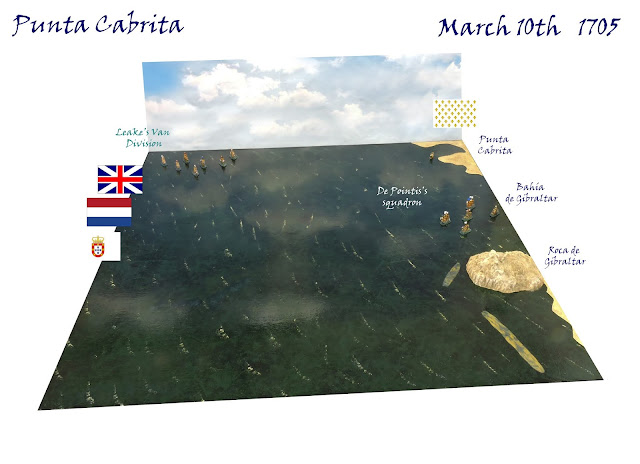 I set the game up and played it but did not quite get the historical result. Both sides formed line of battle and their formations snaked amongst each other. It was pretty evenly balanced until three Allied ships surrounded Arrogant  pummelled her and as a result she exploded damaging most of them and some vessels on her own side. This forced a squadron check for Leake. He failed and had to withdraw allowing the French to continue their journey up the Andalusian coast.

Seeing that the scenario had legs, I allowed the French to crawl north east until they were off Almuñécar. At this point, three days later, Leake finds them again and this time he has several fresh ships drawn from his large pool of resources. The French, down to four vessels with three carrying battle damage from the 10th, are hugging the coast in an attempt not to be surrounded. They sail further inshore and behind a long line of sand bars. 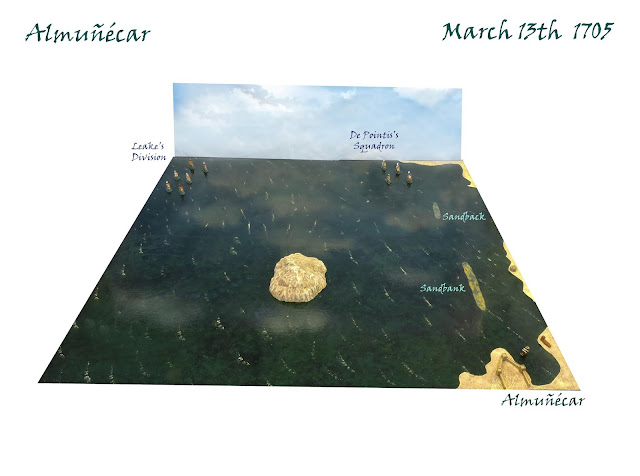 Leake's division splits, crams on full sail and comes at the French from two ends - Portuguese and Dutch ships attack the head of the French group whilst Leake's English ships with van der Dussen's Verluwe chase the tail of the escapers. Aggressive moves by the Allies were met with an enormous slap when Lys and Marquis almost sunk Verluwe with combined fire from their heavy guns.

Van der Dussen had lost his previous flagship Aemelia at Punta Cabrita and was still ringing the calamari and sea water from his hat as this second tragedy unfolded. Panther got in behind the French line narrowly avoiding grounding on a sandbar.

At the head of the line both Nossa Senhora de Assuncao and Overjissel tried but failed to board Ardent. Sandwiching her between them they pumped fire in from both sides with gun muzzles scraping against each other. The French ship fired a spectacular double broadside badly damaging the Dutch ship. Alas, she was overwhelmed and struck.

Leake, incensed by the destruction of Verluwe attacked Marquis with Revenge, boarded her from the starboard quarter and took her in a very short, sharp combat. On seeing this, the two heaviest French ships - Lys (86) and Magnanime (74), trapped in a channel between the sandbank and the coast - struck their colours and the job of March 10th was completed on March 13th. Almost the historical result but 100 miles up the coast and three days late.

Great action - well played Dave and Colin who split the Allied command. I was de Pointis. Welcome to the War of the Spanish Succession at Sea!