I used Mad for War combining the galleys and square rigged rules sections (which is what the rules can do easily). The points values for each fleet are about 2,250. The Christian coalition of Spanish, Portuguese, Venetians and Maltese has 12 ships and the Ottomans 13.

The Ottomans are holding a coastal position protected by shoals and islands. The large galleons are finding it difficult to navigate in these straitened waters. Within three turns the large Ottoman galleon (their only one) ran aground as did a Portuguese caravel.

The battle opened with the Portuguese ships Berrio and Reis Magos firing into the northern group of Ottoman ships. By turn 5, the Christians had lost one bergantine, captured in combat and the Ottomans had lost a fusta. 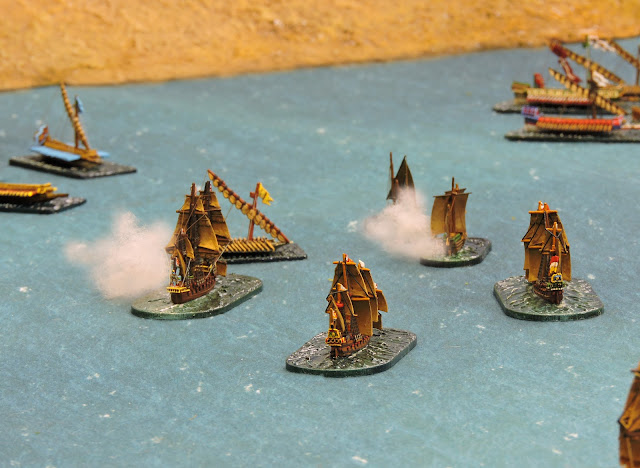 Two galleons were in trouble. Reis Magos was crippled and had taken heavy casualties in combat whilst the Spaniard Anunciada had cut her cables to escape being overwhelmed by a large enemy galley.

The larger Christian units are approaching the action as we move into Turn 6. Several other ships have been damaged by gunfire and the galley's forward cannon have been very effective.

The action will conclude soon.