Two battles in particular inspired me to create a composite scenario based around the naval actions in the western Indian Ocean.

In 1638 Pedro da Silva resoundingly defeated Admiral Westerwolt's Dutch fleet at Goa whilst in 1639, a Dutch squadron under Cornelis van der Veere destroyed three Portuguese galleons two of which, were decommissioned for caulking at the time. This happened near Goa.

The attraction of these actions is obvious from wargaming perspective. They may seem a little out of my period but, 1639 is close enough! It also gave me a chance to use some of the ships I had prepared from the earlier 'Armada period range'. In the 1630s, ships of the older carrack/galleon design were fighting side by side with the newer frigate style warships which would dominate between 1640 and 1720.


I have put two squadrons of equal points at sea and set the fighting in the waters off Goa. Having visited the area and spent time in 1600 century Reis Magos fort at Goa, I was very attracted by playing this game. 655 points for the Portuguese and 665 for the Dutch. In the end the handicap of 10 proved irrelevant. 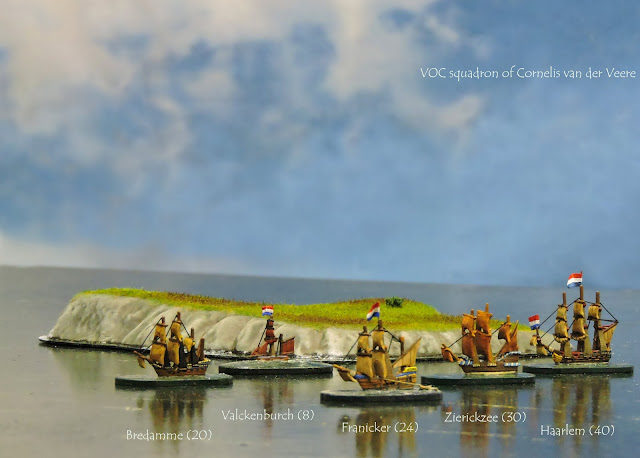 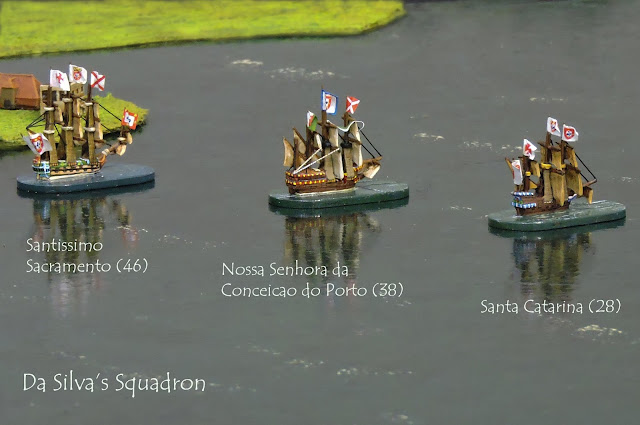 
The Dutch ships with the exception of Haarlem, the flagship which was Veteran, were all Drilled. The Portuguese ships, all Veteran.


Like every game, I enjoyed this one immensely. It was tight and went to sixteen turns with a win either way possible right till then end. Despite making what I now believe was a glaring tactical error for the Dutch on the very first turn, van der Veere's squadron hung in there. This battle  came closer in my opinion, to mirroring the real action of the period, than anything I have managed so far with the rules. Without giving the result away, by the end of the last turn, every ship was still, in some fashion, afloat. 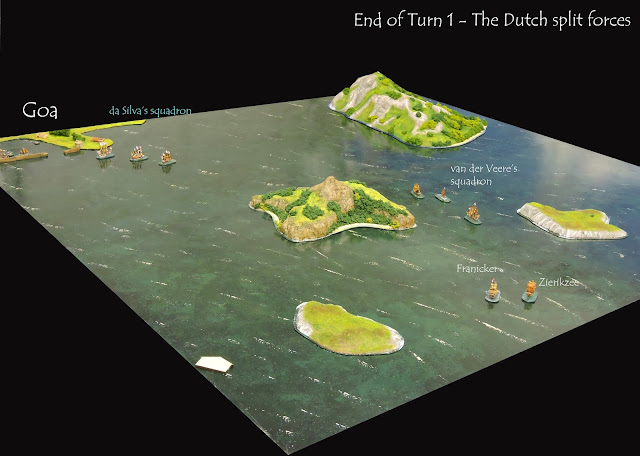 The wind was a fresh north westerly. The choppy seas were not to affect gunnery from either side because no ship carried heavy guns. The Dutch squadron began the battle west of Goa and split in two in an attempt to envelope the enemy.


After the first turn I realized that the course taken by da Silva would mean two Dutch ships would be isolated from the action for perhaps five or more turns which would allow the Portuguese to bring the weight of their cannon to bear on some of the more vulnerable of van der Veere's vessels.

Shooting began on turn 3 when the small Valckenburch opened fire on the galleon Nossa Senhora. The rounds missed target. The direction of both squadrons took them dangerously close to an island and in last minute manouevres to avoid the inevitable, Valckenburch collided with Nossa Senhora, der Veere's flagship Haarlem crunched into Santa Catarina and Bredamme, misjudged her turn and ran aground bow first on the island.


No sooner had der Veere disentangled his ship from the collision than she found herself exchanging gunfire with the enemy flagship. The Portuguese gunners showed great skill and the opening broadside from Santissimo Sacramento completely dismasted Haarlem which had sustained considerable damage in the accidental collision but a few minutes before. This high drama of this opening exchange suggested the action may be short and sharp. 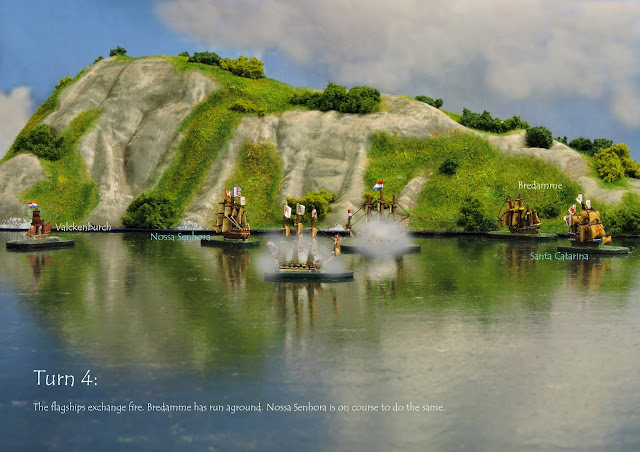 The fresh wind drove the powerless Haarlem steadily inshore toward the island. To be without the biggest asset in his squadron and to be himself trapped aboard her, gave  van der Veere's Dutch little hope of victory. 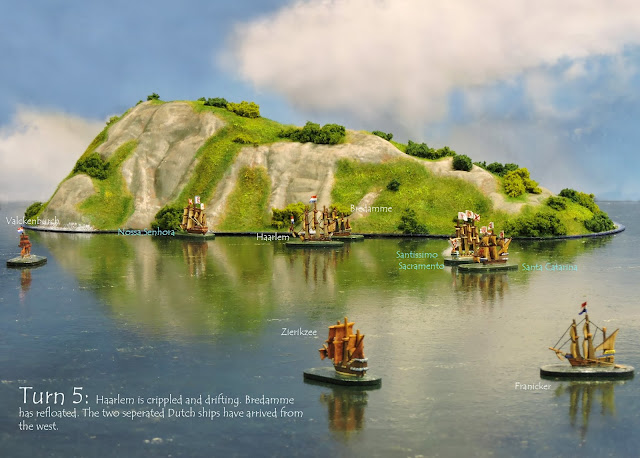 On turn 5, Santissimo Sacramento landed several more hits on Haarlem and only the presence of der Veere prevented her crew from abandoning ship and seeking sanctuary on the island which was by now less than 100 yards distant.

A little cold comfort was drawn when the commander of Nossa Senhora also misjudged his turn running the ship around a few hundred yards further down the beach from Haarlem. Furious efforts by the crew of Bredamme had managed to re-float her from a point about half a mile east on the very same stretch of beach.


Until the belated arrival of the detached vessels on turn 7, the Dutch had played cat and mouse simply trying to survive. At one point, only the tiny Valckenburch was in any kind of active position to oppose the entire enemy squadron. As Zierickzee and Franicker swung into action from windward, Santa Catarina was first to experience damage from these ships.

Several ships began a weaving dance of engaging with targets coming to bear and disappearing quickly during turns 7-10. Franicker received the attention of da Silva's flagship in a running fight during which she sustained considerable damage. Valckenburch was subjected to a bow rake which crippled her causing the little ship to continue to sail in a counter-clockwise circle for the remainder of the action.


By turn 8, Nossa Senhora had re-floated with minimal damage and it seemed the Dutch would be overwhelmed. In desperation, van der Veere had lowered a longboat and rowed out to meet the Zierickzee which was making speed toward the stranded flagship and was back in the fight in command of his second most powerful vessel which was almost undamaged, by Turn 11.

With his squadron ripped apart and scattered, the redoubtable van der Veere tried desperately to recover some semblance of order amongst his outgunned command.

The battle reached its height during turns 13 to 15 and in a tight space, multiple exchanges took place with the Portuguese having the best of the gunnery. One ship was notable both for its single-handed performance and survival.

The little Bredamme, despite damage from her earlier grounding, was mobbed and shot at by all three enemy ships, each of which outgunned her. Holding her nerve and sustaining mounting damage, she did not surrender nor leave the battle and was finally pounded to a hulk by weight of fire.


The Portuguese ships had been sustaining low intensity but mounting damage and by Turn 16, da Silva's flagship in particular, was reaching a dangerous level of deterioration.


Even the mast-less and crippled Haarlem found herself back in the fight as ships sailed by. Her gunners, emboldened by the heroic exploits of Bredamme in particular, scored hits on two enemy ships.

On turn 16, hanging by a thread, the Dutch had a final chance to grasp victory but in the exchange, their less experienced and tired gunners were not up to the challenge. The veteran Iberians continued the relentless tally of hits and with Bredamme smashed and sinking and Valckenburch circling in isolation off Goa, the Dutch squadron failed its squadron check and broke off.


The Portuguese viceroy, content with this exhibition of naval supremacy, ordered his three battered ships back to the safety of port sweeping up the Valckenburch en route. Van der Veere's two serviceable ships huddled round the crippled Haarlem deciding how best to get her off the bottom and under tow.


A Portuguese victory scoring 369 points to the Dutch 309. Two Dutch ships were lost - Valckenburch - crippled and captured after the action and Bredamme shot until partially sunk. 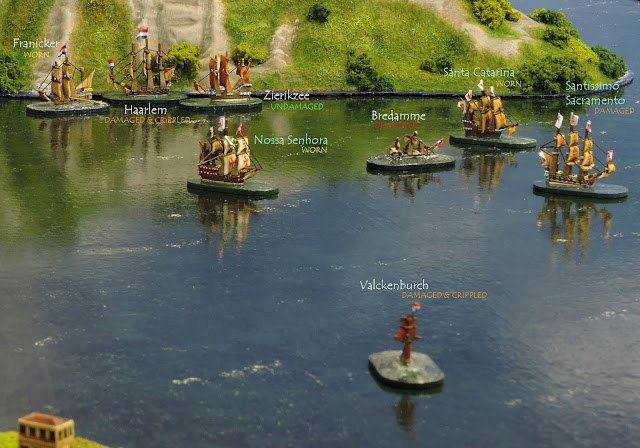