by Barry Hilton August 29, 2013
Barry Hilton - Clarence and I have been delighted with the steady growth in Beneath the Lily Banners players. The rules have now sold an impressive 2,000 copies since their release in 2008. Not a blockbuster we'd be the first to admit but in wargaming rules terms this is a success and certainly the rules have been  commercial viable.

Part of the success has definitely been due to the way we have supported the rules via the Fighting Talk forum, through articles in the magazines, with published scenarios and explanations for players to get more of a feel for the period and for the mechanisms and thinking behind each rule idea.

Further traction has been gained by running our League of Augsburg weekend gaming extravaganzas and letting players get a sense for the period in a larger setting than can normally be achieved in a home game set up.

On the last weekender I introduced Brigade Roster Sheets which did a little more than record casualties and whether a unit had fired its First Volley. I attempted albeit in brief, to give a flavour of the brigade in a short narrative. A little background behind the wee lead chappies being pushed around the table and causing such heartache for the Gladiators in charge! This format also permitted some special scenario specific conditions to be noted for particular units or brigade commanders. Sometimes the conditions or special rules were advantageous and sometimes not! Further period character was instilled through long held grudges and the personality idiosyncrasies of colourful individuals. 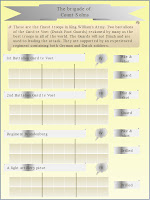 A quick walk through the Roster will help users. In the top scroll should be placed the name of the brigade for example The Brigade of Count Solms. In the larger scroll area below an optional description of the brigade and its constituent units can be given. Any special rules pertaining to the units, weapons, opponents or commanders can be detailed here.

The sheet allows for four units to be recorded. The section with 18 boxes represents the total number of models in an infantry battalion. A line separates each group of 6 boxes. Each therefore represents a stand of models. When a casualty is received simply mark or cross the appropriate box on the grid.

Two scrolls on the right hand side of the grid allow players to note the unit type ie Pike and Shot or All Musket. The scroll below is used to note the training/morale level of the unit ie Drilled.

The small cloud of smoke on the top right of each grid is not a touch of frippery! In this cloud cross or write FV when the unit has delivered its crucial FIRST VOLLEY. 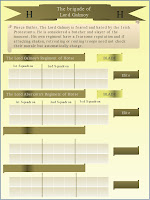 The grid can of course also be used for brigades of Horse. Each 6 box section of the grid represents a squadron. One, two and three squadron regiments can be accommodated on a single grid with the numbers 1,2 and 3 being noted at the top of each 6 box section to represent the appropriate squadron. A four squadron regiment will require the use of two grids. The scrolls on the right hand side of the grid can be used to note Bullet or Blade type together with the quality of the unit as per the infantry notation.

Artillery can be easily fitted into the grid system too.

Requests for access to these sheets by some attendees of the games led to Clarence volunteering to professionalize my amateurish Power Point effort. The result in my opinion, is very Harrisonesque and appealing! Here on this thread you can see the evolution from the raw form through to a filled in example through to a downloadable and extremely smooth professional version which is of course free! Use it as much as you like. 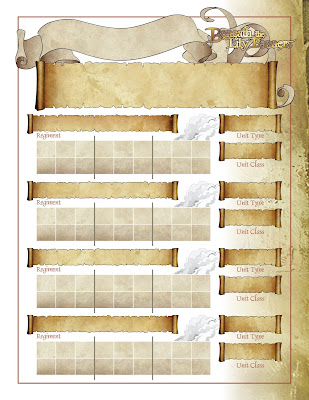 We hope it comes in useful. Thanks for requesting it, thanks for doing a bang up job Clarence!