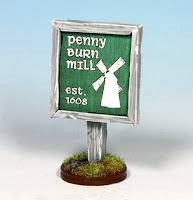 Clarence Harrison - Work is winding down on preparations for our Historicon game. I still have two squadrons to paint which will be the work of a few weeks. I have a couple of brigadiers to paint, a few small terrain bits to add, and I still have a 2x2' section of the board to finish, but I took time out last week to dig into the little extras that add an extra layer of detail (and fun) to a tabletop game...

First up, to the left is a sign for the famous Penny Burn Mill. The graphics for the sign was produced on the computer and I glued it to a thin sheet of balsa and built a frame around the face with more strips of wood. The base is a pair of washers filled with green stuff that I sunk the post into. The result is very bottom heavy and difficult to tip over without a substantial bump!

Next up are civilians - I think these are all Foundry models, but I may be mistaken as they came out of one the numerous bins I have stored around and were not purchased recently. It's fun to break up all of the rank and file with a few colorful characters, speaking in this case of their personalities rather than the hue of their clothes! The first is a shepherd and his flock. There is a quiet corner of the table where I happen to know no models should be entering and little scenes like this add life to the table... and maybe if Barry and I get bored, the flock turns into roaming rough terrain!

The second set of stalwarts is the miller (of Penny Burn Mill) and his bully boys. Where do the big man's loyalties lie - with James or Billy? Again they might not amount to more than scenery or they could be up to no good and it may change from game to game as we are running the thing six times over the course of the convention. I suspect no two games will end up the same!

If I run out of things to do, I may add a few more characters to add to the confusion... 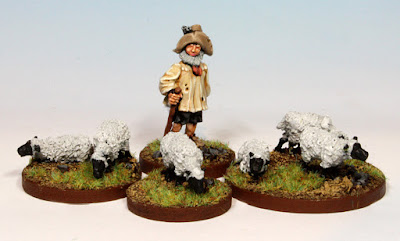 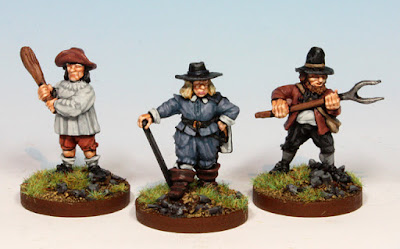 There are two camps on the Jacobite table edge. I have a pile of tents that would work fine on their own to delineate the camps, but that's a bit boring. It's much more interesting to strew a bit of detritus around as well. Like the civilians above, I'm not sure where all the crates were from, some are Tabletop World, but the wagon is from Warfare Miniatures. It's also no accident that the wagon is based exactly the same size that I need for the artillery park of one gun in Beneath the Lily Banners! The baggage might end up as tempting targets for the Williamite Horse, possibly even over the objections of their officers. 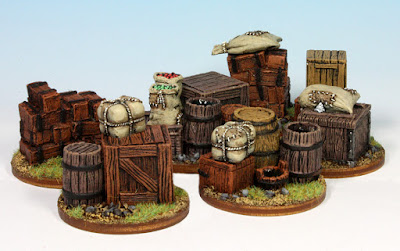 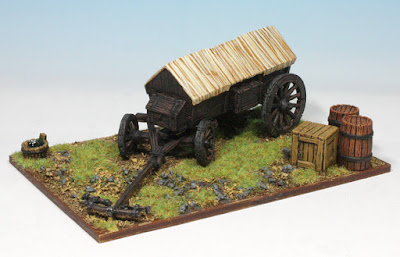 The next vignette is a pair of sappers, hard at work to fortify the Jacobite position. The models are from Dixon (which fit in great with the Warfare Miniature range, BTW, while we're waiting for Barry to commission some). These models have no use in the game for the convention (that I of know of yet) and are meant to be another part of the camp scenery. The base will make a great marker for engineers in future games of Beneath the Lily Banners. 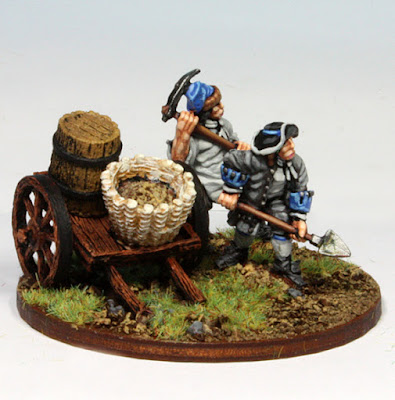 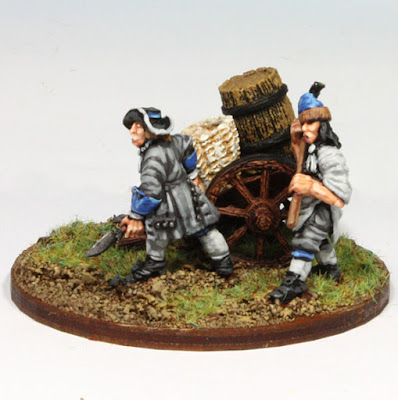 There's more, but we'll save some details for Historicon... Speaking of that, if you're planning on signing up for one of our games, the Thursday and Sunday slots are full, but there are still some spaces available on Friday and Saturday!