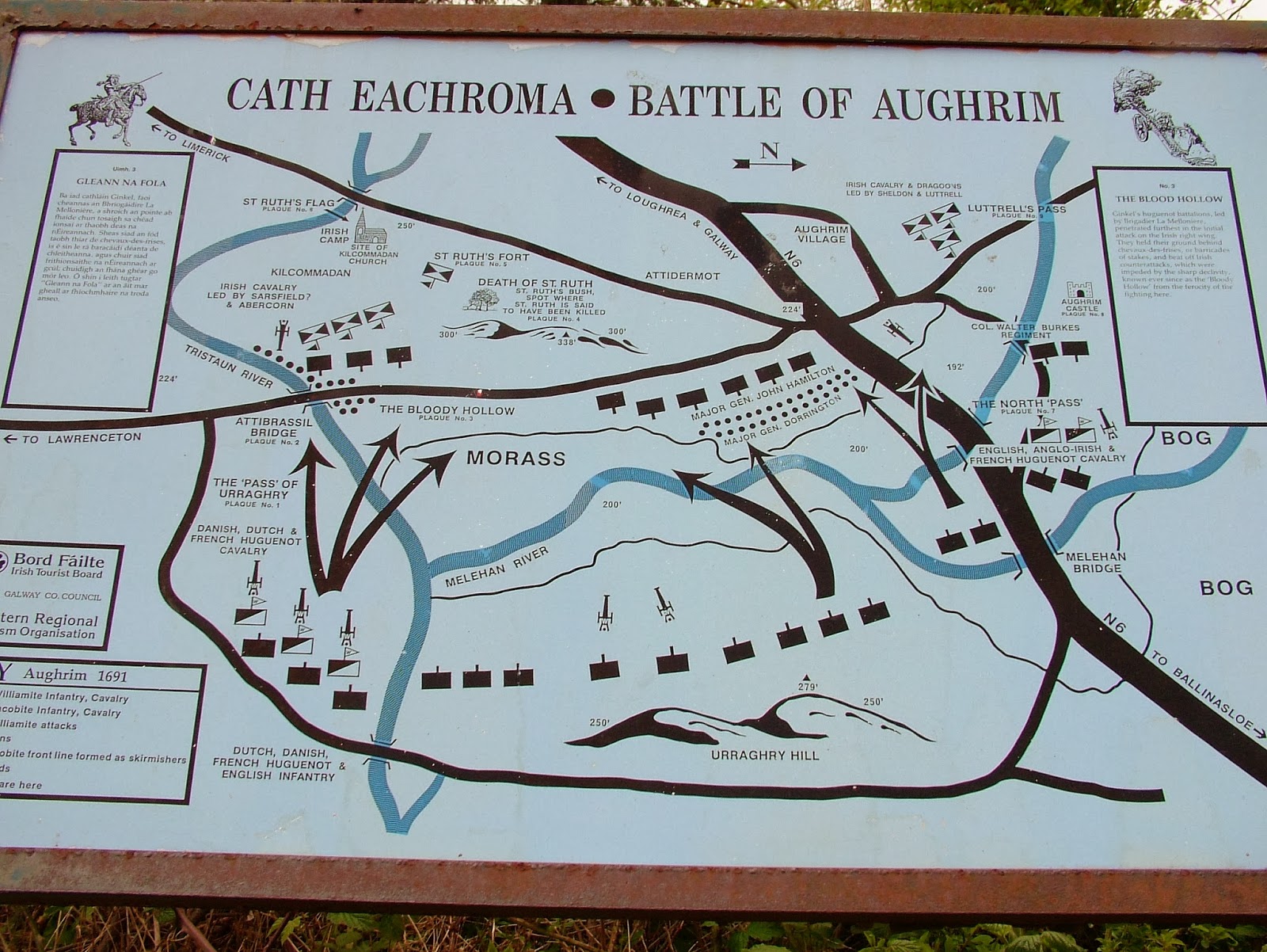 Have you heard of the Battle of Aughrim? Many people haven't and that includes wargamers. The words of a rather provocative (to some) song mention the battle and many people must have heard it  without being aware of the reference.


It is old but it is beautiful, and its colours they are fine
It was worn at Derry, Aughrim, Enniskillen and the Boyne.

One of our guest bloggers the author Michael McNally, has posted an interesting series on the battle here. The Battle of the Boyne is well known but often misunderstood in terms of its detail. The Battle of Aughrim was more fierce, larger and a much closer run thing with commensurately heavier casualties. It took place just over a year after the Boyne west of Athlone in Co Galway.


Many of the forces that took part had fought at the Boyne and gained a further year of experience campaigning in Ireland. The leadership of each army had passed from 'royal' control to that of lesser known generals (in historical profile terms at least but perhaps not at the time). A Frenchman was in command of Jacobite forces and a Dutchman in command of the Williamite army.


The Jacobites were now much more of a thoroughbred Irish entity. The French battalions present in 1690 had returned home. The Williamite force although still containing a strong foreign component in the form of Dutch, Huguenot and Danish regiments was to rely heavily on the performance of English regiments at Aughrim.

The engagement has many of the hallmarks of a classic set piece battle. One side in position on higher ground, flanks protected by difficult terrain and well deployed to take maximum advantage of its situation. Although fewer in numbers and with lighter and less artillery they had the advantage of excellent cavalry and a competent commander. They also knew that to lose in such a major engagement would hasten if not mark the end of the war in Ireland.


The Williamite commander Ginkel was also under the pressure of expectation. His master needed the 30,000+ troops tied up in Ireland to meet the enormous threat of Louis XIV's legions in Flanders. Failing to bring St Ruhe and his Irish army to battle and defeat him did Ginkel's reputation no good whatsoever with William.

With the fall of Athlone the stakes could not be higher for either side. This gives a context to our excitement at fighting Bloody Aughrim.