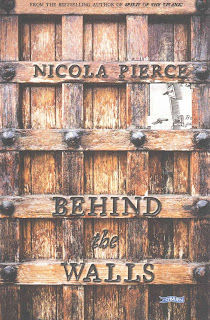 I don't normally do book reviews on the blog although I have occasionally written some for the trade press in the past.
I thought I'd make an exception for this book which I picked up in the Visitors Centre at The Boyne last month for a couple of reasons; It is about a subject in which I have a deep and abiding interest and not often written about in an accessible manner. Secondly, I wanted to see how a modern novelist would tell the tale, one which I have myself formulated and re-formulated in my head through continual revisiting.

I believe it is meant to be a children's book but at 350 pages and with some adult themes I thought it read pretty well for a more mature audience.

Overall as a piece of writing I enjoyed it. An easy read, set out well and managing to cram many incidents from the siege into a narrative which connects them, sometimes with a novelist's licence.

It is not necessary to issue a spoiler alert as the story is pretty well known. The Jacobites don't win at the end and Adam Murray does not die.

What I enjoyed most were descriptions of the conditions facing the besieged citizens of Derry, their physical state, the limitations lack of food would have placed on their ability to undertake tasks, mental condition and attitudes towards the laws of civilised society.

The book is written with the main protagonists being two of the Apprentice Boys - the Sherrard brothers. Pierce creates a family around them positioning their father as a doctor and well respected member of the community. The Sherrards are relatively well educated and comfortable. The family can broadly  be described as balanced, informed and considered but undoubtedly good Protestants.
Adam Murray also plays a major role in the book. He is painted almost as a Clint Eastwood like 'tall stranger', a reluctant hero, morally upright, uncomplicated and self deprecating. His altruistic persona is void of ambition, full of humility and self doubt and bearing no grudge to the unashamedly self promoters surrounding him such as the Reverend George Walker.

It is of course a novel and that offers the ultimate disclaimer for anything questionable either in terms of perspective or distortion of historical facts. The novel is not universally empathetic to the Derry folk but is strongly biased towards their belief system and position. Disappointingly it fails in every way to challenge the traditional Williamite interpretation of events or characters. The history is lazy and skimmed from widely circulated but often biased sources originating from immediately after the siege and in the period between 1700 and 1900. Anyone knowing nothing about the subject before reading the novel would conclude that the 'Papists' were pretty much in the wrong from the get go and that the reluctant and loyal citizens did what was right to triumph over barbarity and oppression in the face of overwhelming odds. Undoubtedly the human story of the hardship endured in the city drives any reader (including me) to really feel the pain and suffering of the besieged. I really connected with their experience.

The over simple characterisation of Murray, Walker and Lundy is a missed opportunity. Mitchelburne and Baker appear but not prominently. The relationship between the two Sherrard lads and a couple of their mates - plus the family dog a plot feature from the opening paragraph - which those familiar with the siege story will suss the reason for, manages to become the vehicle to explore the wider conflicts going on in the hearts and souls of the Derry population. This is nicely done and some of the tensions are well plotted and explored.

What I found enormously disappointing is the portrayal of the Jacobites as two dimensional cardboard cut outs. Their stance and point of view is void of context or back story. They are consistently cast as oafish, inept, cruel and often militarily incapable pantomime villains. The few characters explored in anything other than a 'movie extra' way are shallow and dull witted with the possible exception of Lieutenant General Richard Hamilton who is constantly mislabelled as Captain Hamilton. Their total lack of depth and absence of any redeeming qualities becomes a distraction after a while and mirrors the propaganda legacy of mindless droids mowed down in their hundreds by a handful of heroes who escape most epic battles with nothing worse than flesh wounds.

The military research is alas the very poorest component of all. The writer constantly refers to muskets as rifles. She often describes companies and detachments as regiments. Novice soldiers have the skill of snipers, captains are superior in authority to colonels. Officers change rank and then change back ie Generals become Captains and then Generals again. Kirke is described as Captain Kirke at one point! (maybe the sci-fi channel was on in the background).  In December 1688 the Redshanks are an army (sic) and the Jacobites outnumber the defenders constantly. They are referred to as well trained and professional. Adam Murray is a soldier and colonel from well before the siege and commands 1,500 men from the earliest point. The defenders never lose an action. Enniskillen is described as a city.  This may seem like pedantry but it does show that the writer is either totally uninterested in accuracy or did not do anything other than very rudimentary research. A very small amount of extra work could have made the finished article so much better.

Would a non gamer or military history enthusiast notice such potentially minor oversights? I am not sure but I found it distracting and after a while, irritating.

My recommendation for those interested in the siege and the war is buy it. It was a good read and kept me engaged till the end despite the criticisms mentioned above.