Book review - From Solebay to the Texel 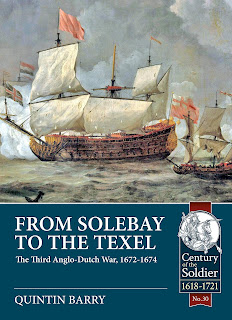 My thirst for knowledge about naval warfare in the period 1650 - 1720 has led to the acquisition of lots of collateral on the subject. I recently received a copy of the Helion Century of the Soldier book focusing on the Third Anglo Dutch War 1672-1674. This is closest to my core period of interest of the three 17th century Anglo Dutch Wars and features many of the main actors including William of Orange, James, Duke of York (Later James II) and of course Louis Quatorze.

The book by Quintin Barry is of the usual high standard from the Charles Singleton edited CotS series which continues its rapid expansion.  The two battle mentioned in the title are both large and famous.

A notable aspect of the period of 1650-1697 is the size and frequency of naval actions relative to land battles. Action at sea was frequent and on a grand scale. This provides excellent fodder for gamers or those interested in naval warfare in the Age of Sail generally.

The book itself gives a good overview of the war and is written in a direct and easy style. It is not a dry read.  Helion books from this series seem somehow more substantial than Osprey titles in page count whichcan mean more information. Solebay was a big battle involving nearly 160 ships from three fleets - French, English and Dutch. The Texel (pronounced Tessel) was of similar size. I wont spoil the ending for potential customers but these were full on battles not skirmishes involving small parts of each fleet. Often large fleet actions of the Dutch wars carried on for days. The battle accounts are lively and easy to follow with the challenges of command and control being the most remarkable features. The fleets which took part in these battles were much larger than Napoleonic fleets.


One thing I did notice about the book was the number of portrait style illustrations of personalities it contained. There are perhaps a few too many of these and their inclusion may be at the expense of battle shots or commissioned artwork. I personally would have benefitted from a few diagrams showing fleet movement during the battles. These actions were large and confused affairs and deployment of  fleet course traces could have eased understanding for those like me stimulated by visual cues. The text is undoubtedly helpful and for those who know the coastlines of both eastern England and the Spanish Netherlands and can tell their WSW from their ESE, the descriptions should provide enough information to minimize or eliminate directional confusion.


The fleet listings at the rear of the book are useful particularly for those like myself interested in gaming the battles in whole or in part.

I commend this book to anyone interested in the period as grand fleet actions beyond the Nelson era do exist, are dramatic and involve many a tale of derring-do. The ships are to my own mind far more handsome that Napoleonic era vessels  and the battle paintings give a dramatic impression of the scale, destruction and confusion of a 17th century battle at sea.
Share Share on Facebook Tweet Tweet on Twitter Pin it Pin on Pinterest
Back to The League of Augsburg