These models can be used as privateers and general ship crew for every nation in the West Indies throughout the 17th and 18th centuries. There will be a few anachronisms of dress across this broad range - tricorns in 1635 and ECW era trousers in 1750 - but the general appearance will serve, at least for me. 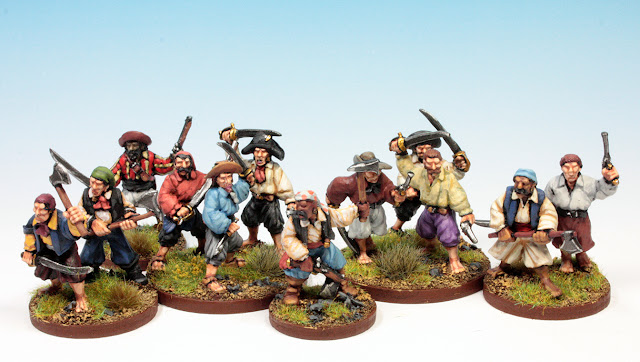 Right away, I knew I wanted to be able to use the collection for Donnybrook and Beneath the Lily Banners - The War of Three Kings and that meant finding a basing method that would work for either game. One option would be sabot bases, to group six singly mounted bases, but I've never likes the look of those. My foot dragoons for BLB have been simply left as skirmishers and I crowd them together to represent a standard formation. 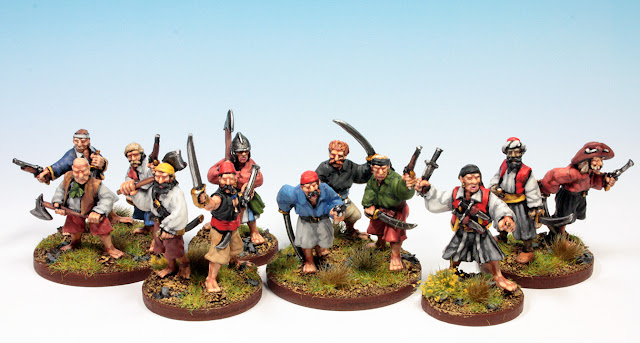 In A Taste of Victory, Barry classifies ship crews as 'Tribal Infantry' and suggests using the rules for Highlanders from BLB:W3K to represent them. To me, that suggested not only different fighting abilities, but a different look on the table top. 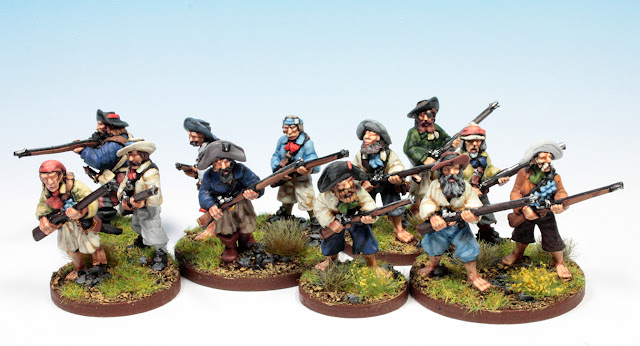 I decided to go with a multiple basing system, inspired by Dalauppror years ago, that I've used for several other projects. This system combines the ease of movement and look of small vignettes with the flexibility of singly based models. They will also fit on my ships when it's time for Donnybrook at Sea! These bases can be clustered tightly together (they are spread out a bit for the photographs to try and show off the individual models) and only end up slightly wider than my regimental troops, which would not be unexpected for rabble! 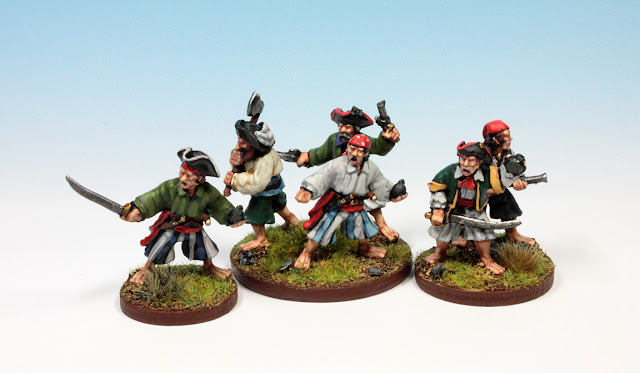 I'll be adding more of these fellows in the future (I have at least another two units of 12 and there are characters on the way), but this is what I need for my current goal. These were fun to paint, but also took me longer than usual - the variety being both a blessing and a curse in these regards. With so many other models in the queue, I'm moving on to other things for the collection, but I'm really hoping to focus on this theater for some time.
I was torn on the basing for these... they will look a little strange on the deck of a ship. Mounting them on wooden planks would have required removing the integral base and they would have looked equally as strange on land.
Oh, this also gives me my first historical Donnybrook force for the period (quiet, Hilton)!