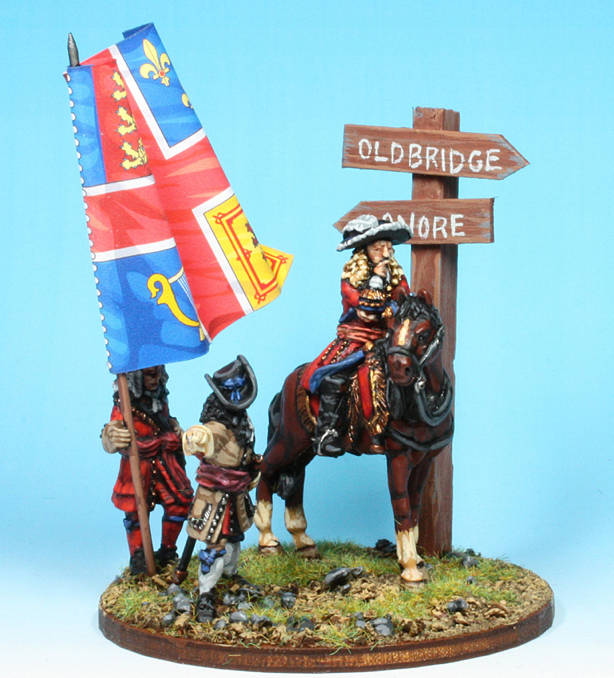 Clarence Harrison - Here is the initial goal for my Jacobite infantry. I also want to point out that this wasn't originally done for the blog - this is actually the process I use to get organized for a new project. By making a plan it is easier to see what models and paint you need and devise a realistic timeline.
For instance, I know from experience that I CAN paint and base one BLB battalion per week without too much stress (that doesn't always mean I WILL). Seven battalions could be seven weeks or let's call it two months. That lets me look ahead to know when I'm going to want the cavalry on hand... Nothing diverts my attention sooner than wanting to paint and not having the models (hmmm.... while I'm waiting for my LoA horse, maybe I'll paint a few Vikings/Napoleonics/WW2/Space Marines... then I'm out of 1690 for the rest of the year).
Irish Foot Guards (2 battalions)
Red coat, blue facings, red vest, red trousers, red stockings, gold buttons and lace
Rear pike stands (total 4 stands each), models at rest
I plan to use the Warfare French infantry models for this unit. There is absolutely no evidence that they were clothed any better than the rest of the army, but as the king's guard I want them to stand out a bit so I'm employing wargamer's license - they are my toys after all!
Earl of Clanrickarde
Grey coats, red or grey facings, grey trousers, white or red stockings, silver buttons, mixed hats and a few civilian coats in brown, officers in red coats
Central pike stand (total 3 stands), models shooting, apostles
According to troop returns in October 1689, Clanrickarde had a high ratio of pike to musket compared to other units in the army so I am going to model this unit with the pike stand in the middle of the unit. I also want this unit to have a bit of a ragged appearance so I'm going to mix in a few civilian coats and other variation of equipment.
Earl of Antrim
White coat, red facings, white vest, grey trousers, grey stockings, silver buttons and hat lace, officers in red coats
All musket (total 3 stands), models advancing
I rarely use pure white on wargame models, but I want Antrim's to stand out from de Boisseleau's below (they have the same cuff color) so I will make an exception. I also decided to paint the trousers and stockings darker to provide more contrast for the coat.
Marquis de Boisseleau (2 battalions)
Light grey coat (gris-mesle), red facings, white vest, white trousers, white stockings, gold buttons and hat lace
Rear pike stands (total 4 stands each), models marching
French supplies for the Jacobite army in 1690 eventually saw most units clothes in gris-mesle, a cloth flecked with blue threads that varied in color from white to pale grey. The default color of turn backs in the French army was red unless the colonel of the regiment paid to replace them. The Battle of the Boyne falls in the middle of the transition. Lord Boisseleau's regiment was at the docks when the supplies arrived (they helped unload them) and he outfitted his troops straight away.
Irish Militia
Civilian dress - grey, red, or brown coats
All pikes (total 3 stands), models at rest, mounted officer on central stand
Some accounts of the battle cite six battalions of Jacobite foot and some seven. However the books that mention seven battalions don't name them all. The discrepancy could simply be wrong or perhaps the seventh battalion was unremarkable in action or dress. I decided to paint a militia unit of all pikes inspired by one of Barry's units: 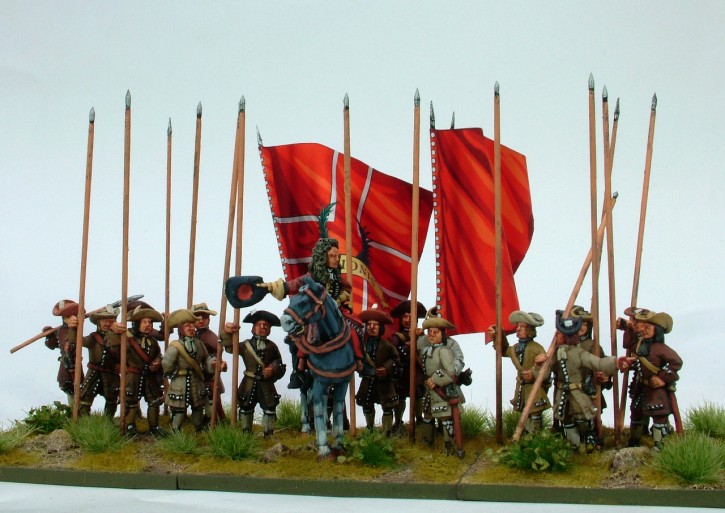