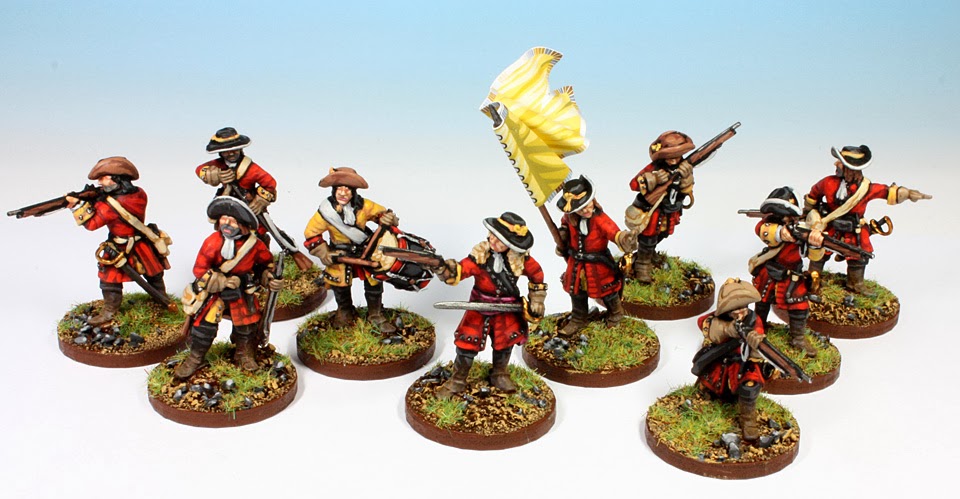 I intend to paint a mounted version and horse holder stand when they become available from Warfare (or barring that I'll convert some cavalry when the time comes). I based these models individually so I can use them for Donnybrook as well. Dismounted dragoons in Beneath the Lily Banners are traditionally deployed as close order infantry with two stands. We've posted rules for small units of single based miniatures between 3-9 strong (yes my unit is ten models, deal with it) before. They will represent a forlorn hope, an advanced guard, a detachment, or in my case, dismounted dragoons. The rules are not set in stone, but briefly these detachments are counted as separate units requiring orders. They shoot as either 1 or 2 stands depending on actual numbers and get the bonus for All Musket. They take morale tests as would other units requiring support/isolation modifiers to be applied. Standard BLB battalions do not check morale if the smaller detachments are routed. If I want to field them as standard close order infantry for BLB I will simply rank them up in a tight formation. I might actually base my mounted Dragoons individually as well for Donnybrook and set them up with movement trays.
The coats were painted with one of my favorite triads - Vallejo Red (70926), Flat Red (70957), and final highlights of Scarlet (817).
Share Share on Facebook Tweet Tweet on Twitter Pin it Pin on Pinterest
Back to The League of Augsburg