by Clarence Harrison August 01, 2015
Clarence Harrison - It's been a long time since I've been able to participate here (or in wargaming in general). I'm not ready yet to commit to regular posts, but I did manage to finish this unit today (I started it around January 2015)... 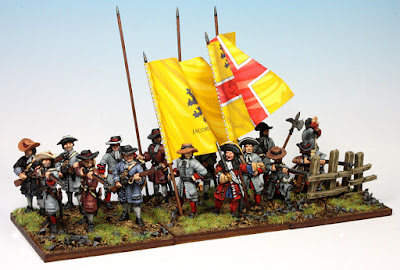 As I mentioned when I put forth my earlier plan for the army, Clanrickarde's foot seem to have nearly a third of their number armed with pikes. That ratio goes beyond the typical arrangement for a BLB unit which uses a rear pike stand as a marker to indicate the unit has some pikes available so I decided to model the central stand as pikemen. On the table, Clanrickarde will suffer a penalty to shooting, but gain a bonus to close combat.
At the Battle of the Boyne, Clanrickarde's regiment was deployed in the village of Oldbridge. They weathered the storm of Williamite artillery before being attacked by three battalions of the Dutch Blue Guard! They were reinforced by the Irish Foot Guards but were forced to fall back after a stubborn defensive effort.
I wanted this unit, and most of my Jacobite army for that matter, to be less uniform than my Williamites. However, I also don't want them to look like rabble. I managed to create a unified look by painting the majority of the unit in grey coats and varying the cuffs between red and grey - the effect is subtle, but the distinction is there. Several models were painted in civilian coats, but hopefully the end result still resembles a campaign dress regular unit more than a militia.