by Clarence Harrison November 30, 2015
Clarence Harrison - Yeah, remember this series (Type 'Building a Wargames Army' in the search bar above)? Hopefully updates will be a little more frequent, but as the WiP posts have shown I made progress on my Jacobite army. I actually painted twelve models in two days thanks to a long holiday weekend. It took me two months to paint the first six! 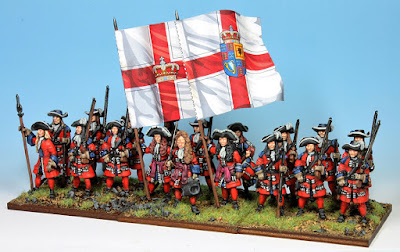 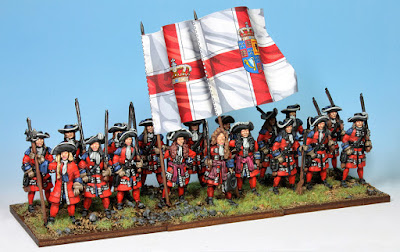 As I mentioned a while back, I used the Warfare Miniatures French guard infantry models for this unit. There is absolutely no evidence that they were clothed any better than the rest of the army, but as the king's guard I want them to stand out a bit so I employed wargamer's license to field them in fancy coats - they are my toys after all!

I plan to add pikes to this unit, but I am also going to paint up the second battalion and I want to start on them while I'm on a roll. Then I'll paint up the pike stands for both units in one go.

I am very pleased with how this unit turned out. I was a bit unhappy with some of the models while I was painting because I felt like I was doing a sloppy job. However, after muster and basing I am hard pressed to find the offenders... maybe they deserted in shame (or likely wound up in the second rank)!