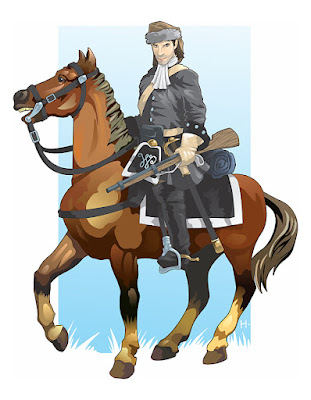 Clarence Harrison - I've been wanting to do this unit ever since I got into the period - somewhere around 2006. I actually purchased the models from Wargames Foundry, but other projects took precedence (we began working on Republic to Empire) and the models sat in a box (they're still there as far as I know).

In 2010, my real love for the period was solidified when Barry and I met at Historicon for the first time and put on the Battle of the Boyne as one of our games. No, Eppinger's Dragoons weren't present at the part of the battle we portrayed, but the game launched my desire to build armies for Beneath the Lily Banners. Our meeting also revealed the first fledgling steps (I got to see the samples of the first run of castings) of a new company - Warfare Miniatures.

My full investment in the period was delayed until Warfare Miniatures was up and running. Since I was starting out fresh, I wanted to use primarily the models we would be promoting. This meant I would be limited in my choices for a while. However, I needed tons of infantry and there were plenty of those in the first wave! I set out on the journey, content to wait for Eppinger's squadrons to become available in the future.

Now, there are only so many sculpts you can commission at once and ranges have a way of growing organically. One thing leads to another and soon you are buried under new models! The gaps in the range are always closing. It's only a matter of time before Warfare Miniatures has models for every practical troop type in the theater.

But I've been waiting for these mounted, fur-capped gentlemen forever, despite my whining (Argh! Fur-capped Austrians? Why do we hate the French?). Warfare Miniatures does have a set of splendid Mounted French Dragoons in caps, so the other day I decided to stop being lazy and make my own. I'm not an accomplished sculptor, but have enough confidence in my skill to add a fur texture to the existing bases of the caps. Each became successively easier once I'd gotten the hang of it. All it took was adding a tiny sausage of putty (no, that's too much... nope still too much... even less than that) around the cap, shaping it with my only actual sculpting tool, and then working in the texture with an X-acto blade. In about an hour, I was able to tart up twelve troopers. Huzzah! 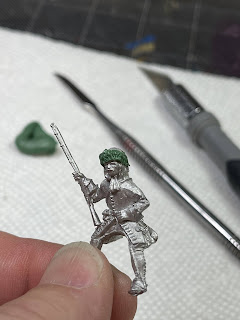 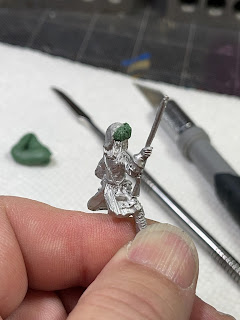 Only twelve? Well, yes... I'm mixing in a few models in hats. The officers likely wore hats and I've seen several other representations of this regiment (including Barry's) drop in a few among the rank and file. I think it adds the look of a hard as nails regiment on campaign. 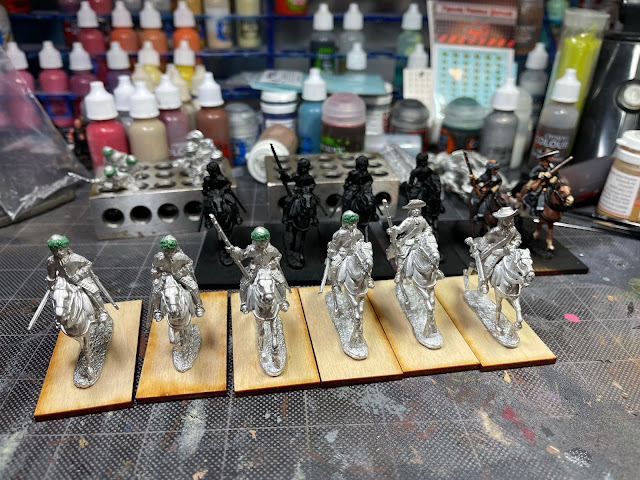 I've used the "regular" Warfare Miniatures horses rather than the ones that come with the dragoon castings. My initial units of dragoons were assembled before we had the ponies. I didn't want my elite troopers looking into the navels of their counterparts on the other side! Here's a few WiP, ready for action! 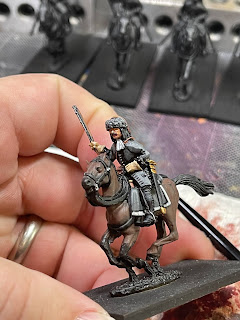 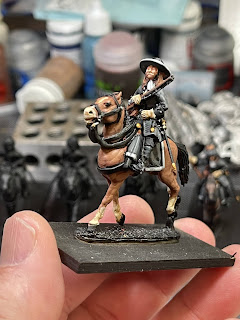 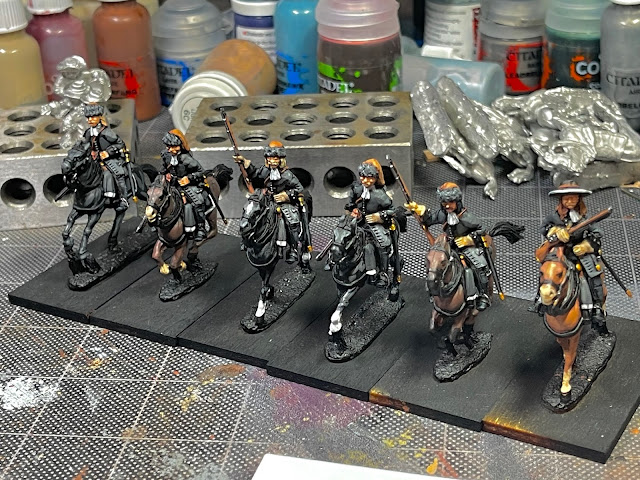 I have no doubt Warfare Miniatures will announce the release of mounted French Dragoons next week, but I'm really proud of how this regiment is progressing. It's cool to have a unit that's unique in the world! Even Barry doesn't have this unit (yet) in hunky Warfare Miniatures glory!