Peter's Admiral Tocht is at sea once more in his second campaign adventure........

War has been declared between the United Provinces and France. Spies have warned of a well-equipped squadron putting to sea from Duinkirk and Tocht’s reformed command has been charged with preventing it gaining open waters and persuading it back to port.

With a light north-easterly behind him, Admiral Tocht sailed for the coast to intercept Amiral Rochefoucauld’s squadron before a westward course brought it level with the significant sand bar named carapace de tortue (turtle’s back).


Sailing almost directly into the wind, the larger French ships made slow progress whilst the Aquilon and Téméraire moved more nimbly in an effort to cross the bows of the lead Dutch ship Eendraght, 66 guns.


Under Captain van Nes, she opened the account on Turn 4 by scoring hits on Aquilonbut, the advanced position soon brought Eendraght within range of other enemy ships.


Turns 5 to 7
Slow progress was made by the capital units of both sides and by Turn 6 Eendraght which had altered course and was heading back east, found herself sailing directly into the broadside of the powerful Souverainof 80 guns, carry the flag of Rochefoucauld. Her position and the cumulative damage, caused van Nes to quickly strike to the passing Sans Pareil. First blood to the French.


Turns 8-9
Tocht fired his burner Wapen van Breda which headed straight into Téméraire. To that point, the French has taken extreme steps to avoid such a risk. The blazing fire ship was skillfully repulsed by Téméraireand for the next hour or so, she drifted with the gentle wind toward the coast and beyond the battle.

Jansz, aboard Delft, was caught out by the treacherous tortue shoals and his 76-gun ship drove hard onto the heavy mud and stuck fast point southward and lying over to starboard with her port side guns skyward. Despite frantic efforts, her crew were unable to re-float her for more than an hour as the battle unfolded all around.

No sooner had Delft ran aground than Téméraire did exactly the same, lying at right angles to the Dutch ship and pointing north-west. At a distance of less than 100 yards, neither was able to offer any significant fire and Captain Jansz had to satisfy himself with intermittent rounds from his bow chasers landing near or on the French frigate.


Turn 10
The lumbering bulk of Ridderschap van Holland moved cautiously past the stern of the grounded Delft but at a distance far enough to ensure she did not suffer similarly. Clearing her sister ship, Ridderschapripped Téméraire with a close-range and brutal broadside which devastated her main gundeck and damaged both masts and rigging. Efforts intensified to re float the frigate which was finally towed off by her boats in the nick of time.


Turns 11 -13
As Tocht did to Téméraire, the French did to Delft. By Turn 12, she had sustained numerous hits and was in some danger of being abandoned had the punishment not abated. Tocht was reduced to a single operative unit against three powerful and mobile enemy vessels. Drastic action was demanded.


A couple of hundred yards off the shoals, Ridderschap rasped along the flank of Souverain and Tocht’s own crew scrambled aboard the French flagship without a preliminary exchange of gunnery. In a viciously fought combat the Dutch sailors were pushed back onto their own vessel followed by the vengeful French. The fighting was fiercest around Tocht himself. He was wounded but shielded by his men. As the French gained the upper hand, Tocht fell wounded once more but rising from the slippery deck his own men were so enraged that they counterattacked, driving the French back aboard Souverain.This so stunned Rochefoucauld’s men that they threw down their arms and the enormous yet unexpected prize, was Tocht’s.


Amiral Rochefoucauld surrendered his sword and his ship which hoisted the Triple Prins at the stern! Although sustaining considerable damage and casualties, each remained seaworthy. Leaving a prize crew and soldiers to guard the prisoners, Souverain immediately sailed for Rotterdam whilst Tocht threw his own ship back into action.


Turn 14
Emboldened and inspired by the nearby sight of their admiral’s seizure of such a mighty trophy, Delft’s crew finally heaved their heavy ship off the mud getting a couple of fathoms beneath her keel. As Delft manoeuvred to re-join the fray, Ridderschap’s starboard guns thundered and Aquilonsustained damage to her stern and steering gear jamming the rudder dead ahead. Badly mauled, she was forced to follow her current trajectory heading straight for the mouth of Dunkerque harbour. At this point it was clear to the commander of the undamaged Sans Pareil that withdrawal was the wisest course to chart. Deftly securing tow lines to the captured and drifting Eendraght,she struck out for home followed slowly by the damaged Téméraire. More stunned than the enemy at this bizarre turn of events Tocht did not pursue deeming his mission and his luck at an end. 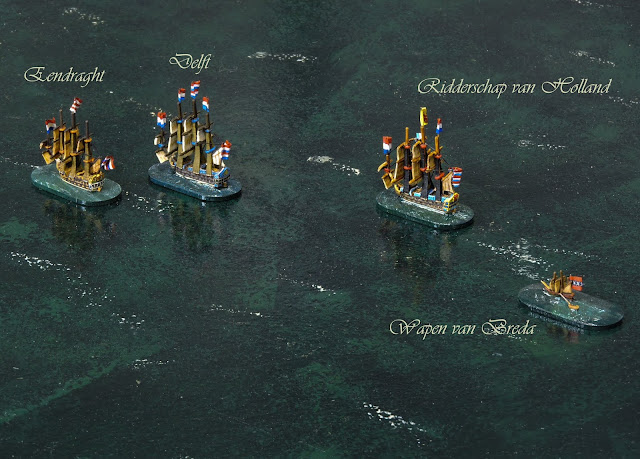 It seemed an almost impossible victory. Tocht, outmanoeuvred and outfought, had triumphed with a prize of magnificent value in good enough condition to be recommissioned relatively quickly. King Louis’s battered ships were sent homeward have sailed no more than 15 miles and the Dutch maintained control of the approaches to La Manche. Tocht’s reputation, tarnished at Plymouth at the westernmost end of The Sleeve had been restored and more, at the easternmost.

Thanks to Dave for playing the stunned Rochefoucauld and to lucky Colin as the somewhat incredulous Tocht... you owe him a large Dutch gin Peter!