by augsburgeroberst May 01, 2020
I have been a bit remiss at not posting this campaign report sooner, but, it was a cracker and worth waiting for... Brilliant game, well played by both Dave and Colin.

Mouth of the Volta River, Slave Coast.  August 22nd, 1664
The mission to extinguish Arab slaving activities operating from abandoned Portuguese facilities on the delta of the Volta river in Western Africa was fraught with challenges from the outset.
De Ruyter was charged by his Admiralty with two unenviable objectives. The reduction by gunfire of an extremely strong fort built fifty years previously by the Portuguese and, the destruction by burning, of the bustling slaving town Adafoah, sited on a headland opposite the fort and across the wide mouth of the Volta. His private thoughts no doubt ran to wondering which idiot had conceived such a hare-brained scheme.

The fort lay behind an enormous silt bar across the mouth of the river the approach to which could only be achieved via a narrow and dangerous channel. Access to Adafoah would be by riding crashing breakers onto a sandy strand which ran from the river mouth west, in a long curve toward the ramshackle town.


De Ruyter knew that to fire the town whilst suppressing the hostile denizens would require upwards of one hundred and fifty men, well-armed and with the necessary combustibles. Landing longboats on the beach would be challenging and losses even before landing were highly probable therefore, additional resource had to be included in the landing force to guarantee success and make good losses. This would inevitably leave his battleships short of crews to repulse boarding attacks so beloved of the slaver pirates.


Castel da Rainha was another proposition entirely. It went against the grain for an admiral such as de Ruyter to drop anchor in dangerous shoals to engage a large and well-appointed fortress with the purpose of reduction by gunfire. The amount of powder, shot, time and weather-luck necessary for such a task was unquantifiable if the garrison possessed backbone. The possibility of damage to his own ships was significant. Sailing inshore to gain accuracy and impact would necessitate negotiating an extremely narrow and hazardous tidal channel which even the shallow-draught Dutch built ships would find problematic. 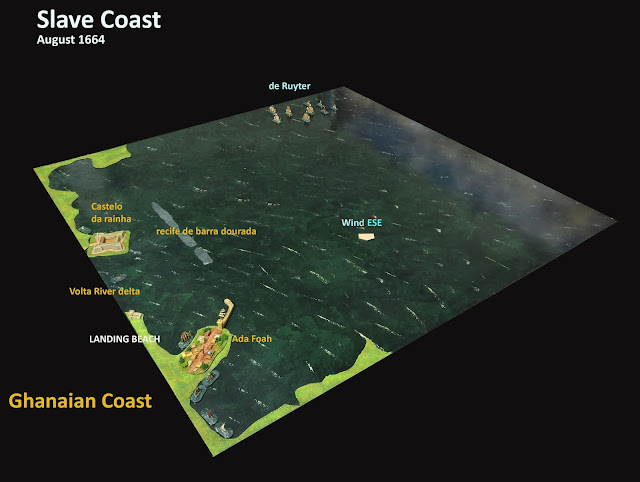 So, it came to pass that on August 22nd, 1664 with much trepidation, de Ruyter divided his squadron into two groups. The first, consisting five ships of the line; Spiegel70, Klein Hollandia 56, Provincie van Utrecht 56, Geloof50 and Noorderkwartier 50, would sail inshore and anchor on the seaward side of the fortress. Their combined firepower would, over a sustained period reduce the fortress or, drive out the garrison.

Whilst this ambitious endeavour was underway, the second group consisting of the small hoeker vessels Groene Kameel, Reijger and Oliphant, would sail into the anchorage and at 200 yards out, each release their two towed longboats containing thirty heavily armed men apiece to burn Adafoah. These small ships were manned by Cape colonist volunteers serving with the African fleet and the shore parties were drawn from the crews of de Ruyter’s five warships. Accompanying the flotilla of landing ships was a small burner, the Drommedaris. Its purpose was to destroy one of the large slavers at anchor in Adafoah harbour.


Turns 1 – 5
The Dutch riding an onshore wind wasted no time in moving towards their targets and the barrage on Castel da Rainha commenced on Turn 5 with encouraging results. The fortress had already opened fire on the incoming Dutch squadron at extreme range, perhaps to deter any attack before it started. Noorderkwartier scored early hits but as the smoke accumulated and the fort retaliated, three significant impediments became obvious to de Ruyter.

Most of his ships had anchored cautiously far away from the silt bar and so, were firing at extreme range. This, combined with the relatively small calibre of the Dutch ordnance made scant impact on the massive ramparts. Thirdly, the orientation of the fort relative to the silt barrier denied all the warships a proper line of sight to the target. Progress was much slower than anticipated and conditions at sea reduced the projected rate of fire significantly.

The small ships wasted no time in lining up to drop their cargoes on the beach but no sooner had they began their approach drawing close to the mole of Adafoah harbour, when a group of dhows emerged from various points and converged on the leading Dutch ships. These small boats without guns, were crammed with Arab warriors bent on boarding and killing the Dutchmen. Two armed xebecs joined the defence and a confusing battle of little ships commenced. 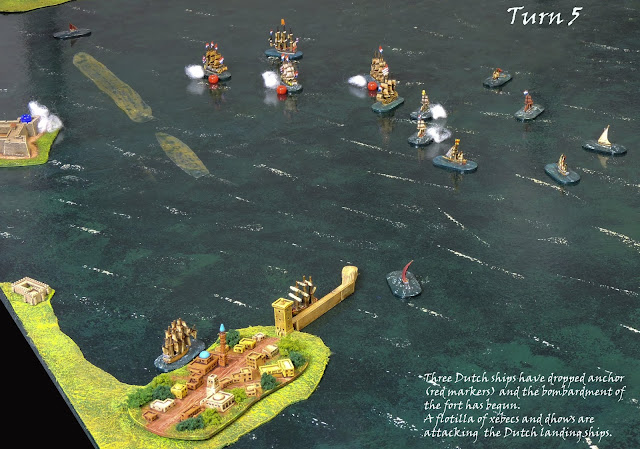 Turn 6- 8
The lead Dutch ship Reijgerdelivered lucky but productive fire against a sleek xebec Aljana which promptly exploded in the centre of the channel and disappeared. Notwithstanding, Reijger was attacked by other boats as was Groene Kameel and Oliphant.


All too soon two Dutch ships were captured, their crews killed or thrown over the side and their longboats holed and sunk. Only Groene Kameel which had fought hard with the crew of the large dhow Afriqiaan was able to disengage and head back toward the anchored warships. Her shore parties had been all but wiped out in the fight and the ship was barely seaworthy as it retreated.

In a matter of forty minutes almost all de Ruyter’s invasion force was destroyed and its transports sunk or captured. Only the burner remained and picked its way gingerly through the carnage dodging marauding dhows and gunfire to slip under the mole and into the harbour.

Turn 9
The slavers demonstrated great courage as several small dhows prosecuted attacks on the large anchored warships bombarding the fortress. A small dhow Mawah, succeeded in grappling and boarding Geloof before finally being overpowered and sunk. The Muhit which had captured and then deliberately sunk Oliphant, later boarded the much larger Provincie van Utrecht before its men were overwhelmed and wiped out.

Turn 10-12
As this bloody hand to hand and ship on ship duelling played out, sails were spotted approaching from the west and hugging the coast. Five Berber ocean-going warships hove into view and de Ruyter knew he now had an extremely serious situation on his hands. Lack of progress in reducing the fort provoked the reckless bravery for which the legendary admiral was rightly famous.


Astonishing not only the enemy but his own fleet, Spiegel weighed anchor and sailed directly for the great silt bar under the very muzzles of the fort. Two boat loads of soldiers had been retained as a reserve aboard the flagship. In a demonstration of sublime seamanship, Spiegel rode over the silt bar with her keel scraping a trail in the mud and reached the clear water off the breaker beach. Even the Berbers applauded!


Dropping anchor as far inshore as possible, two boats were lowered each containing thirty men. As these prepared to ride the massive white topped breakers crashing onto the shore, cannon fire erupted from a previously unseen low walled adobe fort just behind the beach. A lucky shot smashed into one of the boats which capsized in the rolling waves. De Ruyter from his inshore position could see that the arrival of the Arab war fleet meant his own flagship was now potentially hemmed into the harbour. Agonizingly, he gave the order to abandon his remaining longboat to its fate as he frantically tried to fight his way out to sea.

As this drama played out the stealthy progress of Drommedaris had gained the perfect position to run against an anchored slaver. Her captain ordered her fired and she promptly exploded in the centre of the harbour. The eruption was so violent that three proximate dhows, recently victorious against the landing force, were blown to pieces. Flaming wreckage even landed on Spiegel several hundred yards inshore.

Turns 13-16
All the Dutch captains had spotted the peril of their admiral. Every warship weighed anchor and made sail for the harbour mouth to hold back the fast approaching enemy and clear a path for Spiegel to escape. Two war galleys newly arrived, lined up an attack to board de Ruyter’s ship. The admiral met the attack and at the head of his men he captured the Barbry. In doing so he sustained a bloody sword cut to his chest. Noorderkwartier had arrived and she boarded and captured another galley, Tajir. Gunfire from Geloof and Provincie van Utrechtaccounted for two more xebecs Eisafa and Eabd. The former crashed into the mole’s outer wall and was then sunk by gunfire at 20 yards from Spiegelas she finally cleared the harbour. The latter was completely dismasted and drifted into the tangled wreckage in the anchorage. This flurry of intense destruction left a single Berber vessel operational. The large European built galleon Firewan was strong enough to deter a concerted effort to overcome her yet not able to match the numerous Dutch vessels. She stood off and de Ruyter extricated his five warships from the smoking, wreck filled anchorage of Adafoah.

Despite the capture of two galleys and the destruction of four dhows and four xebecs, the attack on Adafoah was a failure. De Ruyter lost three small ships, all his pinnaces, nearly 180 seasoned sailors and soldiers and a further 55 men aboard the warships. Castel da Rainha was not significantly reduced and Adafoah continued to trade freely in its human cargo and ivory.
De Ruyter’s squadron, almost out of powder and shot, short of water, undermanned and somewhat demoralized, set course southward to replenish at the nearest VOC station and make all the necessary provision and repair to stay operational.