In my continuing Covid-induced privateer laboratory I decided to blood some ships I had painted a few months back just because I had them. A few packs of Chinese pirate junks which I had intended to use specifically to run out against European vessels exploiting the riches of the South China Sea.


By now you know the form - equal points value forces made up of different numbers of vessels per side in an island style setting.

This time  the variation is a little more extreme than usual. The Dutch vessel represents a VOC (Dutch East India Company) ship of 56 guns. Captain Rijsbergen's Hollandsche Tuin has a Veteran crew, a master gunner, marines and a hull strength of 16 points. She is equipped with light guns.

This is the biggest vessel with the most guns which has run out against the pirates so far. She will be manouevrable but her hitting power beyond short range is lower than the previous heavy-gunned Portuguese, Dutch, English and French 46-48 gun ships deployed. She cost 360 points.


Against her is a numerous but below-par Chinese force under the pirate Hēisè yănjīng (Black-eye). His fleet is in two flotillas which are approaching a VOC trading station in the South China Sea. The objective is simple - disable the large Dutch ship and then sail into the station and pillage it.


His own squadron has three ships:

The wind was set from a direction which had both Chinese squadrons close-hauling from turn 1. The Dutch ship had a d3 throw to see how many turns it took to ready for sea from its position at the quayside. The score was 1 and so, Hollandsche Tuin activated on turn 2. The permanent initiative +1 went to Hēisè yănjīng.

Going was slow for the Chinese because of the wind and by the time they reached the area of the station, the Dutchman was already at sea and sailing amongst them. The action opened on turn 3  with Rijsbergen landing shot upon Hăitún. The light guns reloaded quickly and on turn 4 the VOC ship landed a catastrophic hit on the little fire junk Lú totally dismasting her. She drifted with the wind for the rest of the battle occasionally obscuring fire arcs as she moved slowly through the water. 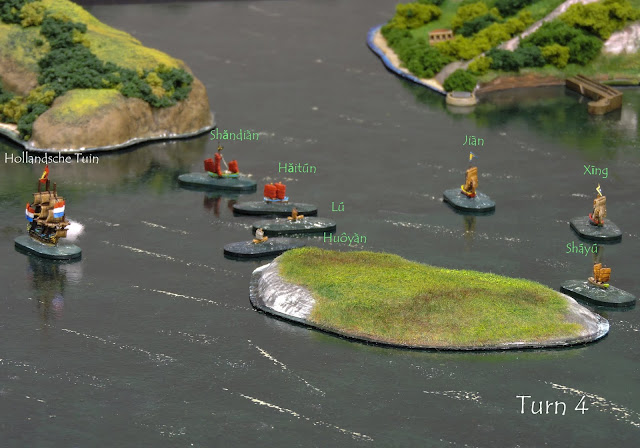 The under-gunned junks were unable to do much damage despite finding their mark during turns 5 and 6. An attempt to board by Hăitún was easily brushed off. Treachery was suspected as Warlord Po's  flagship disengaged during turn 6 sailing off from the battle having neither fired nor attacked. His squadron failed its check which caused the withdrawal. 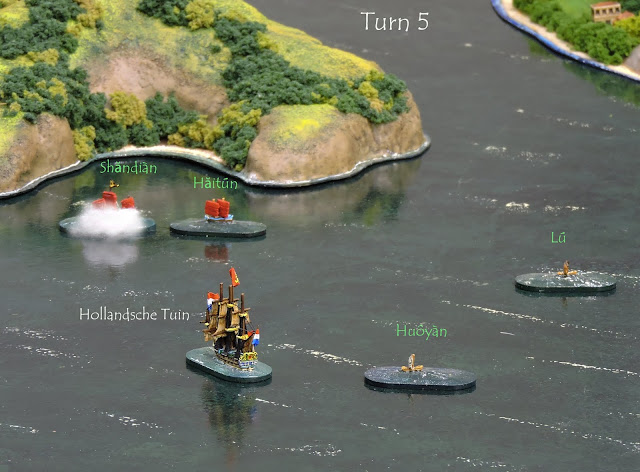 Sháyú took a broadside on which riddled her with shot. In a desperate attempt to stay in the fight she tried to board the massive Dutch ship on turn 9 and was quickly overwhelmed. The pirates had now lost two ships and another had fled.


The remaining fireship Huôyàn was able to grapple Hollandsche Tuin and still aflame and attached, was towed as the Dutch ship continued to move, fire and load until the crew cut her loose and she began to sink and drift away from the battle.


During an earlier phase of the battle as the ships converged in the narrow channel Xīng  had run aground on a small island remaining stranded there as the fight moved further away. Having begun with six more ships, Hēisè yănjīng now found his flagship Jiàn the only vessel able to offer any credible opposition. His crew's gunnery was inept and despite sporadic hits on the Dutchmen the battle was proving a shambles.


By turn 10 Xīng had re-floated and when during turn 13 Jiàn became caught in irons, the plucky Xīng attempted to board Rijsbergen's ship. The Dutch crew quickly rebuffed the attack and swarmed onto the junk capturing her within minutes.


Hēisè yănjīng  found his flagship alone and at the mercy of the mighty enemy. Still manouevring and firing, the junk was unable to find a way to reduce the Dutch ship and inevitably took a broadside which shattered her rudder. Sailing in circles and receiving repeated hits she collided with the half submerged and abandoned Xīng  thus sustaining further damage. Rijsbergen  glided by at close range to delivery the coup de grace but the smug Dutch gunners missed with every shot compelling a rapid  coming about and second attempt. The final effort brought the pirate to heel and Hēisè yănjīng  surrendered having lost six of his seven ships. Hollandsche Tuin  lost 135 points whilst the Chinese lost 295.