I always enjoyed the Churchill quotes describing General Neil Ritchie of the 8th Army as an 'embarrassment of Ritchies'. Helion is creating an embarrassment of riches with their relentless release of source material for the 17th century, much of it plumb in the centre of my interest crosshairs.Two recent releases New Worlds, Old Wars, The Anglo-American Indian Wars 1607-1678 by David Childs and The Armies and Wars of the Sun King 1643-1715 Volume 5: Buccanneers and Soldiers in the Americas by  Rene Chartrand are important additions to resources which many of us will welcome. 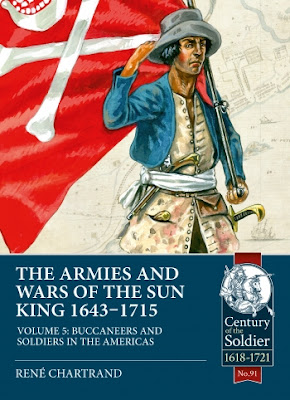 Both deal with non European dimensions to the wars of major European powers and concentrating on North America and the Caribbean. Each provides a wealth of information and enough wargaming fodder to keep scenario writers like myself in copy for years.

Childs's book has a narrower scope than that of Chartrand, focusing on the northeastern colonies and the landownership disputes, alliances and betrayals, raids, counter raids and massacres which characterized the English ascendency in 'New England'. The wargaming possibilities lie mostly in skirmish gaming and for those who love that genre, the opportunities for drama and surprise outcomes from the earliest days of the century until the latter part of Charles II's reign are legion. The book is well written and highly readable although I would have preferred a few originL colour plates and less reliance on Victorian/Edwardian era illustrations. Overall, a great addition to the canon of work now aiding the 17th century wargaming community towards its goal of never-ending tabletop possibilities.

I have had the privelige of sharing an expert panel platform with Monsieur Chartrand at Historicon some years ago. He continues to feed the hungry mouths of the gaming community with scholarly work focusing on the Kingdom of France and its military efforts both in Europe and its overseas dominions. This book is a monster, absolutely jammed full of detail for land, naval and amphibious gaming possibilities. The colour plates are in the warm and gentle style of Patrice Courcelle and together with a further extensive collection of colour illustrations towards the rear of the book, offer a rich visual enabler to the text. At 300 pages, this book is literally and metaphorically heavyweight and offers a refreshingly non Anglo-centric perspective on the campaigns fought in the Caribbean during the stated period. It does not ignore the all important naval elements and the focus on buccaneers is most welcome.

Books are not cheap these days but my perspective is this -no one thinks twice about buying a few pints of beer in a week or if you are addicted to the weed, a couple of packets of those. These books will last a lot longer, are much better for your health and will inspire you rather than make you cough or want to wee a lot!