Lots in this post for those interested in more involved ship to ship combats and small actions involving boarding and character play.....


The three iterations of the three on one ship scenario produced thought provoking results. The single privateer vessel won all encounters although the final run against the Martinique based French was a very close run affair.

Comments from friends and blog followers pointed out that the victories were perhaps a result of  feeding in piecemeal, the three vessels, allowing the tooled up 48 gun privateer to gain advantage over each in detail.

Taking this on board, I endeavoured to move the science to the next stage by changing the scenario set up and reversing the roles. I chose a Portuguese 52 gun ship the Raina Santa Isabel and equipped her with a flag officer, a master mariner, a master gunner and a chirurgeon as well as heavy guns and marines.


Against her I set a pirate squadron under the infamous Italian privateer Giacomo Spada captaining the 42 gun Fortuna. Accompanying Spada are two smaller ships - a partially lateen-rigged xebec style ship of 18 guns - Perla, which is classed as Swift and made more formidable with an average strength hull as opposed to a weak one. The third vessel was a smaller craft about the size of a caravel with a square rig - Contrabandierre of 8 guns. All carried privateer boarding crews and all were classed as Drilled.
The Portuguese man o'war cost 336 points and the privateer squadron 335.


The setting of the game was off the coast of northern Brazil in the 1670s. The first version played in very difficult waters enclosed by various islands which restricted manoeuvre and proved to be critical to the outcome. The second iteration was run in open water offshore from an island chain which produced an equally dramatic but different result.


The common factor in each victory was a well-timed stern raking broadside the catastrophic damage of which informed both outcomes.
In  the first run, the Portuguese had the permanent +1 initiative advantage. Sailing into the island-circled arena from different directions, the ships quickly closed and the little Contrabandierre fired a passing broadside but missed completely on Turn 3.


On Turn 4 the Marques de Tavora in command of the Portuguese man o'war, used the 'fire as your guns bear' option which it was hoped would pretty much finish the caravel at musket range, heavy guns offering rethrows on half the misses. Notwithstanding a 4+ to hit, Rainha Santa Isabel achieved only a single hit and now had at least two turns before reload could be completed. The decisive moment of the game came in turn 5.


Attempting to find open water and a chance to reload, the powerful Portuguese ship presented her stern to Fortuna which raked her from several hundred yards distance but was able to score three hits compelling a catastrophic damage check.  Disastrously this was a hit on her steering gear jamming her rudder to port. Effectively, she would now sail in circles within the enclose arena and if unable to reload or present her guns, she was helpless. On Turn 6 Contrabandierre ran aground and remained so until turn 11.


Meanwhile, things went from bad to worse for Tavora. His jammed rudder forced Rainha Santa Isabel directly into the wind where she remained in irons for the rest of the battle - a further seven turns. Helpless, with guns loaded, she sat caught between the wind and her jammed rudder as both
Fortuna and Perla sailed across her stern at musket range raking her repeatedly.


By turn 13 she was so badly damaged that Tavora ordered the nearby Perla grappled but this too failed. She finally struck on turn 13 having been shot to pieces in the same position for the equivalent of two hours.


Full of characters, equipped with marines and heavy guns, this formidable ship was torn to shreds having been disabled three hours prior by an effective range stern rake.
Four victories in sequence for the privateers but luck or lack of it, played its part.


In the second run I opened the table up to provide some sailing room. With both sides broad reaching, no shooting took place as each tried to manoeuvre for advantage. Spada's privateers had the permanent +1 in this game and continually forced the enemy to move first giving three uninterrupted moves to his own vessels.


With more than half the width of the table covered before the first shot erupted, it came on turn 4 when Fortuna, to windward and closing off the starboard bow of the Portuguese, landed a single hit. She quickly reloaded and from much close range failed to score any hits.


The two largest ships were now very close with Rainha Santa Isabel running off the port quarter of Fortuna. At this point Perla cut right across Tavora's stern but her raking broadside was badly delivered and did no damage.

On Turn 6 Tavora got his ship into the perfect position at musket range. With his first broadside of the battle being a musket-range, stern-rake with three additional raking dice, expectation of something spectacular was justified. Eight hits, guaranteed by the heavy gun re-throws rocked Fortuna. Her catastrophic damaged checked jammed her rudder dead ahead.


A desperate boarding attempt by Perla on turn 7 failed to ward off Tavora's Rainha lining up her own boarding run on Fortuna from the privateer's larboard quarter. The grapple was successful on turn 8 which compelled the proximate Perla to also grapple Tavora's much larger ship.


This created a three ship boarding combat with the Portuguese ship sandwiched between the badly damaged Fortuna which she was boarding, whilst trying to ward off a boarding action by the fresh but smaller Perla.

The combat was not as one sided as it may at first seem. It took five separate combat resolutions for Tavora's men to finally subdue both privateers. Fortuna was pummelled into submission whilst a lightning result against Perla on turn 9 saw her strike.


Witnessing the bloodbath and unable to turn into the wind to add herself to the combat, Contrabandierre beat a hasty retreat after failing her squadron check at the end of turn 9. During this intense combat the Portuguese captain was slightly wounded twice and his chirurgeon likewise. The leader/character risks in combat if you have a lot of them are significant.

The first victory against the privateers in five games was achieved by a single ship which had been torn to pieces by a shoal of carnivores in the previous action. Well done to the Marques de Tavora and his gallant crew! 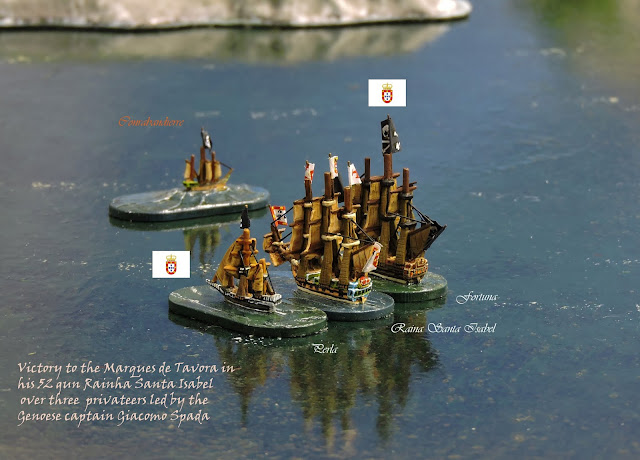 This bucked two trends - a stream of privateer victories and also the notion that a single ship in open waters could not overcome three enemy ships.