Crossing the Shannon - The Guns of August 2018 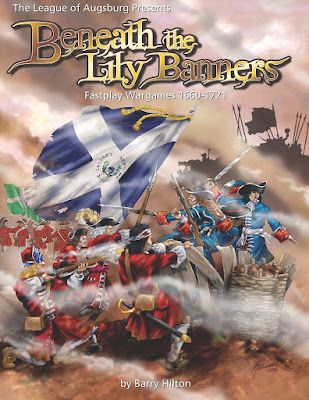 Clarence Harrison - My work schedule has been crazy recently and I realized I was never going to be able to finish the Limerick project I had planned for The Guns of August (maybe Historicon 2019). Rather than give up on the idea of attending, I set out to find a different scenario to run.

While sorting through scenarios, I stumbled on the map for 'Crossing the Shannon'. This game appeared in the first book Barry and I did together - the original version of Beneath the Lily Banners! I already had all of the terrain I needed for this game and that will make sorting out the rest by August dead easy.

Hmmm... I was also surprised to find out I had almost all of the models I needed too. When Barry and I were designing the book and decided to include a scenario, I remember advising we make it a small one. Mr. Hilton's idea of a small game was 25 units... over 200 infantry, 72 cavalry, and 9 commanders... bloody hell. What surprised me was that I had MORE than that now. There are only a couple of things I need to paint and I could get away without most of them by tweaking a few things, but since I now have the LUXURY of time I do want to add them.

Total Force: Commander in Chief, two brigadiers of Horse with 6 squadrons of Horse and 2 of mounted dragoons, three brigadiers of Foot with eight battalions (16 units total).

I just need paint a pike stand for Mitchelburne’s Foot and another brigadier! You can never have too many of those anyway...

For this force I need to paint a pike stand for the Irish Foot Guard and at a couple of wagons or carts. I also need to build two ferries or rafts. I may also need some more civilian models or other single models milling around the river.

So, these are subject to change, but I this will be close give or take a battalion or squadron. I'll do a full scenario presentation AFTER the show in case some of you reading this will be playing. Of course, if you have a copy of BLB1 you can always look it up, but I've altered bits to make it fit my needs.
Share Share on Facebook Tweet Tweet on Twitter Pin it Pin on Pinterest
Back to The League of Augsburg