While the Russians or Swedes are the obvious choice, the Danish army has always been a favorite of mine. My usual process when starting a new project is to pick a specific battle and then choose a brigade on which to focus my collection. Units beyond the core brigade will be chosen from those that fought nearby. While I usually have no plans to recreate a specific battle on the table top, this method allows me to point to an historical precedence for my little army.

Elements of the Danish army fought all over Europe, so I was spoiled for choices. In the end I picked the Battle of Helsingborg. Against the backdrop of the Great Northern War, King Frederick declared war on Sweden and launched an invasion to retake their lost province of Scania (in Swedish hands since 1658). The Danes raised an invasion force of 15,000 infantry supported by 4,000 cavalrymen and 30 cannon. In early November 1709, they landed in the province (southern Sweden) and were initially met with little resistance. The Swedes were hastily raising an army to replace their devastating losses at the Battle of Poltava the year before and it took three months for them to assemble a force capable of confronting the invaders. There is an extensive series of articles on the Battle of Helsingborg on our blog already, so I won't rehash that here beyond mentioning that is was a loss for my chosen faction.

The armies of both sides are well documented at Tacitus.nu and I supplemented this with more detailed information on the Danes from an article by Torstein Snorranson (translated by Dan Schorr), Danish Uniforms 1699-1712. The Danish army underwent a lot of changes, even in this short span of time. As usual with this period, sources sometimes offer conflicting information. Any mistakes in the historical accuracy of my wee soldiers is purely mine.

My initial goal is for a small army - four or five battalions of Foot, an equal number of Horse and dragoons, and a couple of guns. For my model force, I've chosen units from General Major Sichstedt’s Brigade, the central anchor of the first Danish line:

The megalomaniac in me really wants to do these units in the 'Grand Manner' - 40 figures each - but in the interest of actually getting a force on the table, I'll stick to the conventions of Beneath the Lily Banners for now and plan on units of 18 figures based on three stands. These are much more practical for my usual 4x6' game table anyway, but I'm making careful notes on the paints used so I may one day revisit this fantasy.

It's ironic that my first foray into the tricorn period was a unit... err... not wearing tricorns. The Grenadier Corps was formed in 1701, drawn from the grenadier companies of the established Danish regiments. 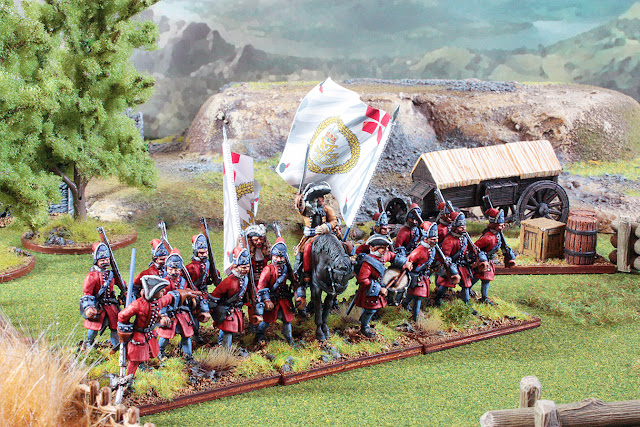 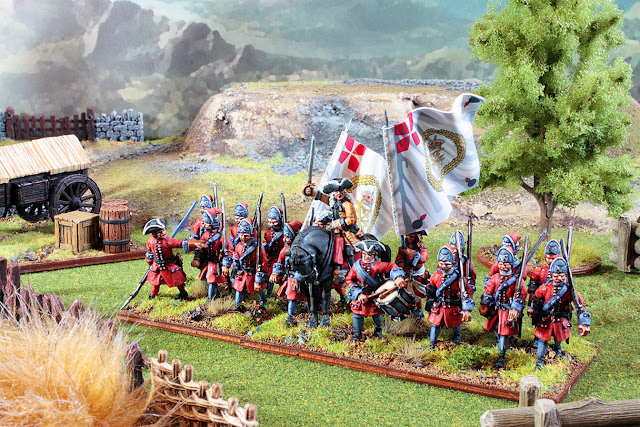 This battalion depicts the unit as it may have looked in 1710 on the foggy coast of Sweden. Some sources list these lads as having silver (white) trim on their cuffs and crossbelt, but I've chosen to leave this detail off (I've also seen the crossbelt in buff, white, and yellow). I think freehanding the F4 monogram on all of their caps was enough frippery for one unit.

Right! So that's a start. I think Dronningen's is up next. I may consider fielding the Garden til Fods in their floppy hats and simply swap out the flags on my existing unit for this project (it is a myth that all units suddenly had tricorns after 1699, but I'll explore that more in another post if I decide to go that route).
Share Share on Facebook Tweet Tweet on Twitter Pin it Pin on Pinterest
Back to The League of Augsburg