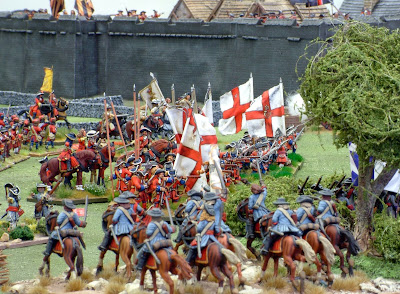 Barry Hilton - Ireland is familiar territory for our weekends. This scenario was a bit different from our previous efforts. We wanted to dress the table using Adrian's fine city walls so the game was built around the relief of a siege. 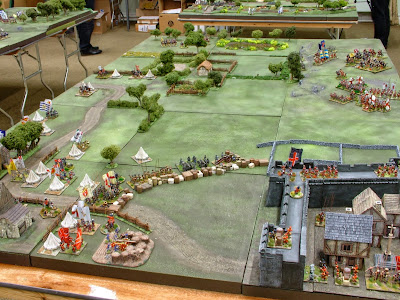 Athlone was the chosen location to be invested by General Ginkel's army. After some weeks a relieving force emerges from the dawn mist from the south west led by the charismatic Patrick Sarsfield. The scene is set for a surprise attack type scenario with a numerically superior army caught unprepared by a smaller motivated, high quality enemy. 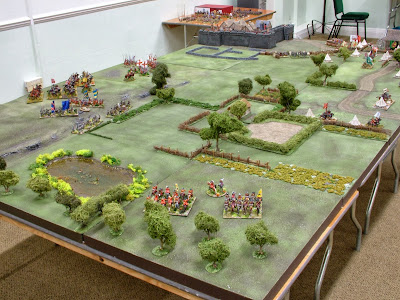 The Jacobite force is smaller but has the advantage of surprise. Most of Ginkel's force is asleep in  regimental camps as the game begins. Only two battalions stand at arms in the siege lines and much of Ginkel's cavalry is camped 5 miles away to the east. 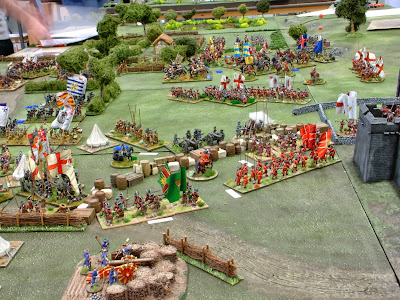 The objective for the Jacobites is to sweep through the siege lines and relieve the beleaguered defenders of Athlone. The Williamites must form up and defend their position  thus repulsing the relief effort. The added dimension comes via the garrison of the city itself. If the Jacobite effort was perceived(by the umpire) as being successful enough, the garrison would sally forth and pile more pressure on the Williamites!

Activation of the encamped Williamites was done by throwing 2 x D6 from the start of T2. Scores of 9+ then 8+ then 7+ etc were required to assemble the sleeping regiments as turns progressed. 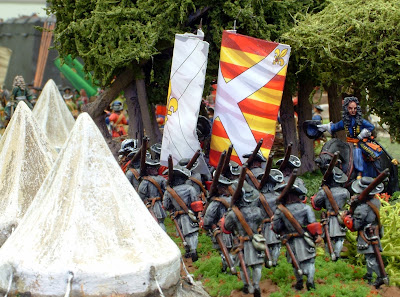 This check was done per regiment per turn. An assembled regiment took a full turn to form up beside its camp and facing in any direction. The camp for each unit was marked by placing tents at various points on the Williamite table side. 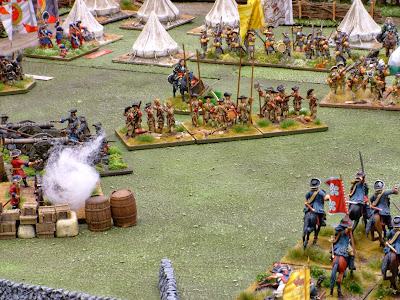 The Williamite orbat consisted of 11 battalions in 4 brigades  (3,3,3 & 2 battalions each). They had 6 squadrons encamped at Athlone and a further 5 which would appear from a variable entry point after T6. The Jacobites has 8 battalions in 2 brigades plus 9 squadrons. Four battalions in the garrison were under umpire control. 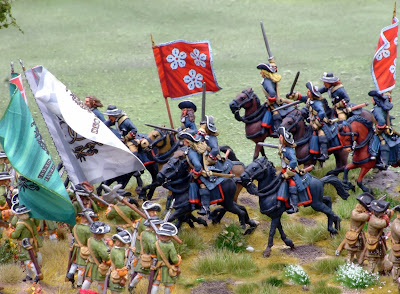 The four runs of this game were very tight. The Jacobites lifted the siege once when they pushed through a collapsing Williamite line in its centre. The final run saw the Jacobites held in check but with enough strength to disengage in good order. The other two runs were to the Williamites who held and repulsed the attack without critical damage to their enemy. 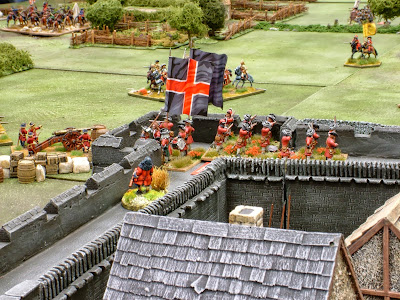 Although in game 2 the city garrison fired frequently from the walls, no sally was forthcoming. This game was very photogenic particularly beneath the walls of Athlone and when a Jacobite cavalry flanking manoeuvre came in behind the Williamite camp from the south. I am not sure who got the Jacobite victory it may have been Marcel Hurst and Jim Masson or possibly a solo effort by Paul Patrick. 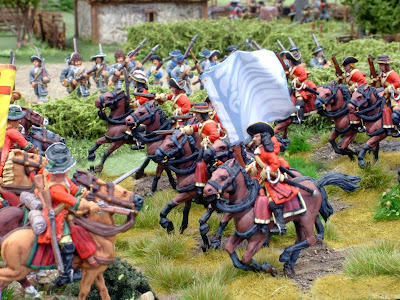