Barry Hilton - This game was a scaled down version of the battle of Klissow, July 8, 1702. I dug my Swedes out of retirement for this one and literally has to give them a clean with a very fine sable brush to remove a layer of dust accumulated over years in box files and lying around my garage.

I misplaced three regiments (misplaced is an inaccuracy, I actually sold them to Günter and forgot that I did so!). Having spent a fruitless 2 hours looking for them before I remembered  I no longer owned them. This gap meant I needed to do a bit of quick painting to get the Swedes back to some kind of strength. Regiments Halsinge and Uppland were the output of a week's painting pre-Derby.

The Klissow table was 10 x 6 and fairly plain and dominated by a marshy area running across 8 feet of frontage between the two armies. We used a neat rule to create unpredictable movement for anyone moving into this area; Each unit threw a D6 every turn  they were in the  terrain. On an even number score they were unaffected by the ground. On an odd number score they then threw a DAv. The resultant number of inches was subtracted from their movement in that turn. That made the Swedish advance very difficult to coordinate and unpredictable. Another variable was the effect of Günter's massive quantities of chevaux de frise. 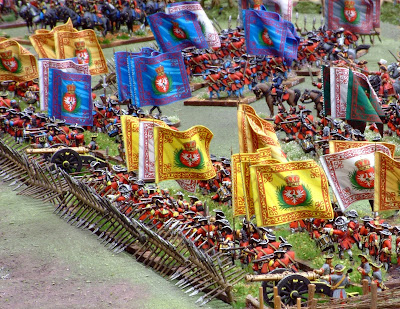 Günter jokingly (I think) brought out about 10 miles of the stuff and insisted that no Saxon infantry unit would deploy without it. He then 'encouraged' me to create a rule to accommodate the work of his sculptor! Liking a challenge, I did just that on Friday night as I counted sheep.

Here is the rule: When a Swedish unit charged a Saxon unit the defender throws a D6. On an odd number score the chevaux were ineffectually placed and provided no significant impediment to the Swedes. On an even score the Saxons then threw a further D3. The resultant score was the number of additional combat dice they were allowed EACH turn of close combat. This worked very well being uncertain and variable if the defences were good. 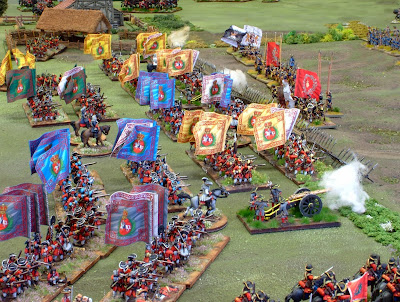 The Saxon Army was composed of 16 infantry battalions, 25 squadrons of cuirassiers and 3 field guns. The Saxon infantry were in 4 brigades each of 2 regiments of 2 battalions. The first battalions were all classed as Drilled and the second all Raw. The Cuirassiers were half Drilled, half Raw with the exception of the 4 squadron Gardes du Corps graded as Elite. In the last run of the game we upgraded all of the remaining Saxon cuirassiers to Drilled with the exception of one regiment (Again after some lobbying by Günter!). All of the front line Saxon battalions were covered by chevaux and were allowed to adopt DEFEND orders. King August the Strong was randomly either a Plodder or Competent. 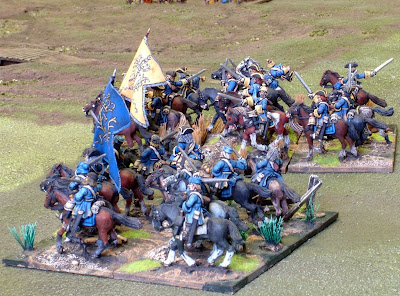 The Swedes had 6 battalions. 3 were Guard and the remainder Elite. They had 12squadrons, all Elite with the exception of the Drabants who were Guard. Three light guns completed the orbat. King Karl XII was either Skilful or Gifted on a random die throw in each run of the scenario.

We played the game four times. The Swedes were dubbed machines, cyborgs (not bjornborgs!), zombies and other descriptive terms indicating their almost unstoppable nature. Despite horrendous losses they made it to the Saxon line in every game and broke into the line three times from four. 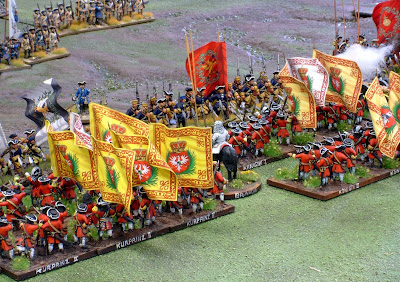 Their best performance came in game 2 under Bill Robertson. Bill broke the front line in two places and caused the partial collapse of the second line. Despite this, Gerry and Les ultimately achieved an impressive Saxon victory. Don't feel sorry for Bill! He attacked and attacked and then, attacked again. By the end of the game he was commanding one solitary squadron of Ducker's Regiment and two infantry battalions with over 60% casualties apiece, oh... and Karl was still in there but that was it! 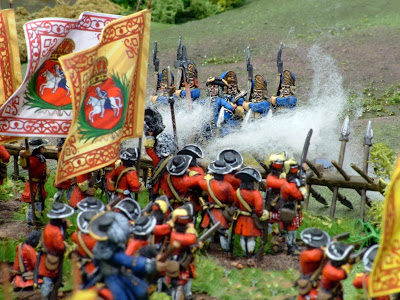 He simply ran out of steam as there were no Swedes left to fight. Bill looked well satisfied as he had shattered several regiments of Saxon cuirassiers and worn the enormous GDC down to two rump squadrons.

Alan made some heavy weather of the Swedish attack in game 3 and the result was judged a losing draw. He got bogged down in the centre and his Horse were checked by wave after wave of Saxon Horse which had moved well out into the flanks. Games 1 and 4 saw Günter in charge of his beloved Saxons. Game one was judged a winning draw as was game 4. 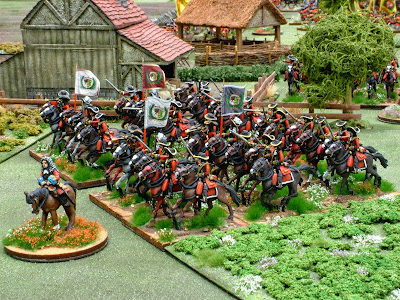 King August managed to fight many rounds of close combat during the four battles surviving them all. He led his GDC is a five round melee which saw him flit from one shattered squadron to the next as Ducker's regiment scythed through each fresh wave of red coated Horse on the Saxon right. 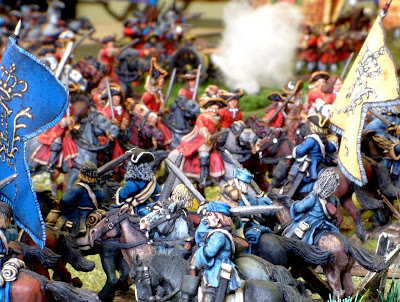 An interesting syndrome developed throughout the weekend which saw each successive commander of the Saxons find Günter (wherever he was in the room or at lunch) and report to him on the performance of his army. He told me he 'felt like the King!' by the end of the two days!

Overall the Saxons performed extremely well albeit fighting from a strong defensive position. The Swedes were admired as unstoppable, awesome, frightening, quick, flexible, hard hitting and devastating (with most combats starting with them on +10 or +12 combat dice versus the +3 to +8 of the Saxons) but.. they did not win once and were shattered in every game. 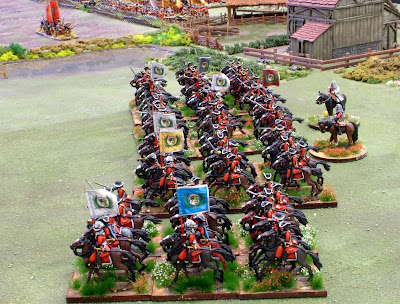 We found the most effective way of dealing with the Swedes was not the All or Nothing charge but rather; sending the Saxon Horse in squadron by squadron. This slowed and disordered the Swedes  in addition to wearing them down by attrition.