King Christian V of Denmark appeared to be a lot of things. Headstrong, avaricious, possibly not very bright. When he embarked his mercenary army for Ireland in early November 1689, he chose not to assemble the men and animals in Sjaelland or at Copenhagen where it would be easy to onboard everything, but rather at a site in Jutland called Hjerpsted. This marshy salt-flat area caused no end of delay and the men could not access the lighters and barges to take then out to the transports. At the time of embarkation, the sea had 2cm of ice upon it along the shoreline.

After many delays, the Danish armada finally put to sea and ran straight into bad weather which scattered the fleet. Most of it managed to re assemble and arrive upon the east coast of England within a few days but many ships were not so lucky.

Enter, the next challenge. The French naval guerre de course (war of the chase) was in full swing. Captains like d'Amblimont. Forbin, Varenne, Croisic and of course the big daddy - Jean Bart, were running riot in the waters around Europe and beyond. Bart had actually been captured off Guernsey by the Royal Navy in May of 1689 but, managed to escape from gaol in Plymouth. steal a boat and row for 52 hours across La Manche to get back to France! Now there is a scenario I need to finish!

The unlucky dazed and damaged Danes were about to be scooped up in yet another daring French privateering sortie. Several stray transports were attacked in the open sea between the British coast and Denmark. Two ships containing men from the Queen's (Dronningens) and Oldenburgske regiments were captured.

The story does not end there. Some of these men were pressed into service as the French regiment Royale Danois. Yet another ship load thought.. 'sod this for a game of soldiers', recaptured their ship from the privateers and sailed for land. They were shipwrecked on the European coast and spent the next year on an epic trek to rejoin their regiments in Ireland. For 17th century soldiers that does count as dedication.

My interest in the Danish contingent is shared by Clarence. We've written a fair bit about them in uniform guides and scenarios like; 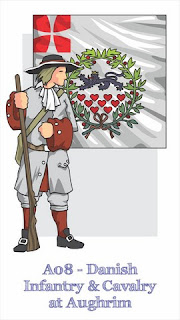 This expands the story of the Danes of '89 a little further as the Mad for War scenario - All at Sea, featured in pack #33 Noordelijke Seeen deals with the capture (or not) of the infantry in question.

There are a further two Donnybrook scenarios written but as yet unreleased handling the fighting from a skirmish perspective. 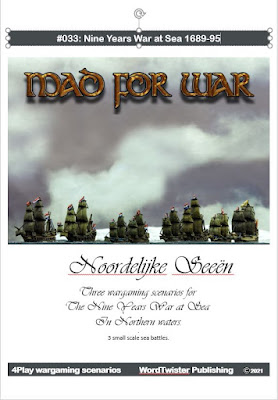 The Danes are excellent Nine Years War fodder and their exploits make for outstanding wargaming.