Did you hear the one about four Dutch Heokers? December 1689.


William III and his army landed at Carrickfergus, Ulster in August 1689 and the international struggle for Ireland began. His army was ill-served by its officers and during the terrible winter camp at Dundalk thousands of men died from disease. The situation was disastrous and dangerous. Lack of proper supplies, poor sanitation, inadequate food and damp shelter resulted in dozens of preventable deaths every day. Something had to be done to alleviate the army's wasting away.
The French Navy made passage to Ireland challenging and so convoy routes had to be kept secret. In the dead of winter a small yet important mission comprising four small Dutch heokers has navigated Cape Wrath and is weaving through the inner Hebrides to come into Dundalk harbour from the north. The ships are heavy laden and armed but without an escort. They have been told a man o'war will pick them up off Eilean Dub Mor (The Big Black Island) north west of Jura and guide them the last 60 miles. The winter is already severe and driving snow is falling even at sea.
The rendezvous point is south of a narrow and dangerous channel which has fierce currents and  difficult to navigate if entering from the south. The escort which is the Dutch 4th Rate Vlissingen has spent the whole morning cruising back and forth beyond the channel waiting for sight of its charges but they have not appeared around the eastern headland.
French and Jacobite privateers are known to cruise this far north and so the Vlissingen's presence is necessary. An unflagged, heavy-built warship known as Cúchulainn has been preying on merchantmen in the Irish Sea and  Western Isles. It is usually accompanied by a fast cromster called Wolfhound. The normal tactic is for the larger vessel to bombard and disable the merchantmen whilst the Wolfhound, crammed with a boarding party then grapples the immobile ships and overcomes the crew. Nobody knows who leads the privateers or where they are based and today in the snowy, treacherous waters around Eilean Dub Mor they have appeared on the western horizon headed for King William's convoy.

The convoy must past through the dangerous channel between Eilean Dub Mor and the smaller island. The ships must exit on the far table edge and make their way to Dundalk. On board three are general cargo. The fourth has the pay chest for the entire army for the past sixth months. The ship with the money is unknown and is only revealed at the end of the scenario by being drawn from four folded pieces of paper.

To win, the Privateer commander must capture at least two of the merchantmen. The Wolfhound only ever shoots with one die regardless of range. Her specialty is boarding immobilized ships and capturing them. Cuchulainn should attempt to disable the merchantmen by gunfire allowing the yacht to come alongside. The Dutch win if more than two ships make the home run. Vlissingen must not sail towards the channel until at least one convoy ship becomes visible around the headland of the eastern island. The game has 20 turns.
A check was made to see if either commander was better than the other and both rolled the same so no modifier was added to initiative rolls each turn. 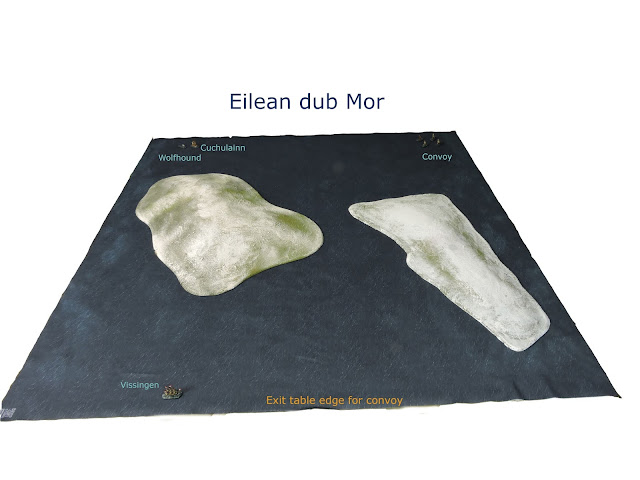 The Battle
On T1 the Privateers had the initiative and both sides used strategic moves being more than 12 inches distant. It was clear from this point that catching the convoy was going to be extremely difficult which as will unfold, took the game in a totally different and unexpected direction.
T2 had the Williamites with initiative and the lead vessel Middelburg was already close to the channel mouth with the others bunching behind.
On T3 the Privateer captain decided to hold course and attempt to open fire if his guns had the bearing but the Dutch captains were experienced men who continued with evasive manoeuvres. Having spotted the convoy Captain van de Berg turned Vlissingen into the wind and headed towards his charges. Wolfhound had attempted to cut across the path of the convoy but smart manoeuvring saw her take fire from Gelderland which caused damage.
On T4 Wolfhound held position in the rough seas and fired ineffectively at the sterns of the rapidly moving convoy whilst Cuchulainn turned sharply into the channel in pursuit but still unable to find a target.
T5 again saw the Privateer with the initiative. A broadside scored several hits on the Hoop but alas these were to be the only time any guns found their mark with the convoy which dodged and weaved its way through the channel and then around Eilean Dub Mor. Wolfhounds course brought her to grief running aground at the mouth of the channel whilst the enemy slipped through her fingers and Cuchulainn faced up to dealing with the larger problem now presented by the Vlissingen.


Ostensibly, the game was over and a non event by T8 and then the realization that the two large ships were squaring up for a duel in the frozen Scottish seas made for an unexpected of action. 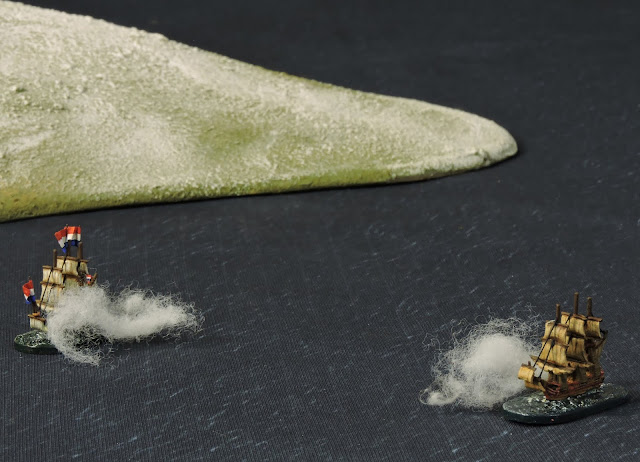 Turns 9 and 10 saw the warships manouevring to line up their approach with broadsides being exchanged on T11 of the southern tip of Eilean Dub Mor. Initially the Dutch vessel was more accurate with her fire and Cuchulainn's reinforced hull allowed her to stay in the fight when other ships of her size would have been in trouble. Sailing off the southern edge of the table the board was reset on T12 with the duel continuing from the top right of the original map and the islands removed and replaced with a single land mass in a different orientation.
In T13 each captain attempted to gain the advantage with van de Berg in the windward position. T14 saw the confident Dutch captain alter course to starboard in an attempt to cut across the privateer's bow. He too altered course and the speed and direction of the Vlissengen made it clear collision was  inevitable.


Vlissingen rammed into Cuchulainn on T14 causing substantial damage but she was also badly hurt by that stage. Vlissingen grappled successfully but at that point the privateer poured a broadside into the Dutchman crippling her. The privateer crew were ferocious in their defence repulsing the enemy crew and taking the fight onto their deck. Seeing his men overwhelmed Captain van de Berg struck his colours surrendering his ship.

The Privateer Captain possessed a hard one prize and not the one he expected from today's battle. His ship was heavily damaged (66%) but still seaworthy. The reinforced hull had prevented her becoming inoperative. I have promoted the Cuchulainn's crew to Elite as a result of their fine performance. If she is properly repaired in her secret haven she may be back in action again. Who might the captain be?

As the scenario was based on the tragedy of the Dundalk camp it struck me as apposite during some reading afterwards to find out that Cuchulainn, legendary hero and Hound of Ulster is claimed by the town of Dundalk. It is one of several Irish towns which believe the warrior originated there. Circle squared.
Reflections
That is what I love about the hobby, games often take on a life of their own. I had no intention of trying the boarding rules but they worked very well during the accidental collision. Although the Privateer failed to catch the convoy his prize may, if successfully towed to safety be sold, used for spares or repaired and put into service.. now there is an idea!
Share Share on Facebook Tweet Tweet on Twitter Pin it Pin on Pinterest
Back to The League of Augsburg