Friend of the Blog Dino, lives in one of the most beautiful parts of the world - Tuscany. He has told me he was born a Roman and moved north. He also told me he served in the regiment which descended from the Savoy Guards. That's a lot of Italy for one man - don't be so selfish Dino, share more! :)

As he also helped with the information which is included in the Marsaglia/Orbassano scenario in the forthcoming A Taste of Victory! I thought it fitting to share some more of Dino's work which has been seen on the blog before.

Great stuff and a window into an underexploited dimension of the Nine Years War and War of the Spanish Succession - The Northern Italian front!

I can't remember the manufacturer of these minis but they are beautifully done.  They may be 15mm but would pass muster for 28mm in my book! 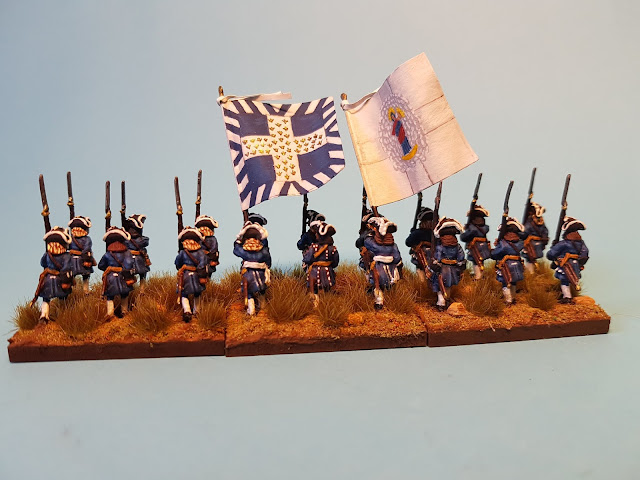 Some of the 'Enemies' of Savoy too. 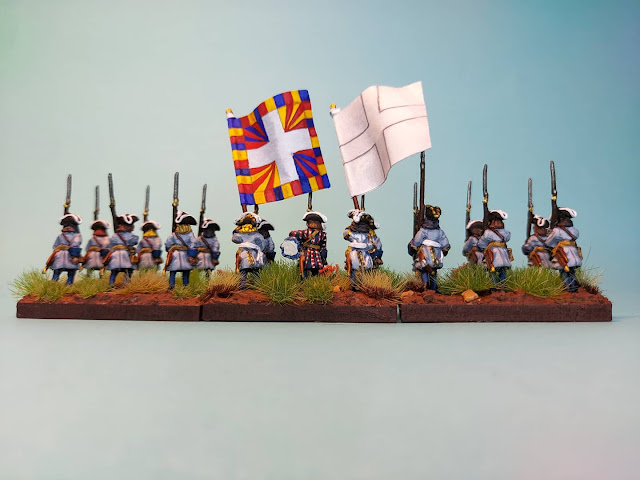 I really do hope Dino is not displeased that I also quote from his writing here giving important and useful information on Savoyard flags of the period:

Regarding the two flags the Colonel Colour with the Duchy coat of arms is based on proven sources, on the contrary the Ordonnance  is an elaboration of mine. In the wonderful book of G.Boeri, published from Pike & Shot "The army of Duke of Savoy 1688-1713"  he indicates a plain white cross on blue field, like all other infantry regiments but I strongly believe that a Guard Regiment would not accept a simple and general solution like this. Strange to say I know the mentality, having served  as officer with the 2nd Battalion of "Granatieri di Sardegna '' Regiment that has its roots  directly from the Gardes Regiment. Anyway  according to  the book "Insegne Militari Preunitarie Italiane" (Italian Pre-unity Military Flags)  from S. Ales, published by the Historical Service of the Italian Army, on page 12  is stated that ,according to a specific contract, on the 14th February 1704 the  Regiments Gardes, Crocebianca, Fucilieri, Monferrato, Piemonte e Nizza received " drappò fassonati con arme" meaning flags with design and heraldry and for the Gardes the cloth was blue, white and red, unfortunately no design included. Accordingly I opted for the classic wavy border of the Savoyard flags with the white cross on red field and the Duke monogram on the four red fields, similar to the one used by the Regiment in 1736. So this  flag, as I told, is an elaboration of mine with no proven sources but at least, in my opinion is historically "possible", and after all is more coherent with a Guard Regiment

Here I thought is also useful to show the alternative view from Peter A's collection in 15mm the Guardie Regiment of Savoy: 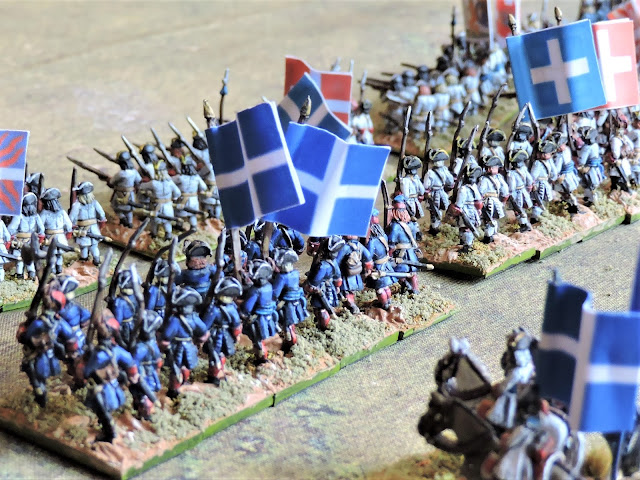