by Clarence Harrison September 19, 2016
David O'Brien - When I first saw these Cossack figures produced by Wargames Foundry I fell in love with them and had always planned to paint some up but nothing happened until I helped with the play testing of Donnybrook. The idea of painting a whole army of Cossacks didn't appeal to me but the size of forces required for a Donnybrook faction meant that my plans could come to fruition.

Now that I had planned to go ahead and paint some figures I thought I had better do some research and see if my preconceived ideas were correct. As it transpired I was wrong. My notion of large mounted forces was wrong and that most Cossack armies were mostly composed of infantry supported by the more veteran troops who would be mounted and that all Cossacks loved muskets and artillery as well as admiring horsemanship. Another pleasant surprise was the number of opponents the Cossacks fought for and against which is always a plus for me when I start a new army. The Cossacks fought for and against the Russians, the Ottoman Empire, the Polish Lithuanian Commonwealth, the Tartars and finally the Swedes. Another plus for this force was the timescale it could cover from the Deluge in the 1640's, the Great Northern War, the Seven Years War and up to the Napoleonic Wars. Because the Cossacks tended to live around the river basins of many rivers emptying into the Black Sea they formed a maritime trading empire which they also used in their raids, especially against the Ottomans. At one point they even raided as far as Constantinople and burnt down some of the outlying areas. All of these points I have listed above lead to a very versatile force with a variety of opponents, fighting techniques and varied theatres of action, all perfect for fighting Donnybrook battles.

This photos show the force as it currently stands with two units of horse, one drilled and one veteran, three units of drilled musketeers, one unit of recruit peasants, a gun and crew and a variety of characters. 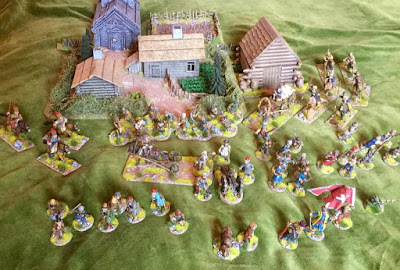 This is my leader in the middle supported by a priest and standard bearer. 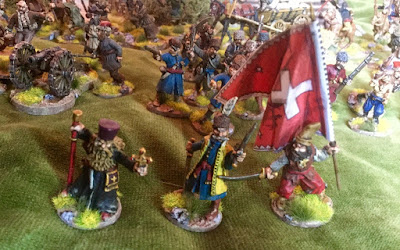 This is my packmaster Boris, I wanted something different for my Cossacks so I have Doris the bear which fights exactly the same as a pack of dogs. 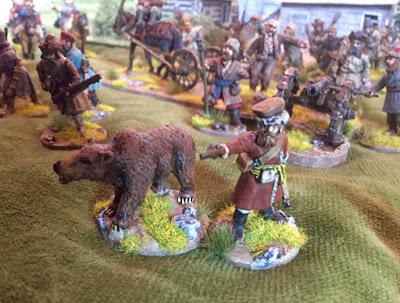 Deadeye Dimitri is my huntsman/sniper. 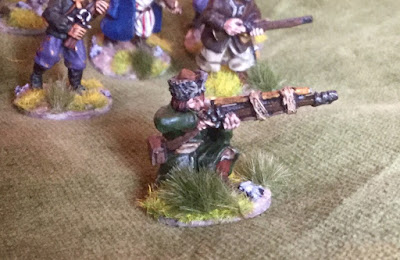 Cossacks like guns so I wanted to include a light artillery piece to support them... 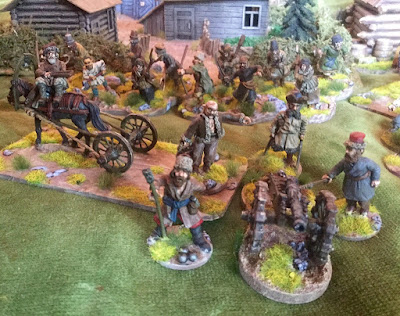 Limbered up and ready to roll! 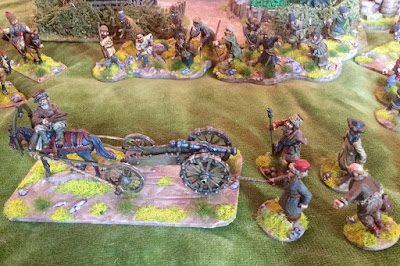 These are my three units of drilled musketeers. Although I have classed them as drilled they are not trained to shoot in close order so must always deploy in open order. I also ruled they have no sergeant character available to help them with their shooting - this makes them less effective against regular troops but that is what I was looking for. 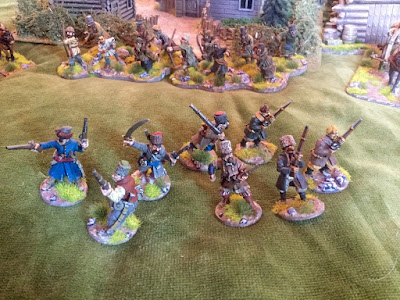 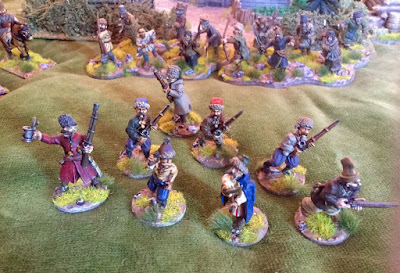 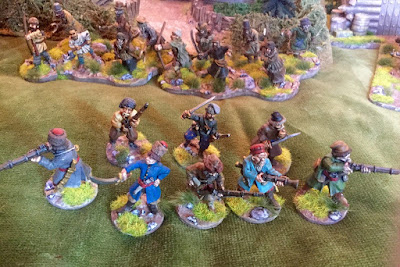 Peasants defend their village led on by the priest who stays safely in the background. Most of these figures are from the Perry's retreat from Moscow range with a few additions from unknown manufacturers. I think there is even a Dixon dark age figure in there. 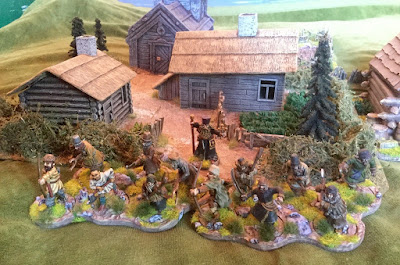 Here are my cavalry - the top photo is my drilled unit and the bottom are veterans. I have given all my Cossack cavalry the evade ability should they wish to avoid being charged by opposing troops or characters. Once I eventually get around to painting mounted characters they will also have an expert horseman ability which will allow them to do special tricks, just to make them different from regular cavalry. 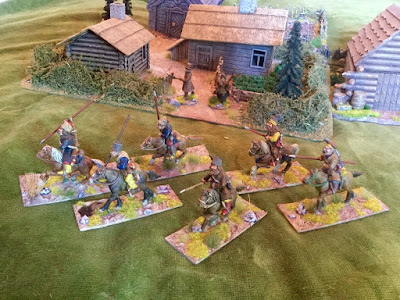 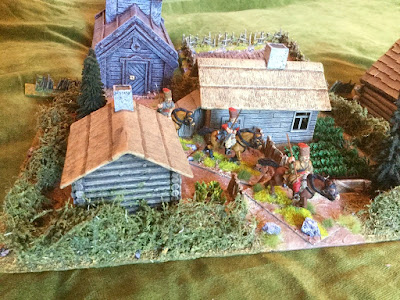 Finally (so far), this supply wagon could be used as extra ammo supply during the game or could be an objective marker for the enemy to capture or destroy. 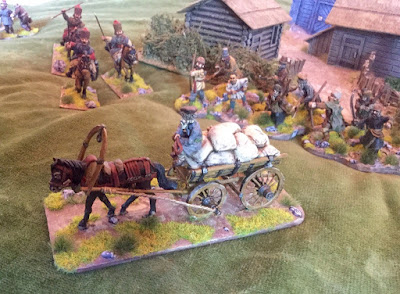 I have another unit of cavalry on the way and I would also like to add a pike unit to the infantry as the Cossacks seemed to use quite a lot of pikes in their armies, especially when facing strong cavalry armies. Most people always associate the Cossacks with masses of cavalry which they certainly used for fast raiding in land but when I was doing my research I discovered that a large percentage of their raids especially against the Turks were river and seaborne operations so some boats are another aspect I can add to this force.

Editor: Yes! This is EXACTLY how Donnybrook is meant to be played! While you can simply follow the lists provided, we encourage you to mix and match characters and units and add your own special rules to model the force that fits your narrative. You will notice Dave placed limits (forcing the foot to always deploy in open order for example) on his units as well as new advantages (the evading cavalry). Again, that's how you do it. Have your own custom Donnybrook force? Drop me a note at quindia@gmail.com to get it featured here!