by Clarence Harrison December 07, 2013
Clarence Harrison - Donnybrook will be sent to the printer in a few days and will be available for pre-order very soon (watch this space). It has taken a year of work that I have thoroughly enjoyed. There is a full feature next month in Wargames Illustrated, but our loyal readers get a sneak peek here! 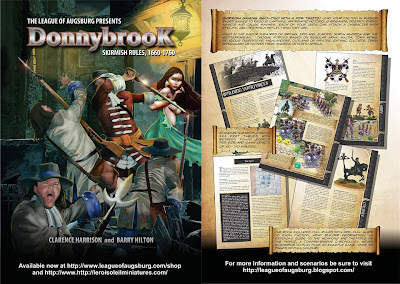 Donnybrook is a fast paced skirmish game designed to cover conflicts across the globe from 1660 to 1760. The basic game of requires a force of 12-48 models, depending on their quality, and one character who represents the player on the table top. Games are played on a 4x4' table. You can add additional units and additional characters as you like, as long as both sides use the same conventions, though you'll need a larger table as you increase the numbers! Donnybrook uses a card driven turn system that creates exciting, unpredictable play. Besides leading government troops into battle, you can choose mobs of armed peasants, murderous brigands, religious fanatics, sinister cultists, ferocious highlanders, or tribal natives. The book includes the rules, faction lists, weapons primer, random events, seven scenarios, a thrilling battle report, a period and theater guide, and a double sided playsheet. The finished book is 112 pages and contains more than 150 awesome photographs by Mr Hilton! 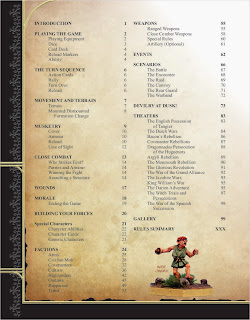