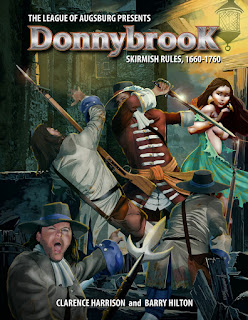 Clarence Harrison -Donnybrookis a set of skirmish rules for 1660-1760 due out later this summer. The impetus to create the game came from a conversation I had with Barry last year. We were discussing the various projects we had in the works and talking strategy for increasing our market presence (mostly BS-ing actually but didn't that sound professional?), when I mentioned that I thought we really needed a way to introduce new players to the period and a skirmish level game seemed like the perfect vehicle. The model seems to have been very successful in other periods, so why not in ours? Players could collect and paint a very reasonable number of models (Warfare Miniatures would be perfect for this) and get gaming straight away. Barry readily agreed and then asked if I had something we could use...
As it turns out, I actually did. I have been using my own rules for skirmish battles for a decade and have used them with everything from Warhammer Fantasy models to late 19th century Colonial Africa. I laid out the basics of the game for Barry on the phone and he said, " Sounds great... Get writing!"
First of all, my contribution to our partnership thus far has been limited to making the books look good... Layouts, artwork, photos. I have helped with game design in small measures (and mercilessly flogged the skirmisher rules in Republic to Empirefrom a paragraph to a full chapter) and provided feedback on mechanisms, but my actual writing has been limited to introductions and a short essay on painting in BLB2. I've done plenty of writing in other genres, but never really attempted to write wargames rules for actual publication. My skirmish rules were on one side of a single sheet of paper because that was one of the parameters I set when I designed them. I had a lot of writing to do!
Ok, to be fair, after "Get writing!" Barry added "Let me know what you need from me.", but I left that out initially because the first thing that went through my head was "Cr@p! He wants meto write it!" Barry is a published author many times over so being handed the reins felt a little surreal. In the end it wasn't as bad as I had imagined. The rules are solid, having been played many times over the years, and most of my work was taking the brief sentences I used to define an action for myself and make them clear to a wider audience. Barry and Dave O'Brien ran numerous games without the benefit of having me at the table and this proved invaluable as weaknesses were quickly exposed - normally in my explanations, not the rules themselves. Their games also helped to find the missing elements needed to take the rules from a generic set and ground Donnybrookfirmly in the period.

The basic game of Donnybrook requires a force of four units of 3-12 models each, depending on their quality, and one character who represents the the player. Games are played on a 4x4' table. You can add additional units and additional characters as you like, as long as both sides use the same conventions, though you'll need a larger table as you increase the numbers! The game uses a card driven turn system, with a deck containing one card for each character and each unit on the table, one reload card (black powder weapons were notoriously slow to reload once fired), and one turn over card (reshuffle the deck... Yes, this means that not every model gets to act every turn!). When a character or unit card is drawn, they take a full turn - rally (if necessary), move, shoot, and melee. When their turn is finished, another card is drawn from the deck. There are several variations to the card system to allow you to tailor the action to the style of game you prefer.
Actions are resolved by throwing a die and comparing it to a target number to determine success or failure - shooting, for instance, requires a 6 or better to hit. Donnybrook uses those funny dice more commonly found in role playing games and the type of die you throw is determined by the quality of the model... d6 for recruits, d8 for trained soldiers and warriors, and d10 for elite troops. There are a short list of modifiers as well, but such things have been kept to an absolute minimum to speed play. 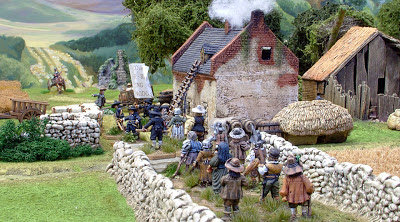 The rules are simple enough, but the heart of the game are the factions. These are 'army' lists designed to guide your force selection and add loads of period flavor. I worked out a rough format for the Army faction (the regular government troops of the age) and made few brief notes for other faction and character ideas and dropped the mess into Barry's lap to utilize his 20+ years of experience in the period. The results are fantastic. Besides marching government troops into battle, you can choose mobs of armed peasants, murderous brigands, religious fanatics, sinister cultists, ferocious highlanders, or tribal natives. Each faction is painted with a broad brush to allow the player to come up with his own narrative. For instance, an Outlaw force might be dashing highwaymen, desperate deserters, common brigands, wily smugglers, or swashbuckling pirates!

While you can play the game perfectly well with a handful of units, Donnybrook is ultimately designed to be a character driven game. Once you have the basics of the rules in hand you will want to start adding these optional models. Each faction has a number of unique character models that allow you to enhance the performance of your units, hinder your foes, or grant a number of other special abilities to you force. Giving these characters names or even designing a backstory will add to the narrative element of your games...
We are nearing the book's completion. The main part of the book is finished and awaiting the final photos. There are a couple of chapters to write, but they should be done in short order. With our creative team consisting only of two very busy people, we don't try to set deadlines, but it is my hope to send the book off to the printer soon. Of course as we know more, we will post the news here!
Share Share on Facebook Tweet Tweet on Twitter Pin it Pin on Pinterest
Back to The League of Augsburg