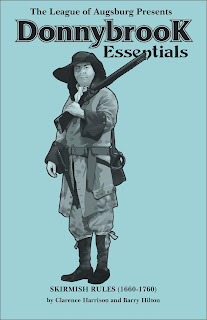 Clarence Harrison - It's been ten years since Barry and I published Donnybrook, our skirmish rules for 1660-1760. The book has been sold out for a while. We intend to release a second edition with the detail and full color treatment for which we are known (no date... it's in the queue... lol), there's a project I've been wanting to do for a while.

My introduction to wargaming was with the black and white booklets, wrapped with cardstock covers and saddle stitched bindings of the 70s and 80s. I love the slick production and beautiful photographs found in modern publications, but I still drag out these old books from time to time—WRG's Wargames Rules 3000BC to 1485AD, De Bellis Antiquitatis, the original Dungeons & Dragons, and many offerings from Partizan Press (including David O'Brien's Skirmish Battles of the American War of Independence).

The old school renaissance in gaming isn't new. There is something very charming about these old books and it's long been an ambition of mine to do something similar. 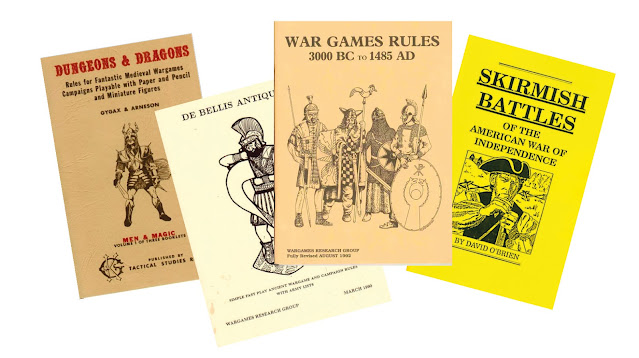 The day before Christmas, I sat down at my computer to try and get an idea of what an old school version of Donnybrook might look like. After laying out a few chapters, my OCD took over and I was hooked. Over the course of the next few weeks I spent many hours forcing the manuscript into the half-sized pages and madly scribbling new drawings (or reimagining old) with which to crown the tiny volume. Finally, I had a couple of copies produced by a local office supply store. 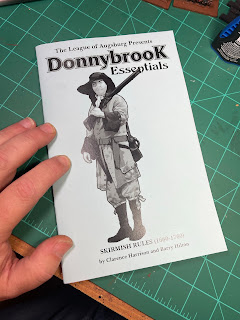 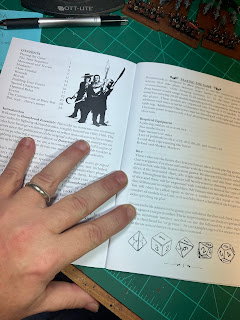 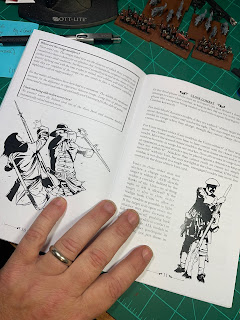 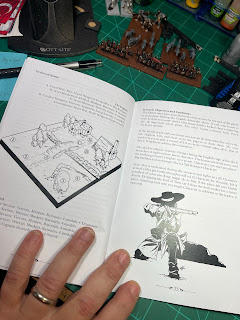 I am extremely happy with the results. The book is 5.5"x11" and 36 pages, printed on 24lb matte paper (the shine in the photos above is just the desk lamps reflecting the ink) with a 110lb cardstock cover. It will include a full page, double-sided play sheet (folded neatly tucked inside). All of the rules needed for swashbuckling adventures can be found in Donnybrook Essentials. 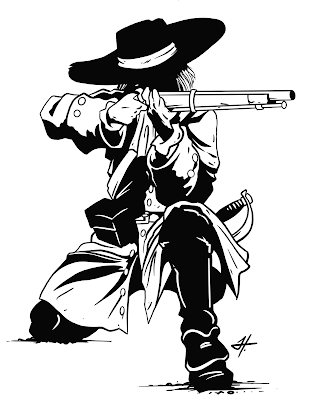 So how is this different than Donnybrook?
First and foremost, there are rule updates—not a ton, but there are a few things over the years that haven't worked as intended or were just unclear. Troop ability types have been changed to match Beneath the Lily Banners, with Recruits becoming Raw and Elite, Veteran. If you already have a copy of Donnybrook, you don't NEED this book, but you may find it handier to use at the game table.
The largest change (and biggest omission) is the lack of faction lists. I've long intended to change how these were presented. They have always been meant as guidelines for new gamers, but were never meant to be set in stone. Barry and I break them on a regular basis to fit the stories we tell. Factions WILL return in the second edition, but didn't seem necessary for Donnybrook Essentials.

To ensure you still have plenty of variety when building your forces, Special Characters have been expanded. There are nine "generic" Characters you can choose to bolster your forces. While some of these Characters are more appropriate for certain armies, your narrative may justify their inclusion in your force. For example, the Master of Hounds may be a common component of a Highlander or Cultist force, but if your Army Captain's raison d'être is hunting, he may have a pack of wolfhounds in tow. 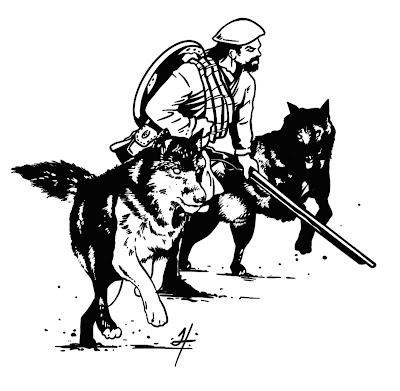 Donnybrook Essentials also features an Events section, optional rules, and a sample scenario (The Curious Case of Peter Pett, adapted from one of Barry's 4Play scenarios). It will still be a couple of weeks before this is available as we work through the logistics, but it will be offered in hard copy and PDF. If you buy the book, we will include the PDF free of charge.
Watch this space for where and when you can get your copy!
Share Share on Facebook Tweet Tweet on Twitter Pin it Pin on Pinterest
Back to The League of Augsburg