by Clarence Harrison January 22, 2018
Cat Reddington-Wilde: Several of us at the Boston Trained Bands gaming club have been working on a big Donnybrook convention scenario to bring to Huzzah! in Portland Maine this May. And I have fantasies of bringing it to Crisis in November if I can sort out the logistics and financing…

Rewind to the beginning of the project: Last summer, I was searching for likely rules to use for a some Gothic Horror gaming and picked up a copy of Donnybrook. These not only looked great for some light Gothic Horror, but also for French and Indian War. FIW has tempted me for decades, but Donnybrook is the first set of rules to actively lure me into buying figures and actually getting started in the period. FIW + Gothic Horror? Why, that leads straight to Sleepy Hollow of course!

Sleepy Hollow was haunted long before The Hessian lost his head during the Revolutionary War. Setting a game during the French and Indian War brings a great many factions to the game. I started asking questions on The Miniatures Page about good proxy buildings to use for the fictional set of Tim Burton’s Sleepy Hollow movie (1999).

Then Joerg Bender who runs Things From The Basement sent me a PM saying he would love to make laser-cut kits of the buildings from the movie. Well, that was an offer I couldn’t refuse. What was going to be a small side-project suddenly became a big main event. Asked some likely suspects at the club if they would be interested, and Sleepy Hollow was launched.

At the time of this writing, the first cuttings of ‘Inspired by Sleepy Hollow The Movie’ kits have just arrived on my doorstep, and are available at Things From The Basement.

Bokkenrijders in Sleepy Hollow? It is a Dutch community after all; any Bokkenrijders fleeing Europe would find the Hudson Valley a natural place to go. Many disaffected locals would find a natural calling to join the Bokkenrijders: any disgruntled citizens, including women (in this period of NY history, any adult single women was liable to be considered a witch and shunned by the community), runaway slaves, and Indians (surviving remnants of the local Weckquaesgeek Tribe, and the dwindling Wappinger Federation, had been assaulted over the course of a century by both the Dutch and the Iroquois and had some scores to settle).

On to the figures — between the convention game scenario and other games at the club, I wanted a force of at least 6 units. Eventually wound up with 7, plus an assortment of special Characters to choose from for variety’s sake.

Collecting figures for Bokkenrijders takes some scrounging. The biggest single source is Outpost Miniatures’ Highwaymen range and a few others of theirs, then Front Rank next. Outpost’s horses are quite smaller than other manufacturers, so I special ordered their riders without horses, and then ordered the horses from Front Rank who sells them separately. Other Bokkenrijder figures came from far and wide: Bad Squiddo, Blue Moon, Dixon, Foundry, Gripping Beast, Irregular, Warfare, and West Wind (whew, I think that’s all). Many of the figures needed some conversion work, facemasks at least. Irregular Miniatures is the source for Hatchets and Trail Axes, vital for conversions for this period. Other weapon packs are from Redoubt.

First, here’s all the Bokkenrijders primed and ready for the paintbrush: 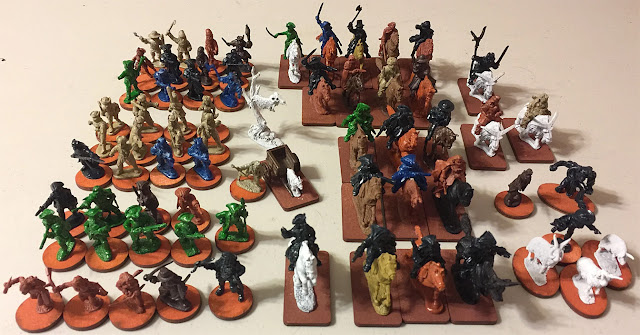 Now for the sausage-making and how they became Bokkenrijders…

9 Mounted Recruit and 6 Mounted Drilled figures, these received simple kerchief facemasks as needed. The one on the grey horse is the only mounted female figure in a tricorne currently on the market — Bad Squiddo’s Catherine The Great:

3 Mounted Elite and the Leader, de Zwarte Kapitein. The Black Captain is modelled after a major character in the Dutch TV miniseries, De Legende Van De Bokkerijder. The series is on YouTube. If you like Bokkerijders, watch it! It’s in Dutch with no subtitles; that doesn’t matter. Between the acting and the staging, it is pretty easy to follow most of the plot and enjoy the show. The facemasks for these figures are all in the style of the Kapitein — shaped masks coveing the nose and the upper portion of the face. These were carved in by making a shallow relief line under the cheekbones and will show up in better detail after painting. Bokkenrijder and Bokkerijder are different dialectical spellings.

The figure on the black horse was originally planned as the Leader of the faction until I watched the TV series. The mount is a Front Rank Medieval Horse with Head Armour. Then I took an old D&D Chimera figure, sliced the top half of the goat’s head from that (including snout, ears, and horns), and spliced it on top of the horse’s armoured head with a bit of carving and fitting. 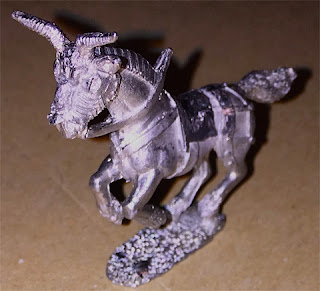 Here’s a side view of the armoured goat-horse and de Zwarte Kapitein. The Kapitein himself is a Front Rank figure of a French Standard Bearer with all the lace carved away, and the coat extended into a long riding coat with a large capelet. The open hand for holding the standard has been re-shaped into the menacing attack gesture of the Bokkenrijders (go watch the show!). 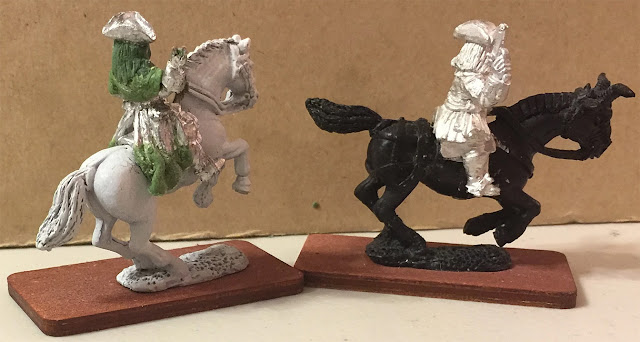 (3) actual Buck-riders, and (1) Abomination for some of the Characters. The mounts, the Standard Bearer,and the Abomination are all by West Wind. With carving and bending, re-positioned the horns of the Abomination; I will treat this character as a Troll or something similar. The rest are a command pack from the Dwarf Wars range. I did some heavy carving on the Standard Bearer to bring his girth down to better match all of the other figures. I spliced the legs of the other buck riders with tops from female Reaper figures to make a Hero with a longsword and a Witch with a hatchet and a bow on her back. Reaper figures are 32mm tall, but splicing the torsos onto seated legs brings them down to 28mm size. These facemasks include goat-horns.

(n.b. Witches in the Hudson Valley are not withered old hags. When shunned by the communities, they live on the edge of the wilderness and must be competent to hunt food and provide for themselves. Mother Hulda is one such historical witch and sharpshooter who saved Tarrytown during the Revolutionary War — she will be appearing in another of the factions for this scenario.)