Foot Mob #1 received head masks with twisted cloth goat horns, in the style of those worn by the mob in the TV series. Some horns are added with bits of green putty. Others are carved in. Figures that started with hats, I carved down the crowns to be head-wrap size and clipped off most of the brim, but left some bits of brim to carve into horns and bend up along the head.

Foot Mob #2 received simple kerchiefs over their faces. Both foot mobs include a female pirate figure; there is not a lot of choice for available 18C female fighters. And the female pirate ones tend to be scantily clad, so these two needed a trip to the green putty clothing department.

Deserters & Veterans are a drilled quality unit with an optional Sergeant character. These have upper-face masks carved in, similar to the mounted elite unit. The firing line comprises some Freitag Jager figures by Front Rank with their lace carved away. The deserters will still be wearing their old uniform from the fairly recently formed Hesse-Kassel Jägers. Hessians in Sleepy Hollow — what could possibly go wrong?

Archers’ Scouts is an elite unit that gradually grew out of 2 character concepts. Mrs. Archer, the founding figure iof this group is a Vampire Hunter from Bad Squiddo. She can optionally serve as a Weapon Master character. One of the Bokkenrijders in the TV series is a Robin Hood quality shot with crossbow! Mr. Archer with in the hat is a heavily converted Outpost figure who was originally carry a strongbox under one arm. The hand with bow and the quiver on his back came from an Indian figure. The Archers are back-story figures from the Tim Burton movie. The movie’s antagonist, Mary Van Tassel, was born Mary Archer. The back of the fireplace in the ruins of their old cabin shows a carving of Mr. Archer in the hat with a bow. Rounding out the unit are (3) converted Wappinger Indians armed with bow and gunstock warclub (long sword equivalent). 17C woodcuts show Wappingers with long hair, and the green putty hair salon provided that detail. Gunstock warclubs seemed like the best choice for a hand weapon. Alas, gunstock warclub miniatures are not commercially available. However, a sprue of Front Rank’s flintlocks provided all the material needed to carve the clubs with their characteristic doe-foot tip. The metal is soft enough to bend to shape before drilling the socket for the blade The bayonet tip carves into the traditional heart-shaped blade with a pin for attaching solidly into that drilled out socket. 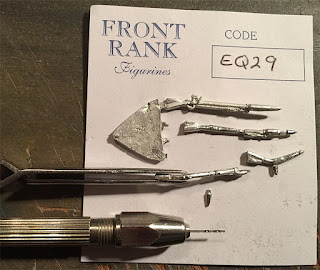 Making the Hoeder der Helbokken fun and easy character conversion. That’s Dutch for Master of Hell Goats with special thanks to Bernard Renooij for helping with my vocabulary quizes. The Hoeder figure is an Outpost Wicked Lady figure with her pistol removed. (I used another of these figures with the whip removed in one of the Foot Mobs.) The Hell Goats are Gripping Beast Manx Loaghtan Sheep, slightly reposed. When finished, they will be standing on rocks. And they will look much more fearsome in their scary Hell Goat paint jobs.

Rounding out the other bits for the force, we have young Martien, a Redoubt Street Urchin converted to match the image of the protaganist from the TV series; a tree with goat skin for a ritual focal point (Golden Fleece model from Crocodile Games); goat cart by Eureka, with 15mm spoked wheels replacing the modern pneumatic ones of the original kit; and an Enemy Within figure wearing no mask. That mysterious unmasked figure is one of the limited run promo figures made for Crisis several years ago. 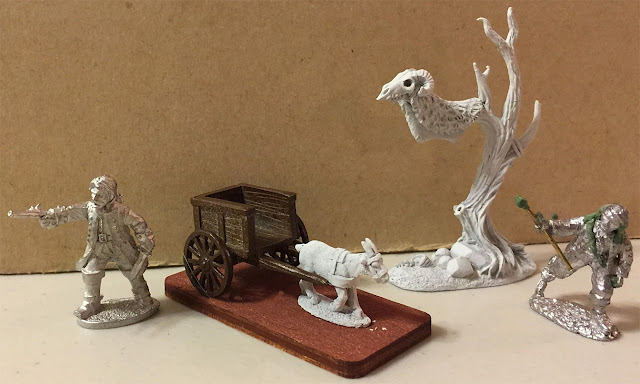 After I had been asking questions on The Miniatures Page forum about availability of Bokkenrijder figures, Willie Bogaerts from the Tin Soldiers of Antwerp very graciously offered to send me one of the remaining promo Bokkenrijder figures. I certainly hope to cross the pond for Crisis — there is a growing list of people in Belgium to whom I owe a beer!