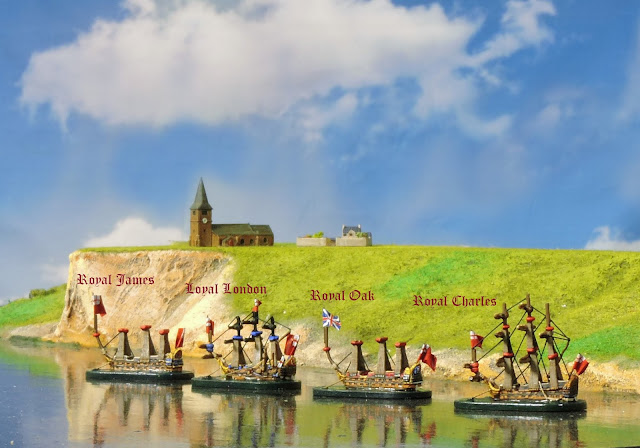 The fascinating Dutch raid on the English fleet at anchor in the Medway in June 1667 is full of wargaming potential. 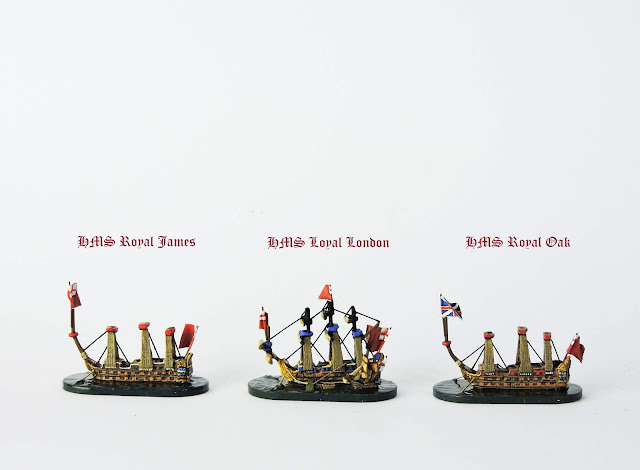 One of the most spectacular incidents occurred on June 13th. Having broken the English defensive chain at Gillingham, the Dutch rounded a bend in the river and were faced with the straight stretch between St Mary's Island and Chatham Royal Dockyard. This strategic installation was one of the main factories of naval production and if destroyed, English sea power capability could have been set back by a couple of decades. 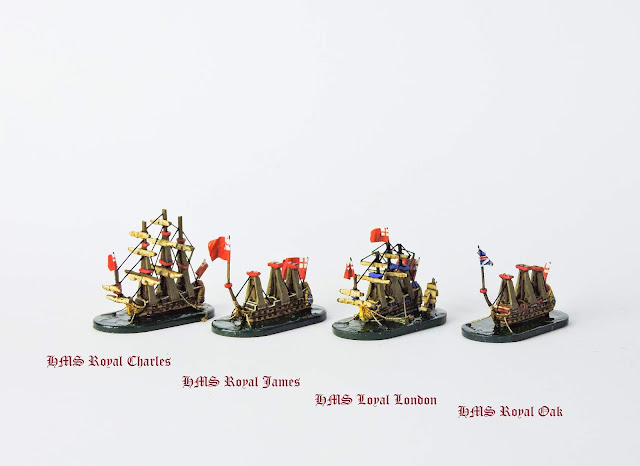 For reasons of economy, the King had put much of his battlefleet to sleep over the winter of 1666/1667. The technical term for a warship which has been rendered unoperational is 'in ordinary'.
This usually amounted to partially dismasting the vessel and removing the sails and spars. Guns were often taken off the ships and the crews reduced dramatically. This ships were effectively removed from active duty and anchored somewhere safe. All along the Medway from Gillingham Reach to Rochester Bridge over twenty ships of the line were in such a condition.

Three of the largest vessels lay in line astern south of Upnor Castle and just down river of the dockyard. These were HMS Royal Oak, HMS Loyal London and HMS Royal James.

On the 13th, the Dutch decided to attack these ships. They used four frigates and a number of fireships. Anticipating the loss of the three stranded battleships the English had opened holes below the waterline and partially sunk all three vessels to prevent the Dutch boarding and sailing them back to Holland.

In effect, the ships were no longer dangerous predators but sitting ducks. The battles and scenarios come later. This piece focuses on how I modelled the three mighty men o'war in their state of ordinary. 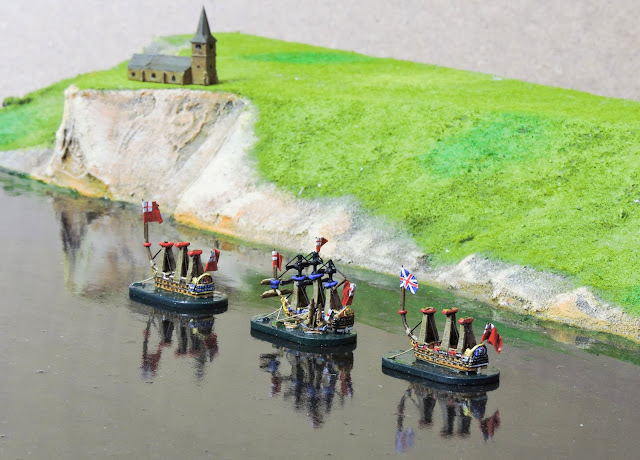 I wanted them to look formidable but in various stages of being dismantled. I chose to use 1st and 2nd Rate models from Tumbling Dice. I removed sections of mast and in some cases rebuilt versions of the temporary rigs sometimes put on ships in ordinary. Around them are moored longboats and floating platforms to signify work being done.

The profiles of the ships are as follows: 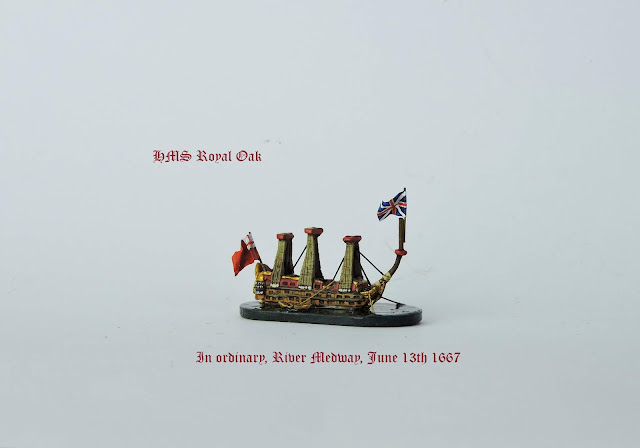 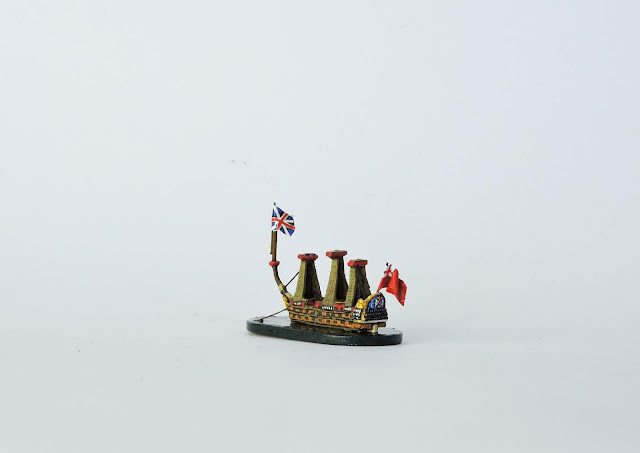 She was burned and destroyed by scuttling and fire during the Medway Raid. 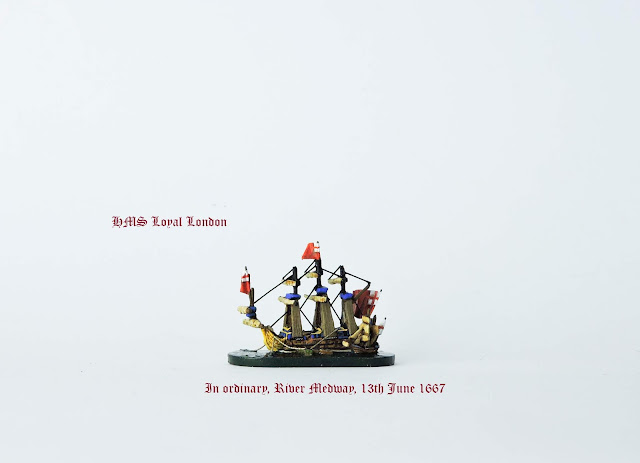 HMS Loyal London: 2nd Rate, 80 guns. Built at Deptford Dockyard and launched on June 10th, 1666. This powerful and modern ship never saw action and was destroyed by scuttling and fire during the Medway Raid. 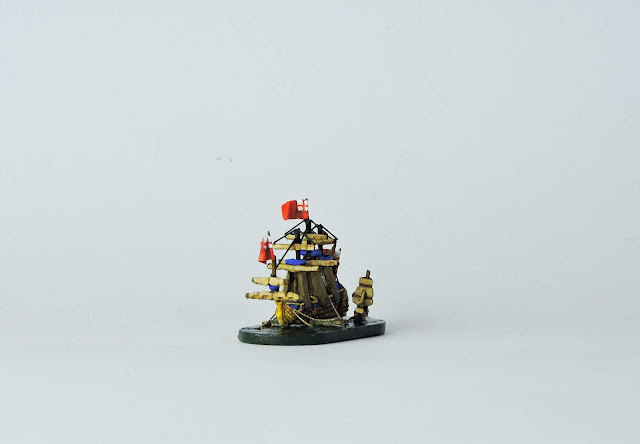 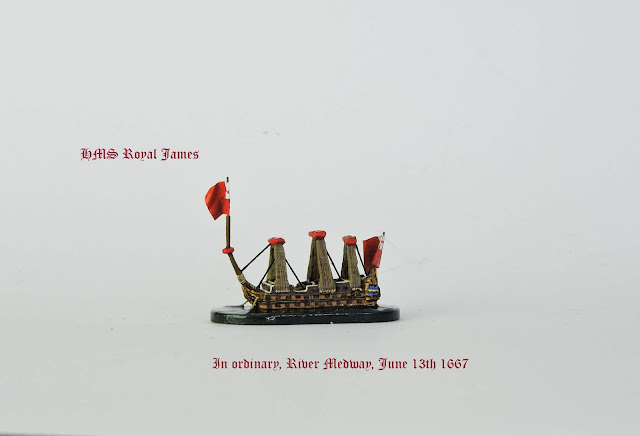 Royal James started life as the Richard  a 70-gun, 2nd rate named for Richard Cromwell, Oliver's son. She was renamed after the Restoration and upgraded to an 82 gun, 1st Rate
She fought at Lowestoft, 3rd June 1665 and was the flagship of Prince Rupert, The Four Days Battle on June 4th 1666 and the St James's Day Fight on July 25th, 1666. She was burned and destroyed by scuttling and fire during the Medway Raid. 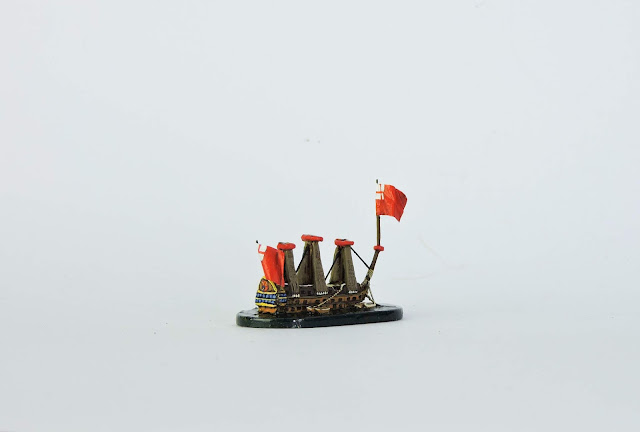 The greatest prize of all was the English flagship HMS Royal Charles. Originally it was supposed to have been moved upriver from Gillingham Reach but in the confusion remained at its mooring. It was abandoned by its skeleton crew and captured by a Dutch boarding party which walked on to a ghost ship. The Dutch managed to tow Royal Charles down the treacherous Medway in a feat of navigation that the English said would not have been possible for their own local pilots!


The ship was taken to Holland and put on public exhibition much to the embarrassment of Charles II  after whom it was named. The Dutch did not use it as its deep draught did not allow it access to some of the shallow anchorages used by the Dutch fleet. I have chosen to model Royal Charles partially rigged to differentiate her on the tabletop.  She will be one of the main objectives of the mini campaign - either her protection or her capture. 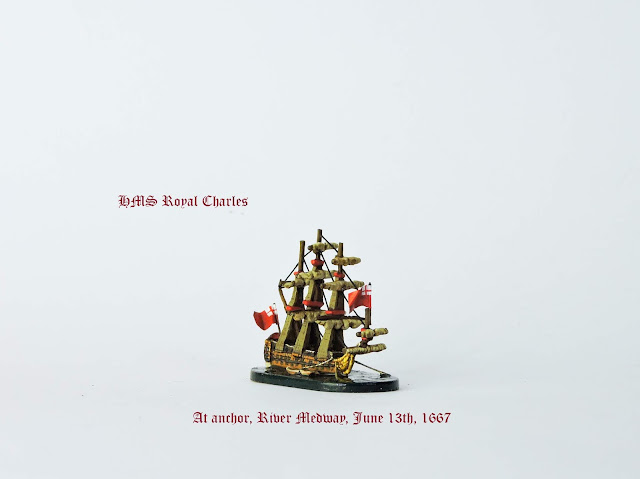 Royal Charles began life as the Naseby a 60-gun, 2nd rate named for the famous Parliamentarian victory of 1645. She was renamed after the Restoration and upgraded to an 82 gun, 1st Rate even larges than the famous Sovereign of the Seas.
She fought at Lowestoft, 3rd June 1665 and was the flagship of Prince Rupert, The Four Days Battle on June 4th 1666 and the St James's Day Fight on July 25th, 1666. 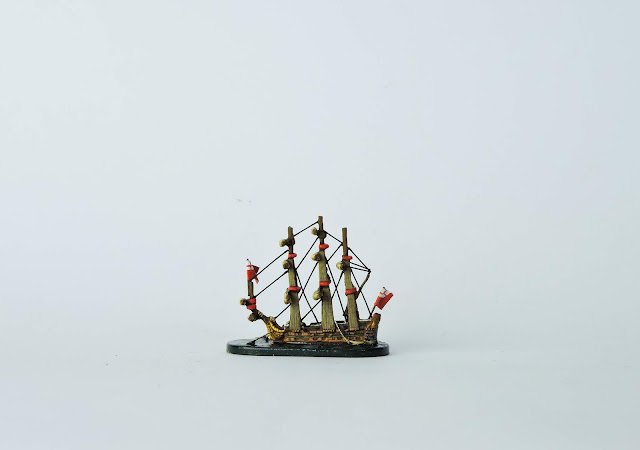 She was captured during the Medway Raid and put on display in Holland until being sold for scrap in 1673.