Epic action in a square foot

I have finished my intensive activities around the Battle of Vågen 1665 and am duty bound to report that from an English perspective, it is the equivalent of setting your computer AI to Extreme Difficulty level. Three iterations of the battle - the historical, an amended order of battle including some heavier English units which were present but did not participate in the battle line and finally, a risky fireship attack using Teddeman's 3 fireships all ended in failure.

Not that it couldn't have gone the other way. Two of the runs looked like the English would win but then, fate or the Wargaming Gods intervened and potential triumph turned to disaster. I found the entire action absorbing and trying various combinations of tactics including - early replacement of damaged ships and concentration of fire on specific targets all produced a degree of insight and success.

The Dutch fleet is very strong. Its ships are larger and have more guns. The work is all with the English to be creative and, lucky. Each game lasted between 60 and 90 minutes and as I was playing I realized that using the cut outs from Mad for War Essentials the game can be reproduced in 1/1200. The table would probably need extended to a massive 18 inches square!

The somewhat ironically titled Rats in a Barrel 4Play scenario pack provides the opportunity to understand all of the circumstances which conspired against the English such as the weather and wind, the hostile Norwegians, the larger Dutch ships, the poor choice of ships in the battle line and the determination of the Dutch sailors to defend their £500,000,000 cargo. 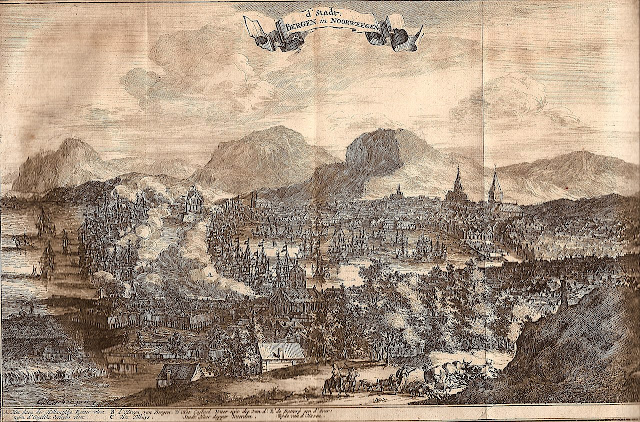 I responded recently to a comment from someone who said, 'with no ability to move, is this really an interesting wargame to play? Surely its just down to dice luck? Well, that is one view but I don't subscribe to it for several reasons - Many of us are interested in understanding history so, walking through these scenarios gave me a wider and deeper understanding of the war, the geography of the conflict, Bergen, the VOC fleets and their construction, the epic scale of the wealth moving by sea and thus, the very essence of the reasons behind the three Anglo-Dutch Wars, what happens when two static fleets batter each other for three hours (very similar to many land wargames particularly conflicts from 1600 to around the  1780s). Rolling the dice, managing the damage and repair, ammunition supply, movement of wrecks in and out of the line kept me busy and was great fun too - the main reason for doing it.

After the initial powerful, coordinated volley fire from the fresh fleets - the fire deteriorated into ragged, irregular shooting. As some ships were beyond musket range, the number of shooting dice was halved. I would say overall, the English were less lucky with the dice than the more powerful Dutch. 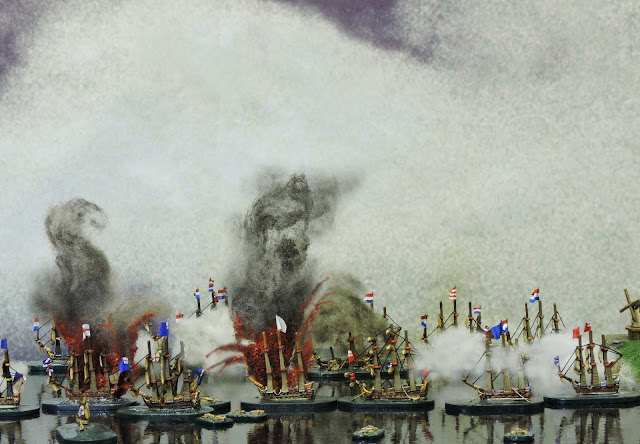 I actually played the scenarios in the order 2, 3 and then 1 for no other reason than I had set the boards up to be photographed in that order. The best chance of winning for the English was in my opinion the 2nd iteration but a few disasters occurred in that game and their windows of opportunities swung shut very quickly. The fireship attack game was a piece of wargaming gold - A Dutch fireship attacking the English flagship was targeted by an English fireship  redirected to protect 'The Queen'. As both fired, they simultaneously exploded in the confined space between the two fleets causing cataclysmic damage due to the proximity of all of the ships. 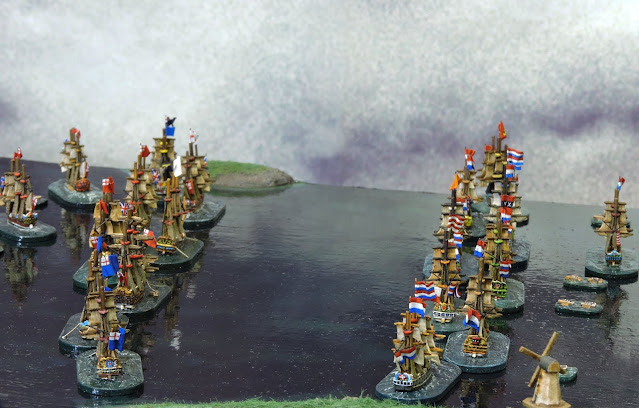 Maybe I get different things from a wargame than the norm, I really don't know. I don't care who wins or loses. I am fascinated by circumstance, choices and consequences. Rolling dice is always fun and I don't know how many times during my four evenings of play I muttered sotto voce, no one will ever believe that, people will think I made that up etc. The explosion of four magazines in a single game (The historical Battle of Vågen scenario) was such a moment especially when Wapen van Hoorn went up in Turn 1 and then an English ship did the same in Turn 2 and two more simultaneously in T4 ending the battle. 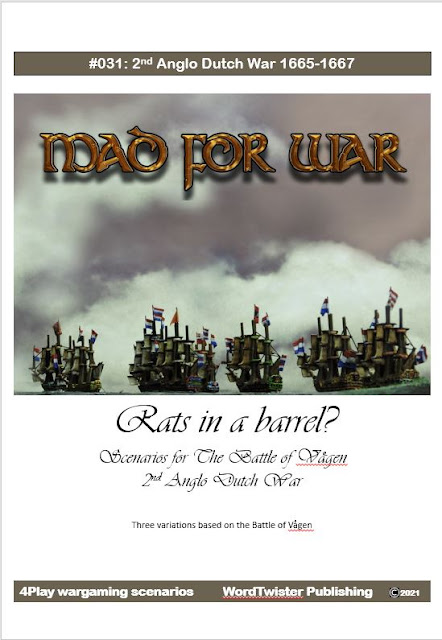 I commend The Battle of Vågen to you. The 4Play pack is one of the biggest I have done so far coming in at a whopping 38 pages.  I just couldn't stop digging! It will be available soon.