It is crammed full of desperate struggles, politics, mistakes, heroism, incredible stories and legendary commanders. When I read Frank L Fox's fantastically entertaining retelling of the battle one particular tale stood out - the story of the English ship Henry. Henry was the flagship of Rear Admiral John Harman and belonged in this battle to the White or van squadron of the fleet. Henry was a large, powerful Second rate ship with 80 guns and a crew of nearly 450 men. 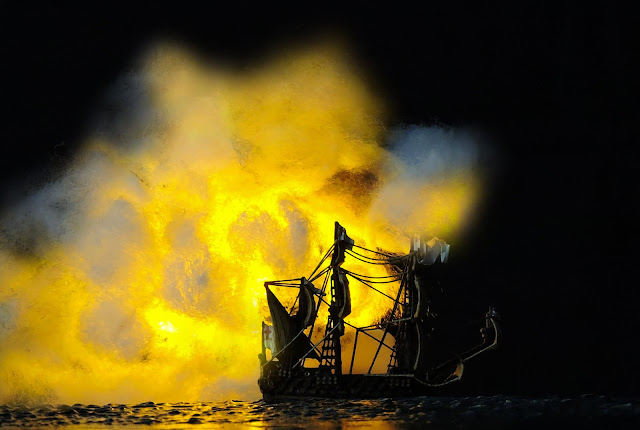 Having been in action all of the first day of the battle, she was forced to make emergency repairs to her sails late in the afternoon of June 1st. Having taken considerable time to do this, she found herself alone in the fading light, with the rest of the fleet well out of sight. She then began an epic journey sailing in the darkness through the entire Dutch fleet which had just broken off engaging the English fleet and was sailing south east towards safer waters to refit and rearm for the next day's fighting.

Henry first encountered no less a vessel than De Zeven Provincien, de Ruyter's flagship. Engaging with the famous admiral and holding her own, she then ran straight into the rest of his squadron. Having navigated through that huge hazard, she encountered nine Zeelandic ships under Lieutenant Admiral Cornelis Evertsen de Elde. 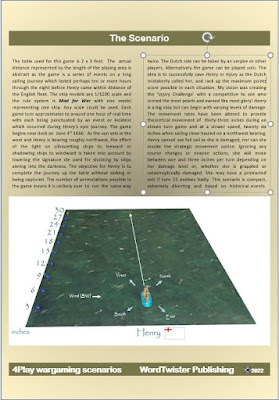 She fought off several of these ships and then refused terms from Evertsen himself, shouted across the gunwales of his flagship Walcheren.  Evertsen and de Ruyter both sent in fireships which set Henry alight and after freeing herself from these by boarding one, cutting it free and finally chopping away the second, she continued the journey having killed Admiral Evertsen with a valedictory broadside! The ordeal was not finished. A third fireship chased Henry off course prolonging her agony and had to be disabled by using her stern chaser guns loaded with chain shot to shred the enemy's masts and sails. 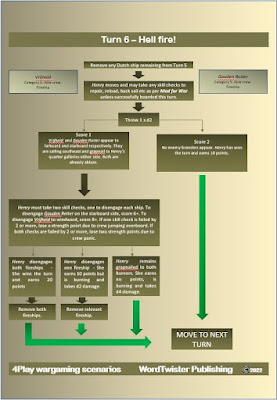 She disabled it and finally, reached safety the next morning. I found this unbelievable Hollywood style adventure so inspiring that I turned it into a programmed scenario which can be played solo, with friends or in a tournament where all players take a chance to sail Henry and try to beat each other's scores over the games breathless 11 turns. Points are scored for various heroics and hystrionics.

The scenario will be released shortly in the 4Play format under the title Escape from Serious Injury. Curious title? Well yes, but easily explained. Henry was often spelled Henery in the 17th century. Phoenetically this can sound, to a Dutch ear a little like Enyury or Injury and that is exactly what they believed the ship to be called. So, escape with Injury is Escape with Henry and maybe, she may just suffer some 'serious injury'. 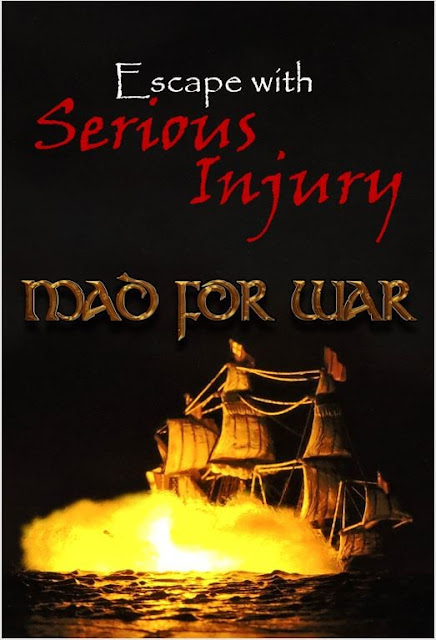 I am running a cut down 5 turn version of the game at Partizan at Newark on May 22nd and I would love some of you to come along and take the Serious Injury challenge to beat the 82 top score which stands so far. Should take 15 minutes or so.