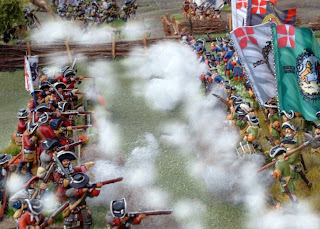 The Armies
Barry Hilton - During the Glorious Revolution period infantry were known as Foot. They were organized into companies varying in strength from 50 to 100 men. Several companies formed a battalion. Some regiments had a single battalion whilst others had several. Early in the period pikemen were still present in some numbers within each battalion in a ratio of around 1:5 with musketeers. Some evidence suggests that as late as 1704 the English had some units equipped with pikes in a ratio of 1:2 with musketeers. This was more to do with money than tactics and pikes would have been present in insufficient numbers to have affected army level tactical doctrine. Muskets were expensive, pikes were not. As time progressed, most armies phased out the pike. Regiments in several European armies fielded more than one battalion. This was very uncommon in the British and Dutch armies except in Guard units. There was epic level fraud committed by unit commanders because regiments were normally raised, funded and administered by their colonels. Monies were granted by Treasuries for maintenance and of course it would be in the interest of some avaricious and unscrupulous colonel to inflate his muster role by a significant percentage and pocket the difference. Recently I came across some information about a certain officer called Mr Harbord whose ‘troop of Horse’ appeared to be the guard for the Williamite army payroll in Ireland during the campaigns 1689-1691. It seems he may have appropriated the equivalent of £40,000,000 in modern money and got away with it! Move over Ronnie Biggs for the Great Wagon Trayne Robbers!
Foot almost universally operated in close order and their tactics were simple and linear. Movement was very slow compared with later periods. As training and drill were rudimentary and the line predominant, Foot tended to approach each other at a rate between 20 and 60 paces per minute. Prescribed rates were faster but the absence of cadenced march (movement to the beat of drums) and the constant need to dress the lines slowed everything down. The impact of evolving fire control doctrines amongst the different protagonists is the subject of continuing debate. Almost universally in the period units deployed in formations of up to 6 ranks. The favoured firing method was to discharge muskets by rank. As time progressed this was perceived by some armies as less efficient. It is interesting that France, the strongest military power of the age persisted with the older ways throughout the period. This should cast at least some doubt over the perceived efficacy of the alternatives. The French put more faith in the use of the bayonet than some of their opponents. The much discussed ‘platoon firing’ method (a favourite wargaming pet of Marlborough’s many fans) is thought to have been perfected by the Dutch and English during the War of the Spanish Succession. Its effect was considered more deadly than the systems used by other nations. Its basis was a continuous rippling fire delivered by different groups discharging in sequence but from varying positions in the battalion line. It required thorough training and competent officer control. Often battalions using this doctrine deployed in fewer ranks and thus longer thinner lines. 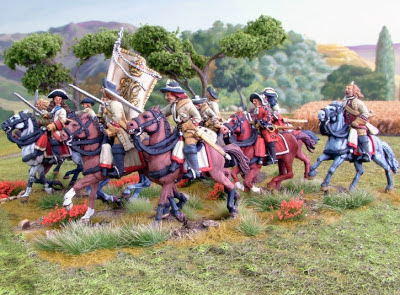 During this period cavalry were collectively known as Horse. This term covers the traditional sword and pistol armed cavalry of most armies. Some nations retained breast and back armour and occasionally lobster tail helmets. Certain regiments were equipped with a breastplate only. The vast majority however were dressed much as the Foot in a knee length coloured coat, broad brimmed hat with the addition of heavy riding boots. The French fielded only one or two regiments of cuirassiers at did the Dutch. The English after the 1680’s did not field cuirassiers. Often in Germanic armies all cavalry with the exception of mounted dragoons were cuirassiers (Kürassier). The French cavalry of the line were known as chevau-léger(light horse). In the 17thcentury this was a distinction in name only. It dated back to medieval times when lighter armoured sergeants were equipped differently to the heavily armoured gens d’armes (men at arms) they were tasked with supporting. Horse were expensive to arm and maintain but between 1660 and 1721 were numerous on the battlefield and often constituted up to one third of an army’s total strength. The basic organizational element was a ‘troop’ comprising of between 30 and 90 men. Several troops would make up a squadron and usually, several squadrons would make up a regiment. English regiments were small and would sometimes muster no more than 200 men. In contrast, Austrian cuirassier regiments often fielded 6 to 8 squadrons.
The tactics used by Horse varied between armies. They also went through phases of development and popularity dependant on which commanders were in charge at any given time. Those trained to charge at a rate between fast trot and gallop tended to use their swords as the primary offensive weapon. These would have higher momentum on contact. French 1679-1698, English & Dutch 1700 – 1715 and Jacobite Horse 1689-1691 were likely to have operated in this fashion although often it was down to the individual whim of the colonel how a regiment conducted itself in battle. Horse trained to advance at a slow trot almost to contact at which point they would discharge pistols constituted the balance. They would then close with the sword or other hand weapons. Through 1688-1697 English, Dutch, Danish and German Horse are likely to have operated this way and French from 1700 to1715. 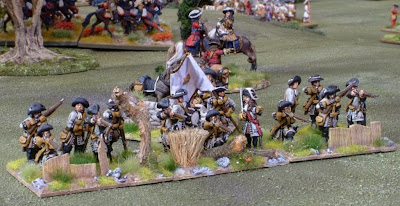 The role of dragoons was evolving during the period. Theoretically they were mounted infantry who rode forward and dismounted to fight. Often they would take and hold a position until reinforcements arrived. Increasingly they were being used in the mounted combat role. Often possessed of inferior horses and frequently not trained in the cavalry tactics of the day, they could for a limited time, stand up and be counted against Horse. When fighting mounted they formed in squadrons along the same principles as Horse. On foot they formed in battalions like the infantry. 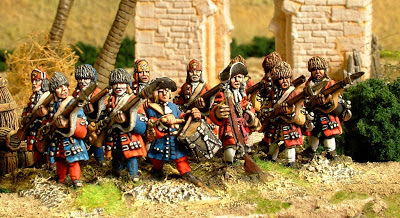 This period saw the use of grenadier battalions which were ad hoc formations drawn from the grenadier companies of various units. Each infantry battalion usually possessed a grenadier company. In theory, these men were the biggest and bravest and consequently received the most dangerous jobs such as assaulting prepared defences. They would lob or bowl underarm their sputtering, fused granadoes (grenades) kept in a large pouch slung over the shoulder or attached to a waist belt, then charge forward. Many were equipped with hand hatchets to chop down defence works. Units of grenadiers would be extremely colourful because of the wide variety of coat and facing colours which appeared in each composite unit. 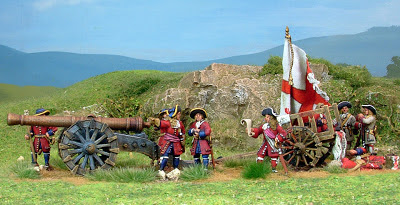 This period saw the beginnings of professional artillery corps which would come to dominate the battlefields of the world from the late 18thcentury onwards. At this stage however the fledgling formations were limited in their scope by extremely heavy guns which were not served with an efficient support network. A few professional technicians directed operations and utilized a large quantity of untrained strong-backs to do the manual work. Artillery was not fully militarized and so its use was somewhat restricted.
Share Share on Facebook Tweet Tweet on Twitter Pin it Pin on Pinterest
Back to The League of Augsburg