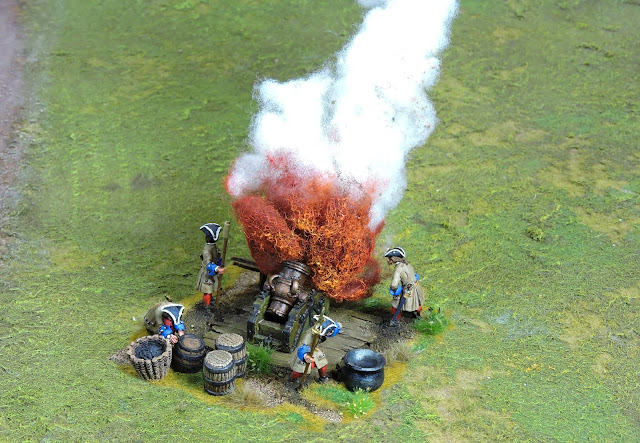 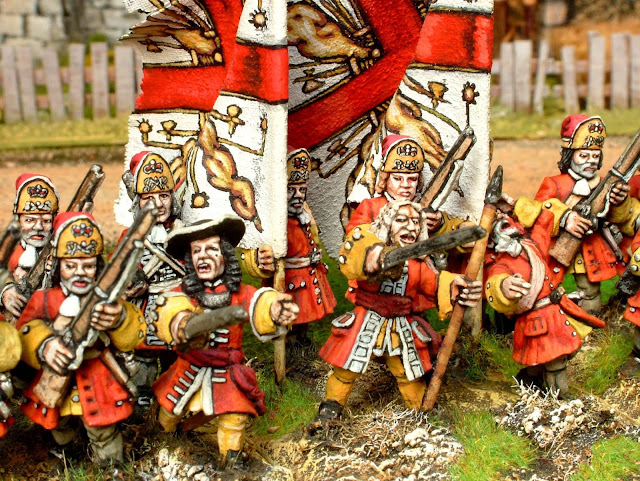 The French order of battle around Camaret Bay could look as follows:
1 battalion of Marines (all musket), 4 battalions of infantry (pike and musket), 3 regiments of Horse, 1 regiment of Dragoons, 1 battalion of Militia. 3-5 field guns in various positions. At least half of the infantry could be in hard cover or entrenchments. 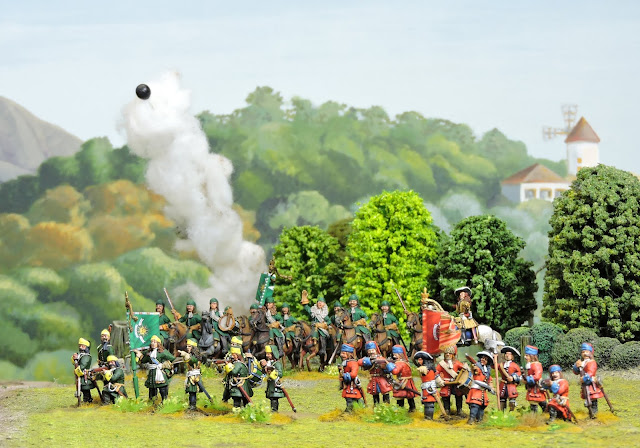 Skirmish gaming possibilities
Camaret offers magnificent scope for skirmish gaming high adventure. I of course have Donnybrook in mind when offering these ideas as the rules were created precisely for this period and this kind of game. Consider the following options around which to build a scenario; 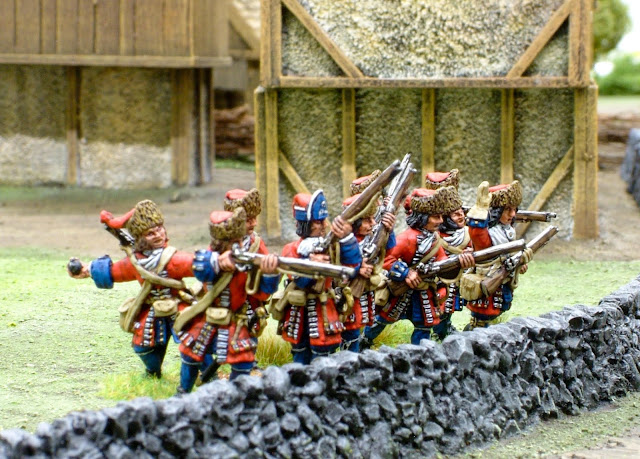 Take and hold
Several groups of English grenadiers must disembark in the shallows, storm a French redoubt containing a field gun, plant the English flag in the objective and then hold it against counterattacks for a set number of turns. The English should outnumber the French 2:1 in the initial phases of the game. The French can receive drip fed reinforcements and work up to a possible counter attack. The English in the defensive phase could receive further reinforcements from the water’s edge. 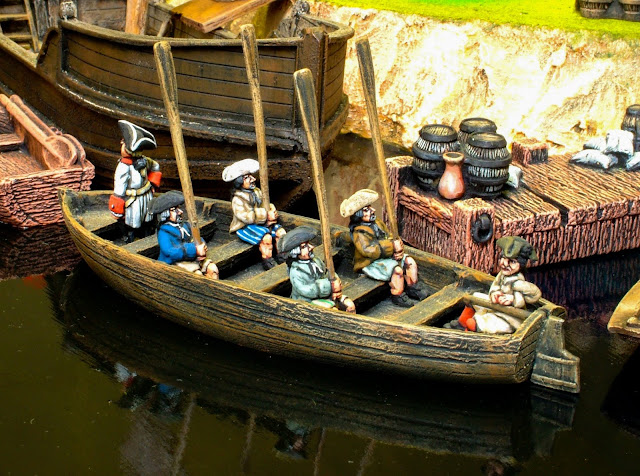 Save the General!
General Tollemache has charged up the beach with some of his boldest grenadiers and in so doing has placed himself in the gravest danger. He is struck by a cannon ball and falls terribly wounded within the first line of French positions. His retinue and reinforcements from newly landed boats must protect the General and carry him back to his transport so that he can be rowed to safety. The General will require two unarmed men to carry him and they will do so moving at variable speed no greater than half of the normal move distance per turn. The forces should be roughly evenly matched from the game commencement with random reinforcements for each side. The game is over if Tollemache is saved, killed or captured. 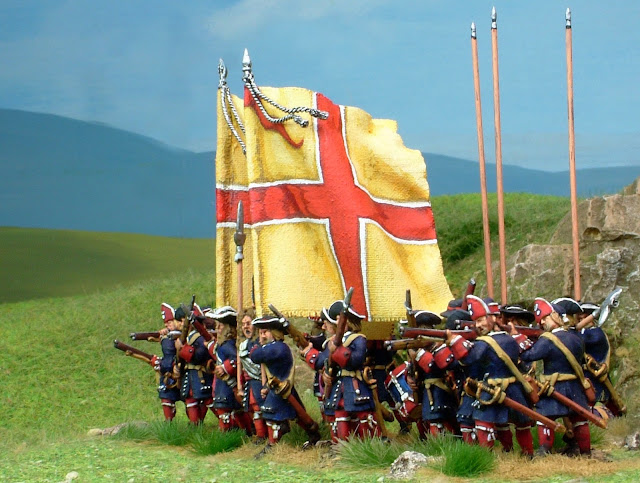 Drive them into the sea!
The English are disorganized and demoralized along a stretch of shoreline in Camaret Bay. They must either; try and pull together and advance or, retreat back to their boats and row for the safety of their fleet. French Horse and Marines are poised to counter charge and sweep them back into the sea. Place several groups of English grenadiers behind rocks, shattered boats or abandoned enemy defence works and allow the French a 2:1 advantage. The English should be set parameters to extricate their survivors with a win set at around half or more escaping.
In setting the quality levels for each side remember that the English grenadiers should have high quality with the French being in the main regular troop quality with the possibility of some militia or elite groups among them. 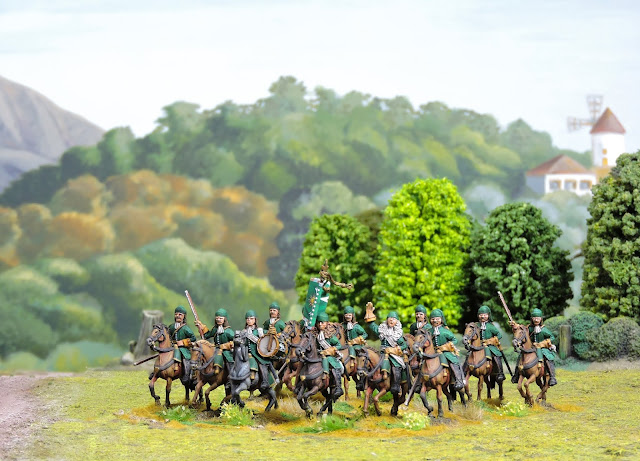 Stellar cast of characters
There is a wonderful opportunity to incorporate plenty of Hero characters. Another good option would be to provide close in naval support from the Marquis of Caernarfon in his super-fast yacht the Peregrine. The madcap nobleman could become a wildcard character in the amphibious operations. There is also a chance to roll in a star studded cast of other personalities including Brigadier John Cutts considered by some as a fearless and inspiring warrior impervious to personal risk and by others as a dangerous psychopath who is likely to get everyone around him killed. He has already been wounded almost fatally, several times in his career. At 33 years old he is at the peak of his physical prowess and has a deep loathing of the enemy which drives him to acts requiring nerves of steel. Mestre de Camp Le Comte de Servon, Brigadier of Infantry Sieurs de Vaise and Brigadier of Horse Du Plessis all seem to have been near or involved in the hand to hand combat on the beach and Le Marquis de Langeron was leading the French marines. There is of course the tantalising possibility that the great Vauban himself strays too near to the action and is captured or killed by the English attack! 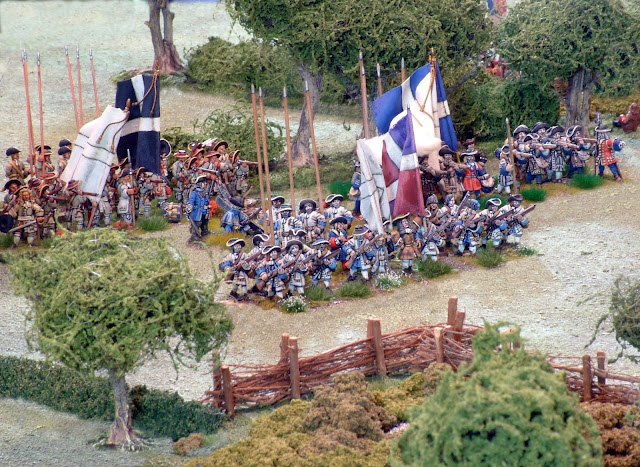 Have a look
I strongly recommend a visit to Google Maps. Search Camaret-sur Mer, Brittany. Switch the view to Earth and zoom in on the area of Camaret Bay. The long sand/shingle strip where Tollemache landed is still clearly visible as are several of the Vauban positions built in the area. Note also the narrows ‘Goulet’ through which the Dutch and English ships had originally intended to sail to reach Brest. The crescent shaped bay in the open sea is where the armada dropped anchor and disembarked the English troops. The sketch map provided is drawn from a very accurate 1780 watercolour print made in France with the position of the entrenchments, forts, batteries and defences all meticulously marked and to scale. 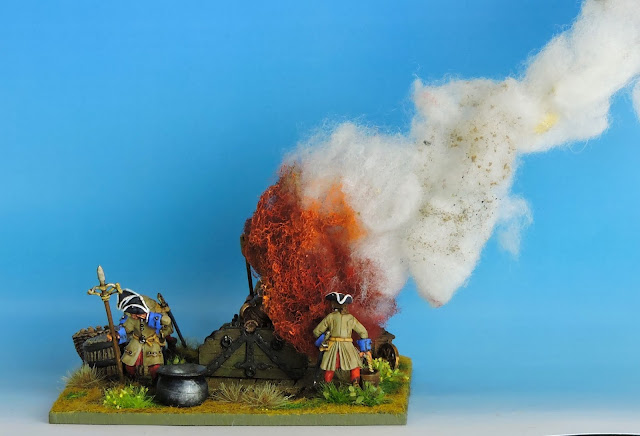 Conclusion
I have provided a non-prescriptive map to aid with planning a potential scenario but have deliberately avoided army lists and set up positions as there are so many possibilities beckoning from this little remembered but historically significant chapter in the great struggle against Louis XIV.
Bonne chance mes amis anglais à l'enfer qui est Camaret!