David O'Brien - The first time I painted this battalion way back in the late '70's I knew nothing of the history or family connection with this unit. I was asked to take part in a 15mm Seven Years War campaign and they were looking for more French players, I was shown loads of illustrations of uniforms to choose from but thinking that most of them looked boring in white/light grey but some in red coats stood out especially the one with yellow facings plus I loved the flags so the regiment was duly painted up from the old Minifigs soldiers that used to be sold in strips. This particular campaign didn't last too long mainly because none of us were too taken with the 15mm figures and they were sold at the old Northern Militaire wargames show.

The next attempt at painting this regiment was a few months later and this time it was using Minifigs 25mm figures and using the WRG rules. It was only at this time that I found out that this unit was an Irish unit called Clare fighting for the French and for the moment that was as far as it went. This campaign lasted for about six months and again the figures were sold off and for a couple of years I got sucked in by various other periods.

I was eventually asked to take part in some Marlburian games and was sucked back in but this time I was asked to paint British troops as they had enough French players. One of the first units I painted up this time using Foundry figures was Webb's Regiment which had the same yellow facings as my favourite French unit. We were still using the WRG rules with 24 figure units but not long after we switched to Koenig Kreig rules which only used 12 figure battalions so half of Webbs now joined the Hanovarian army for a couple of years. Eventually I got involved with Barry Hilton and his Beneath the Lilly Banners rules which I much preferred, the only problem was that those rules used 18 figure battalions so half of the Hanovarian unit rejoined Webbs and the remaining 6 were put aside. Although my troops were all for the War of the Spanish Succession it was Barry that started to get me interested in the Jacobite Irish campaign and realising I knew very little about the period I started doing some research then found that some regiments had been formed by D. O'Brien.

The D. O'Brien was actually Daniel O'Brien 3rd Viscount Clare and he formed three regiments in 1689 to support James II for fighting in Ireland. He himself commanded Clare's 'Yellow' Dragoons, whilst his eldest son commanded O'Brien's regiment and the youngest son Charles commanded another one. It is the regiment commanded by the eldest son that was transferred to France in return for supporting French troops sent to Ireland and O'Briens went on to carve out an unrivalled name for themselves as part of the Wild Geese and fought in every major French battle in the 18th century. 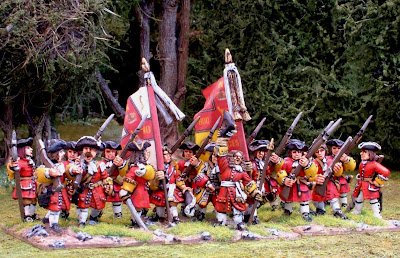 Having had enough of painting Brits those 6 discarded troops were brought back out of their box and given another 12 reinforcements they returned as my favourite 'French' regiment. The regiment was known as O'Briens for the first few years of its existence in France until the father died and the eldest son now became the 4th Viscount Clare and it remained as Clare for the rest of its career until it was combined with Berwick's regiment in 1775.
Daniel didn't remain in charge of the regiment for long as he died of wounds received at the battle of Marsaglia in 1693 and the regiment was led by Richard Talbot until he was imprisoned in the Bastille by Louis XIV and the youngest son Charles now took command in 1696. From this point on the O'Briens either led or held major ranks in Clare's regiment throughout it's history. 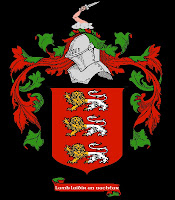 I've never managed to come  across any specific reasons why the Irish regiments wore red uniforms. I did read a reference in the past that mentioned that O'Briens had been given light grey uniforms when they arrived in France but quickly dyed them red. I assume the yellow facings come from the O'Brien coat of arms.

Likewise I have never managed to find any definite information on Clare's Yellow dragoons, was this because of the colour of their facings or did they wear yellow jackets which I have seen in some illustrations.
There had been a previous Clare's regiment formed by the 3rd Viscount when he raised a regiment of Irish troops for the Dutch States army in 1674 which he only commanded for a year before being dismissed. The regiment went through a few commanders until Thomas Tollemache commanded it in 1685 when the regiment was transferred to the English establishment and ironically went on to fight against king James in the Irish campaign. This regiment later became the 5th regiment of foot and finally the Northumberland Fusiliers with their home base at Alnwick which is only about 60 miles away from where I currently live.
Unlike 'Sad Git' Hilton, I don't keep records of my units so I can't tell you how many battles they have won or what they had for breakfast, the only comment I can make is that under my command they have never been defeated but I'm sure that's a record that due to end in tears.
I hope this short history has inspired you to get out and paint more of these fantastic Irish troops?
Share Share on Facebook Tweet Tweet on Twitter Pin it Pin on Pinterest
Back to The League of Augsburg