by Clarence Harrison August 09, 2013
Clarence Harrison - After reaching England in 1689, King William III established three regiments of Huguenots drawn from exiled French serving among his other battalions. These regiments were commanded by well known and experienced soldiers Pierre Massue (Comte de La Caillemotte), Francois du Cambon, and Isaac de La Melonière. Colonel De La Melonière was a former Lt. Colonel of the Anjou regiment of France. Though the core of these new units were French their numbers were supplemented with Swiss, Fleming, and German Protestants (and a number of Catholics as it turned out, six of whom were later hanged as Jacobite spies).
There is frustratingly little information on the uniforms and flags of the Huguenot regiments. Most sources seem to agree that they wore grey coats. There is a painting by Jan Wyck that shows a Huguenot regiment through the mists of battle in the background that contains small touches of medium blue where we might expect to see turnbacks. If one regiment wore blue facings, it is possible that all three did - the French practice at the time was to use red facings unless the colonel paid for something different. It is also possible that the turnbacks were simply the same color as the coat and that is why history makes no mention of the colors. For De La Melonière's regiment I have chosen the later option. These coats, trousers and turnbacks of these models were painted with Wargames Foundry British Gun Grey 108A-C. Might be a little dark, but I like the grim look it gives them. I will probably use blue for the facings of one of the other regiments... 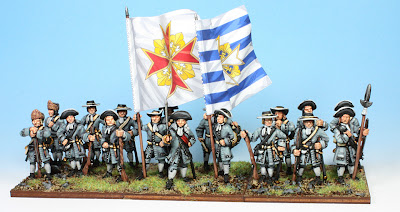 There is some debate about the color of sash worn by the officers. Again we have no information, but rather than seeing this as an impediment, look at it as a chance to employ artistic license! You could paint the Huguenots with orange sashes since they fought for William. Equally you could field them in red sashes since they were raised after Willaim claimed the throne of England. Finally you could make them more unique and paint white sashes, the traditional color worn by Huguenot officers in earlier wars. In the end I chose red for practical reasons - with a flag swap I can field the unit as an unknown English, Irish, Dutch, or French battalion!

I want to point our a couple of conversions in the unit. At this time, there are no Warfare Miniatures grenadiers loitering around, featuring instead action poses advancing, shooting, throwing grenades, etc. I wanted a couple of models as the ready to match the rest of the unit so I set out to create some. These were simple head swaps and then I added a grenade pouch sculpted from putty. I also added a hatchet to the guy in the front with another tiny amount of putty and a piece of wire (hmmm... the ax doesn't really show up in the photo because I painted the handle black - probably worth going back and making it brown!). 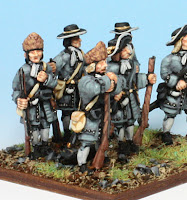 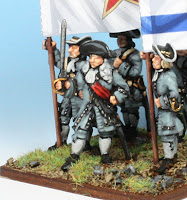 The second conversion was equally simple. I filed the details from the scabbard of a sword to make it appear as an unsheathed blade. The I trimmed a tiny amount from the hand of an ensign model for a perfect fit to the hilt. I could have just as easily swapped an arm from one of the cavalry models, but I need all of my spares at the moment for the Huguenot horse (coming soon)!
Share Share on Facebook Tweet Tweet on Twitter Pin it Pin on Pinterest
Back to The League of Augsburg