Clarence Harrison - The Danish Royal Life Guards or Den Kongelige Livgarde til Fods is the first unit of Warfare Miniatures I painted when I kicked off my 1690 project in December 2011 and it is still one of my favorites from the collection. Sadly, NONE of my units have yet seen action on the field, but I intend to record their battle honors when they do!

The Danish Foot Guards regiment was raised in 1658 as the personal guard for King Frederick III during a time of political upheaval in Denmark. War with Sweden revealed the aristocratic rule of the hereditary landowners to be incompetent and corrupt. Kings could not take the throne without signing a charter agreeing to limited sovereign power. The defense of Copenhagen required more authority be granted to the king - and lessened the power of the aristocracy. The defeat of Sweden gave Frederick III the full support of his citizens and led to the restoration of the hereditary monarchy in 1660. The elite Foot Guard, loyal only to the king, ensured that none of Frederick III's political enemies thought to oppose the new absolute power of the throne.

August 15, 1689 King Charles V signed a treaty with King William III to provide 7000 Danish troops to the Grand Alliance. They took an oath of loyalty to William III and would serve for the remainder of the war unless Denmark was attacked, in which case the Danish units would return home (and any aggressor would also be an enemy of the Netherlands and England). They fought in every major battle in Ireland and Flanders, normally in the front lines where the action was most fierce. The colonel of the Royal Life Guards, Ferdinand Wilhelm Herzog zu Wurttemberg-Neustadt (remember him?) was chosen by King Charles V to lead the Danish expeditionary force in Ireland.

In Kjeld Hald Galster's book Danish Troops in the Williamite Army in Ireland, he always refers to the regiment as the Royal Life Guard. This made me curious so I looked at the official website for the modern version of regiment and in the history section it shows this:

Most of the sources we've had until recently always referred to the regiment Garden til Fods at the Battle of the Boyne, but it looks like Mr Galaster's title is the correct one for Ireland and the rest of the Nine Year War. One of the most fun things about this period is continually finding out new information on these armies (Mr Galaster's brief description of the Battle of the Boyne also has a slightly different brigade structure than I've seen elsewhere for the first line of Williamites to ford the river so I look forward to digging into that)!

The Battle of the Boyne was the game Barry and I put on at Historicon 2010 (seen above - models painted by Barry Hilton) and the Royal Life Guards were one of the units on the table. I have since learned that the flag seen in this photo would have been carried in Flanders, but not in Ireland since the Order of the Elephant emblem depicted on the flag was not established until 1693... Again, the stuff we learn...

Here is my finished unit, sporting the official Quindia Studios version of the earlier flag (thanks, Dan Schorr). This is the version carried in the Skanian Wars and we are not certain it would have still been in use in 1690, but it seems a good guess. The 1693 versions of the Danish flags will be available from Warfare Miniatures later this year... 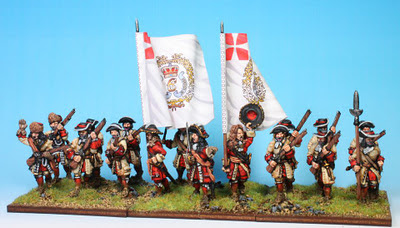 The coats were painted with Foundry Boneyard A and highlighted with Foundry Boneyard B. The cuffs, waistcoat, and breeches were painted with Vallejo Red (70926), Flat Red (70957), and final highlights of Scarlet (817). I should point out that the grenadiers probably did not have fur caps in Ireland. It would be more accurate to field them in cloth caps or simply floppy hats like the rest of the unit... Something else I learned after the fact, but they look cool so I'm keeping 'em now! Of course they are based for Beneath the Lily Banners!

While they have yet to take the field (I am furiously trying to build up enough models for a game), I will record their actions on the table in the same way Barry has.