Barry Hilton - The Dutch Foot Guards or Gard te Voet or Blew Guards is a regiment the name of which is writ large during the period 1688 - 1714. By reputation they were probably the superior Grand Alliance unit of the time and heavily involved in the major campaigns of William of Orange and on. My first encounter with the Blue Guards was as part of a friend's collection in 1992. I watch them stand resolutely in Laer as I threw battalion after battalion of French infantry against its impenetrable defences. I became fixated on annihilating them. Even though they had only three figures standing at the end of the battle I failed both to destroy them and to take Laer. Those glossy and very plain models stood taunting me behind the resin gabions which they had defended. A beacon marking my total failure to emulate Marechal Duc de Luxembourg's victory at Neerwinden in 1693.


Alasdair had used particularly stiffly posed Essex Miniatures models which to all of us looked extremely like old wooden clothes pegs! They became known as the 'clothes pegs' and a bogey unit for me to chase whenever commanding the legions of Le Roi Soliel which between 1992 and 1994. As I have come to learn at some cost over the years, no matter how poorly a model is sculpted or painted or based it has no effect whatsoever on their ability to win or annoy the life out of you in a wargame.

I have never actually recorded the service history of any Gard te Voet battalions although I have painted at least four. I still own two but will probably sell those off when I finally finish a Warfare Miniatures version.


I have rubbed up against these lads many times on the table and usually come off worst. Having walked on the banks of the Boyne where they crossed under the fire of Jacobite infantry and looked from their the lines at Neerwinden when they stood valiantly but vainly against the Gardes Francaises, I must confess to a grudging admiration for these very tough soldiers. 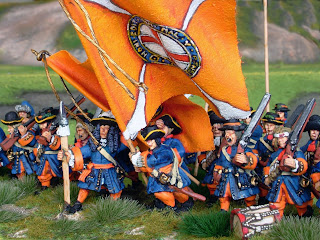 The plainness of their dress without lace or feather seems completely in tune with the grim and desperate struggles they were involved in. In truth, I think far too little acknowledgement is accorded to the disciplined and determined Dutch infantry of the great wars against Louis XIV. Truly it was the Dutch who shouldered most of the responsibility to keep the megalomaniacal King of France in check.


There still appears to be some doubt as to whether their facing colour was orange or red. I have seen them painted in a variety of facing colours including buff, yellow, pale orange, bright orange and red. I have seen their coats painted on shades from a pale grey blue through to deep navy, Were their neck cloths black or red or white? Which standards did they really carry in the different phases of their campaigns?  Warfare Miniatures offer 6 different variants and these are only for Ireland! Did they have three battalions or two and a detachment of cadets? Whatever the truth the Blew Guards are an iconic regiment and this post puts them once more in the spotlight.


Clarence has beaten me to the punch by producing his own Warfare Miniatures Gard te Voet battalions. This is what I have to aim for when I finally get around to producing the regiment. Clarence has chosen to show the lads with shouldered muskets, probably just prior to wading chest deep into the swift flowing River Boyne opposite Oldbridge.  The flags are from Quindia Studios and are available in the League of Augsburg shop! This regiment in focus shows seven different interpretations of colour, models and style.