Barry Hilton - I fell in love with the idea of the French Foot Guards the first time I saw them on a friend's wargames table in 1992. The figures were the very ones I used for my own regiment seen above; Dixons Sedgemoor infantry sculpted by Mark Copplestone. These characterful models are of course quite wrong for the royal Frenchmen in many areas; coat decoration, hats, equipment orientation and such like however, there was nothing else available at the time and they just looked great! My friend at the time had two battalions, gloss varnished but glorious and I wanted some. The figure on the far left of the front rank is the very first Grand Alliance period figure I ever painted and I still have him(and them). My regiment pictured had a tart up in the mid 90s when I solidified the painting style a little and was more definite with colours such as black and blue.

Of course, Warfare Miniatures are about to release our very own Gardes Francaises sculpted specifically for the glorious period between 1689 and 1697 when they swept all before them. 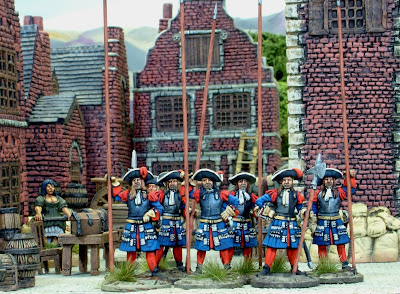 Why would you want such troops in your army? Well that seems almost a stupid question but not really. The Gardes Francaises were not held in reserve and for show. They were a key battlefield asset which often featured prominently in the attack. With six powerful battalions they provided Louis XIV's marshals with a sledgehammer with which to break down the enemy's door. At Neerwinden in 1693 they did just that, facilitating a great victory. Pikemen with armour, musketeers with dashing, ribbon and feather festooned attire the Garde of this period are even more attractive than Napoleon's famous Garde Imperiale. 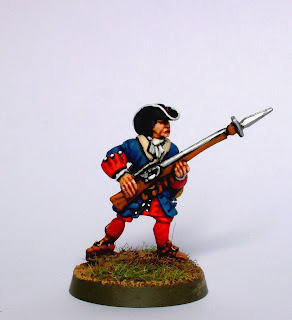 My Gardes Francaises were painted in 1992. They have fought 30 actions and achieved two distinctions. Their average battle losses are 18%. They have captured the colours of Kirke's Lambs. Regrettably their own colours were lost once. Finest Hour: Engaging and bayonet charging Kirke's 'Lambs' at Neerhespen 1693. This was a scenario soon to be featured on the blog concerning the French pursuit(which never happened) after the great victory at Neerwinden.

Darkest Hour: Routing and losing their colours during the worst French collapse I've seen, a refight of Fontenoy placed in the Grand Alliance period- ugh! It is my plan to retire these fine fellows shortly to be replaced with a new battalion of Warfare Miniatures Gardes Francaises. 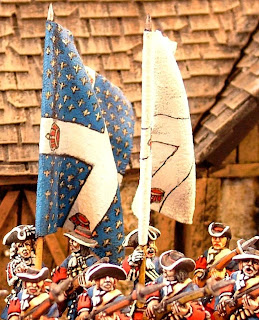 When Clarence and I were first putting together ideas for Beneath the Lily Banners I wanted the cover to illustrate the coup de grace delivered by the Gardes at Neerwinden. We then had a case of life imitating art imitating life. Clarence designed the cover from my idea of what I imagined the fighting around Laer may have looked like. From his cover art I then modelled a diorama of the cover! Here is the cover of BLB1 (now only available in PDF): 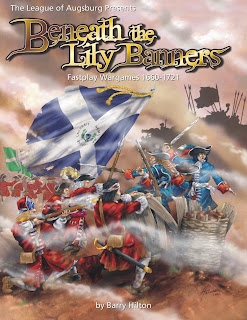 This chap is a minor conversion I did on a Front Rank model for the diorama: 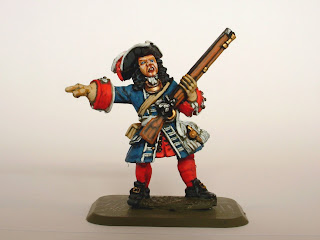 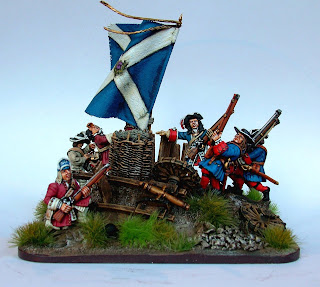