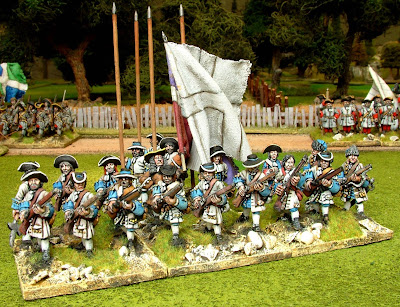 Barry Hilton - I absolutely adored painting the Copplestone designed figures offered by Dixon. The first French regiment I ever completed were these garcons. I recall the logic of choosing Regiment Languedoc at the time. I was still experimenting with the period, painting and basing styles thus picked a unit which was not too well known so that if I made any mistakes they would not blow the quality of my star battalion and put me off building more! I wonder if anyone else applies that somewhat risk averse approach. Almost like saving the best bit of your dinner till then end.

Languedoc were painted in 1992 and originally had 16 models, four per base. They were finished exactly in the same style as Mackay's, Prinds Georg, Montcashel's, Sjaellandske, Skaraborg and Ramsay's all of which were in my first batch of completed units. I later rebased them in BLB style, brightened up their uniforms, gave them new (larger) colours and changed their scarlet neck cloths to white. At the same time I added in several more models.

Of course in many respects they are unsuitable for French Grand Alliance period infantry. I know that now, 20 years on. Wrong coat cut, apostles when they probably should have flintlock and bag, grenadiers with fur hats, no ribbons. They have however, served both King Louis XIV and myself very well. 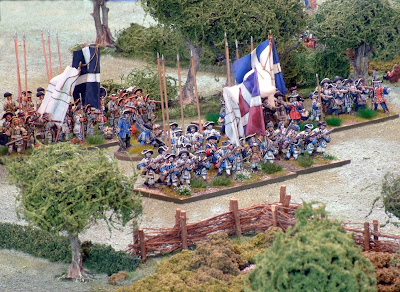 They have fought recorded 56 actions during which they achieved eight distinctions. Their average battle losses are 17.3%. Their own colours have been lost four times. Their finest table top hour came when they were the first French unit into Neerwinden (1693). They raised their battalion drappeaux on the clock tower to signify victory to Le Roi Soliel. They chased the Cameronians through the town on that particular occasion! Having fought this battle so many times and finally getting a French win was very sweet. The game was a mega affair in 1996 with about 4,000 figures.Also in the same year they stood before a village and were wiped out in a fire fight without a deterioration in their morale status! They once captured a heavy gun battery. 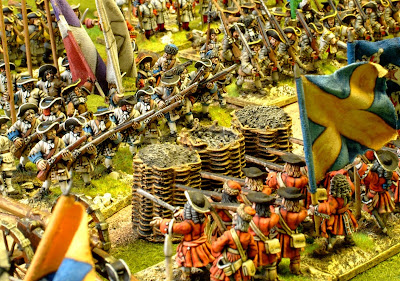 Their darkest hour came with a humiliating surrender without a fight at Branxton Hill in a 1689 scenario based around the Glorious Revolution. I recall the entire French contingent of a Jacobite force was cut off at the foot of Branxton Hill (The site of the Battle of Flodden in 1513) and compelled to lay down their arms to the enemy.

They are my oldest native French unit, real veterans and now due for retirement as the Warfare Miniatures French models begin to appear in the collection. 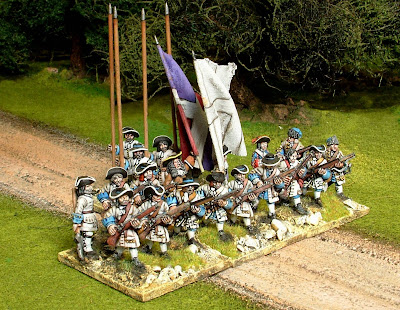