Final News on Plans for Historicon

by Clarence Harrison July 06, 2016
Clarence Harrison - Ok, Historicon is next week! The only thing I have left to do is paint the edges of the boards (working on them tonight) and paint four models for the crew of the Kestrel. Everything else is ready. The Hilton invasion has even begun (no need to hide your wives and children as he brought his own... mind your fruity drinks though). I am due to pick him up in Richmond next Wednesday, but he will be rampaging around Florida until then.

The theme for Historicon is Cavalry, Mounted Warfare Through the Ages. Barry left the subject of the game to me and I chose the Battle of Pennyburn Mill because the encounter featured lots of the dashing cavaliers. Some of my existing forces were pressed into service which was fine because we don't know most of the uniforms from that part of the period. However, once we started working on the uniform books, it became apparent that the mounted forces of Derry probably didn't have many uniformed cavalry and one of the two Jacobite formations involved was a scratch company made up of men gathered quickly by their officers.

This bothered me. We were going to be presenting the game with copies of the uniform plates at the table and all of my horse were smartly arrayed. It wouldn't really matter but it still bothered me. I had units with red coats and units in grey and tried mixing the stands. That helped a bit. Early during playtesting, I pressed some of my ECW cavalry into service to make up numbers while I was still painting and the boxes were still in the game room and as I sat staring at the array of horsemen I hit upon the cunning plan... 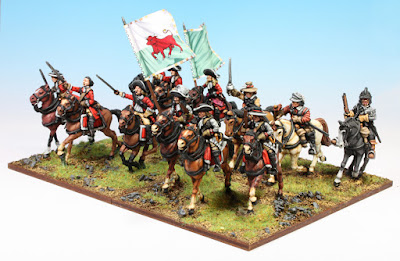 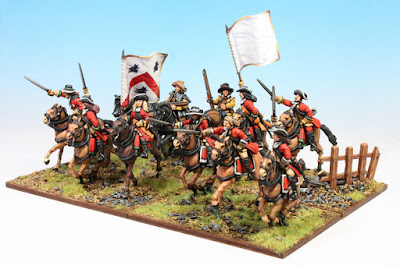 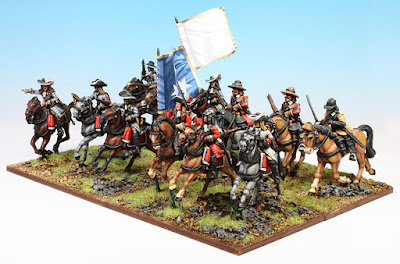 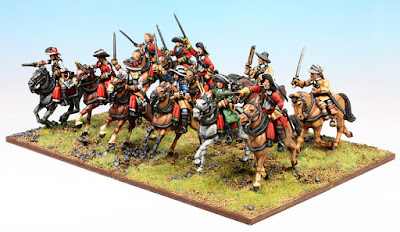 Ok, there are a few anachronistic bits, but individuals still provided their own gear at this stage of the war and it is not unreasonable to assume some turn up with kit from the ECW. While I would have liked to field four regiments of motley civilians, the effect I was able to achieve does the job. Hell, they most likely didn't carry standards either, but I reserved that bit of realism for the scratch Jacobite unit. The flags were necessary for identifying the units on the wargame table and besides, they look better! 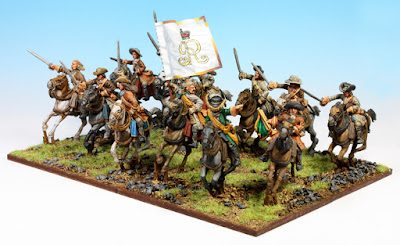 Also, here is Lord Galmoy's regiment - another commission painted by Rob Goodyear of Polymath Workshop and based by me to match the rest of the collection. Like the commanded shot from last week, this unit is for sale at the show. Come see us at the table to ask about the price. 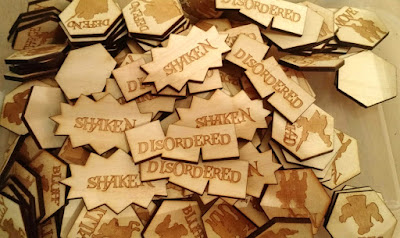 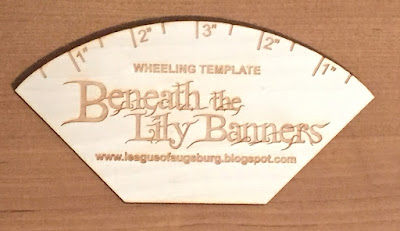 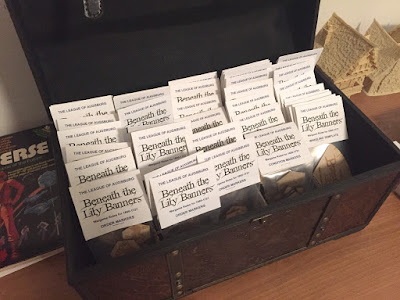 We will be featuring some new Order Markers, Condition Markers, and Wheeling Templates in the games. There will be a limited number of sets available from Le Roi Soleil, the official US dealer for Warfare Miniatures who will be in attendance. I designed these, but my brother Dennis is the one who actually produced them. The Order Marker sets come in packs of 24 (4 of each order) and the Condition Marker sets are in packs of 16 (4 each for Disorder, Shaken, Retreat, and Rout). We are still exploring the possibilities of having access to a laser cutter...

Finally, besides our six games, Barry is hosting two seminars...

Friday 6:00-7:30p
Decisive Results on the Table Top.How to plan and execute table top refights of large historical battles while reaching a decisive conclusion within the available time.

Saturday 5:00-6:00p
Why are Wargames Light on Cavalry?A look at mounted troops across history and the part they could play in table top games. Learn about the assembly, organization and use of cavalry components in wargaming, with special emphasis on the 1680s-1815.

Mr Hilton was inducted into the HMGS Legion of Honor last year and sometime on Friday will receive his award during a brief ceremony as well. I'm not sure this is a public event, but thought it was worth mentioning. The HMGS Legion of Honor was established by the HMGS Chapter Board in 1995 specifically to provide a means by which the recipient of the Society's lifetime achievement award, the Jack Scruby Award, might be chosen every other year. As such it was thought that members of the Legion should also be chosen for their distinguished service to the hobby if they were to act as electors for such an important process.Thus today the Legion acts as a self-electing honor society that not only decides the Scruby recipient, but also serves as a source of inspiration and achievement to which all miniature hobbyists might aspire. I can think of no more deserving wargamer.

Right, so that's it! I'll try to post a few times during the show, but our schedule is fairly heavy with games until 6pm every day. We also need to pack everything away every night because there are no secure storage facilities at the hall for GM's. By the time there's been dinner and drinks, I may be too knackered to fiddle around getting photos uploaded and tap out something coherent, but we'll see. We will definitely take lots of photos and have full reports of the event afterwards.