Final Notes on Historicon 2016 from the Colonies

Clarence Harrison - I've just finished going through my notes preparing records for my own Glorious Obsession. It is impossible for me to do a write up on every game we ran, but I wanted to highlight some of the action.

First of all, hats off to Captain Murray who had to be the most active officer on the table. He was killed in game one by an errant shot (Event Card) that caused the rout of the Williamite center on the last turn of the game, fought a personal duel on the crest of the Pennyburn Bridge and killed General Maumont in game two, led a charge that recaptured a lost standard in game three, 'rescued' General Maumont's Mistress from the Jacobite camp and led the most decisive win of the week in game five with a victory called after eight turns (out of ten), and got caught up in a retreat and drowned in a bog in game seven. He personally led multiple cavalry charges. His first squadron was ALWAYS the first over the bridge in the assault and were routed or destroyed in every game except one. His second squadron fared slightly better and managed to survive four games, but suffered capture in game two. Bull's cavalry suffered serious casualties as well, but not in the spectacular fashion of Murray's!

Lord Grand Priors's battalion fought well. They were deployed near the bridge and had to withstand multiple cavalry charges almost every game. They managed to capture colors from both of Murray's squadrons in game two.

The Kestrel proved to be an entertaining part of the scenario. The effectiveness of the guns varied depending on the skill of the players with maneuvering in the current, but it did reduce a scratch squadron of Jacobite horse to a bloody smear at near point blank range in one game. We had a boarding action once when Jacobite troops launched a small boat to pursue the ship. Another game featured a waterborne 'sniper' duel when a lone soldier (his partner fell overboard) spent the session picking off crew men. Near the end of the game, the captain became so alarmed at the losses that they turned loose a full broadside at the little boat... by turn ten the launch was sinking, but the sniper managed to paddle to shore! 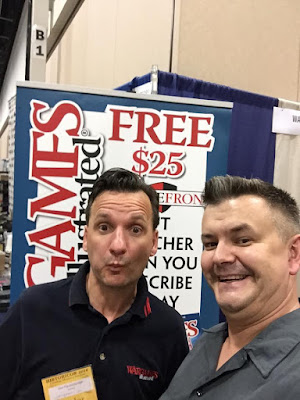 Besides all of the enthusiastic gamers at our table, I had a lot of fun hanging out 'after hours' with people I had only really conversed with online, including Dan Faulconbridge and Dave Taylor.

So how was the rest of Historicon? Well, I don't really know. I didn't get away from our table often. There was a few grumbles about registration (which I think I avoided as a GM who checked in Wednesday night), but for the most part everyone I talked to seemed to be having a good time. I've seen other negative comments that it was too hot in the main hall (which I never noticed), a funny smell (besides the great smell of hot dogs grilling near by, again I didn't notice) or there weren't as many people (several dealers I spoke with said their sales were up). I guess I was just having too much fun...

It was also great to get to hang out with my partner in crime (photo above the only proof I've seen that we were BOTH at the table - from Thomas Grove). We've only been in the same city twice in the ten years we've been working together so it was good to be able to sit down and share a beer (well. ok lots of beers). I honestly don't know if we'd get anything accomplished that didn't including toy soldiers if we lived on the same continent...
Share Share on Facebook Tweet Tweet on Twitter Pin it Pin on Pinterest
Back to The League of Augsburg